One of the most anticipated releases of the past few years has finally arrived with Animal Crossing: New Horizons.

This something different about Animal Crossing though, as it has the power to appeal to both casual and diehard gamers, making it one of the few games that have an ability like that.

As a result, you’ll see friends who haven’t shown an interest in video games before getting excited about Animal Crossing.

To be fair, it is an exciting day and it’s looking like Captain Marvel actress Brie Larson has already been swept away by all of it.

In a post on her personal Instagram page, Larson revealed she was “already obsessed” with Animal Crossing: New Horizons, and we can certainly rest assured that she’s not the only one feeling this way.

“Already obsessed with #AnimalCrossing: New Horizons! I’ve missed Tom Nook so much,” she wrote as part of a paid promotion with Nintendo. “If you are looking for sweet ways to spend time at home, I highly recommend you grab your #NintendoSwitch and escape to your own island getaway. Now, who has iron nuggets they can give me?”

#ad Already obsessed with #AnimalCrossing: New Horizons! I’ve missed Tom Nook so much! ? If you are looking for sweet ways to spend time at home, I highly recommend you grab your #NintendoSwitch and escape to your own island getaway?Now, who has iron nuggets they can give me? @nintendo

In her post, you can see her wearing the now-iconic Tom Nook island getaway shirt, but that’s not all. Eagle-eyed fans can also see she has the exclusive Animal Crossing Nintendo Switch.

She gave a better look at it in her Instagram story, which proves how big of a fan of the series she really is. 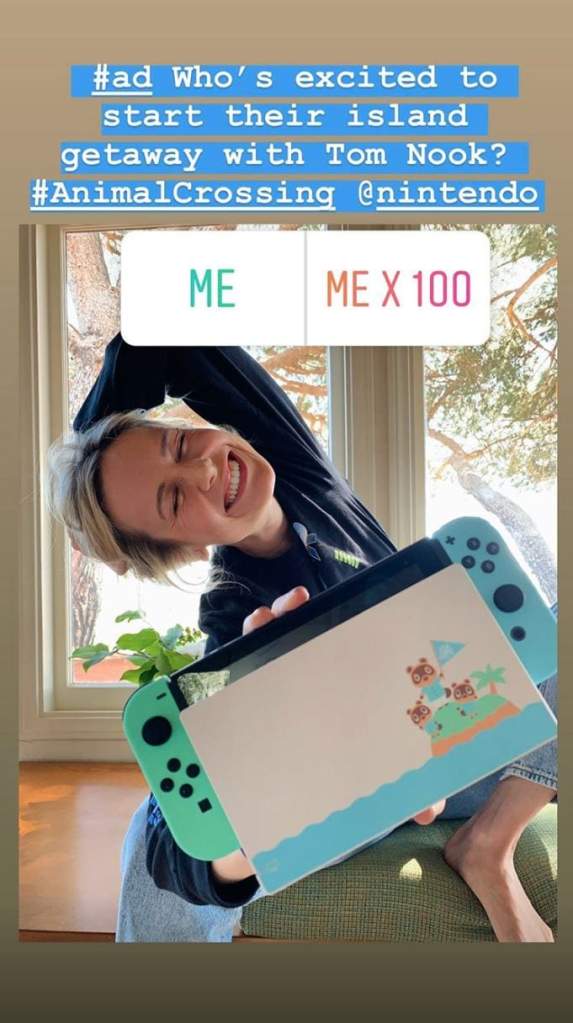 ‌Brie Larson is a big fan of Animal Crossing.

This is far from the first time the Marvel star has showcased her love for this series as back in February, she retweeted a series of images that compare her to characters found in the Animal Crossing franchise.

Amusingly, she was placed side-by-side with Tom Nook wearing his new shirt, which is something she replicated in her March 20 post.

The images quickly went viral, which could be part of the reason she and Nintendo teamed up to promote the new release.

There was a lot of excitement leading up to the release of New Horizons, and it would have no doubt been one of the best selling games of the year with or without Larson’s support.

However, there’s no harm in potentially swaying a few more fans who were not previously interested in the game. It has been nearly a decade since the last traditional entry in the series, so players were certainly craving for something new.

The early returns show that Nintendo has delivered in a big way and Animal Crossing will be keeping fans and Larson busy for a long, long time.