Years after his official debut through an LTM in Fortnite, the Mad Titan Thanos is finally coming to the game as an official Item Shop skin.

In that LTM, players were able to take control of Thanos himself and harness the power of the Infinity Gauntlet. It was one of the first major crossovers we ever seen in Fortnite and it paved the way for everything to come.

He was teased by the Fortnite Twitter account on June 18 before getting his full reveal just an hour later.

The skin is inspired by his look from Avengers: Endgame, which is weird timing because that movie isn’t particularly new anymore. Back in February, there was even speculation he’d be getting a skin since Epic added an animation for an extra large skin.

Anybody who’s at least familiar with the Marvel comics or movies knows how much of a threat Thanos is, so his appearance in the game should be worrisome.

It’s not yet clear if he has anything to do with the story, but we do know he’s coming with a gauntlet filled with Infinity Stones.

Like many of the superhero skins released recently, some players will have the chance to get him completely free of charge through a tournament. It will be a Duos tournament and it’ll work the same way it always has. The tournament is on June 21 and for an exact start time, you’ll want to check your in-game Compete tab.

Compete in the Thanos Cup for a chance to earn the Thanos Outfit and Infinity Gauntlet Back Bling inspired by Marvel Studios' Avengers: Endgame ahead of its release in the Item Shop!

If you aren’t able to the skin for free, you’ll be able to pick it up in the Item Shop on June 26. If you are going to pick him up, it might help to know what you’ll be getting with the bundle.

What’s Included in the Bundle? 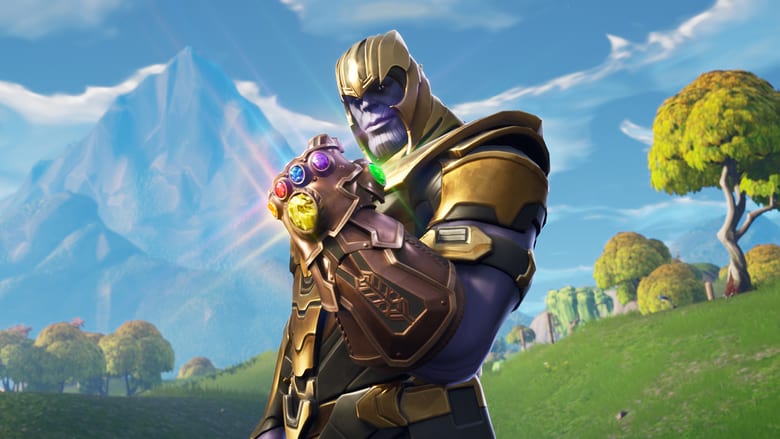 Outside of the skin, you’ll be getting a Back Bling too, so it doesn’t sound like there will be a pickaxe being sold with him.

The Back Bling is the Infinity Gauntlet filled up with every stone, so you’re ready to wipe away half of the population if you’re feeling spicy. Unfortunately, you won’t be able to do that in Fortnite, so you still have to win the old fashioned way.

We see Thanos fight in the Avengers film fight with a blade, so it’s a bit surprising to not see him with a pickaxe in Fortnite. Another option would’ve been to just use the Infinity Gauntlet as a harvesting tool, but Epic just made the decision to omit one entirely.

There is also a spray called “Thanos Watches!” and you’ll be able to get that by playing in the Thanos Cup and earning eight points. Even if you’re a casual player, this should be doable because dropping into a match automatically rewards you with a point.

All you’ll have to do is play in eight of 10 total matches within the allotted 3-hour time slot to get a spray. Now, sprays aren’t necessarily the coolest cosmetics to have, but it’s better to come away with something than nothing at all.

READ NEXT: What Fortnite Chapter 2’s Map Looks Like If Every Change Stayed