San Francisco Bay television station KTVU not only report the wrong names of the San Francisco plane crash pilots, but extremely offensive and racist ones at that, reports The Daily Dot.

KTVU thought they were going to be the first news outlet to identify the pilots flying the Asiana Airlines Flight 214 plane that crash landed at San Francisco International Airport last Saturday, but became the laughing stock of the media world instead. Anchor Tori Campbell read read aloud the following names as the pilots, citing the National Transportation Safety Board and unaware it was a racist joke: Captain Sum Ting Wong (something wrong), Wi Tu Lo (we too low), Ho Lee Fuk (holy f***), and Bang Ding Ow (bang ding ow).

KTVU issued the following statement, claiming that a person from the NTSB confirmed the names of the pilots:

On Friday, July 12, during the KTVU Channel 2 Noon newscast, we misidentified the pilots in the Asiana Airlines crash.

We made several mistakes when we received this information. First, we never read the names out loud, phonetically sounding them out.

Then, during our phone call to the NTSB where the person confirmed the spellings of the names, we never asked that person to give us their position with the agency.

We heard this person verify the information without questioning who they were and then rushed the names on our noon newscast.

The National Transportation Safety Board apologizes for inaccurate and offensive names that were mistakenly confirmed as those of the pilots. A summer intern acted outside the scope of his authority when he erroneously confirmed the names of the flight crew on the aircraft. We work hard to ensure that only appropriate factual information regarding an investigation is released and deeply regret today’s incident. Appropriate actions will be taken to ensure that such a serious error is not repeated.

The NTSB has confirmed that the names of the pilots have not yet been released.

The ironic part of the whole story is that the gaffe comes just days after the station ran an article congratulating itself for “being 100% accurate, effectively using our great sources and social media without putting a single piece of erroneous information on our air” in regards to the same story. 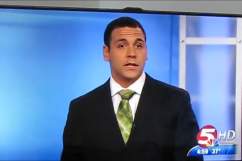