Janay Rice is the wife of disgraced former Baltimore Ravens running back Ray Rice, who was cut Monday just hours after TMZ posted surveillance footage showing Ray Rice clocking his wife in the head inside an Atlantic City elevator in February. The two were engaged at the time, and Janay was known by her maiden name, Janay Palmer.

Both the Ravens and the NFL have been the subjects of massive criticism for waiting until after the video emerged to issue a severe punishment to Rice, who was suspended in May for a mere two games for his role in the incident. 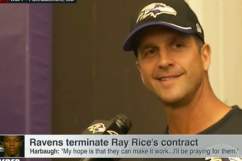 Here’s what you need to know about Janay:

According to multiple published reports, Rice was with a group of people at the Royal Jelly Burlesque Nightclub, which is part of the Revel Casino complex, the night of the altercation. The casino’s director of operations, Scott Russo, told The Baltimore Sun, “When he was here, they were have a great time – no issues. We took care of him like we do any of the celebrities that come in.”

Rice and Palmer transported to Atlantic City police department. Both released on summons to appear in court

Rice’s lawyer, Michael Diamondstein, told the media, “We haven’t seen any charging documents yet. There was an argument that included Ray. I can’t give any specifics because we haven’t seen the document yet. Once we’re able to go through the evidence, it should wind up to little more than a misunderstanding.”

The Ravens also issued a statement at the time:

We are aware of the Friday night situation with Ray Rice and his fiancee. We have spoken with Ray, and know that they returned home together after being detained.

Here’s the original video of Rice dragging Palmer out of the elevator, posted by TMZ in February.

2. Her Graduation Was Gift From Rice Was an Engagement Ring

Janay is a graduate of Towson University in Baltimore, where she majored in communications. Her graduation gift from Rice was an engagement ring and a new car.

“I almost passed out when he told me the car was mine. I’m just happy I decided to be nice that day instead of letting him get his own wallet,” she said at the time. The couple were married in March 2014.

On March 27, Ray Rice was indicted on charges of aggravated assault relating to the incident.

3. They Had Their First Date at the Cheesecake Factory

The couple have one daughter, Rayven, who was born in February 2012. They are also high school sweethearts meeting when they were 16-years old. Rice is originally from New Rochelle, New York and Palmer is from nearby Mount Vernon. The couple had their first date at the Cheesecake Factory where Palmer says, “I was so nervous, I didn’t even eat dinner. I just ate a slice of cheesecake.”

It was love at first sight, Happy Bday to my princess!! pic.twitter.com/Q7UPPnEG30 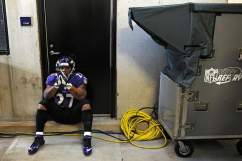 Janay’s sister, Taylor, played basketball at West Virginia University, where she led the Mountaineers to four straight NCAA tournament appearances and was named Big 12 Sixth Man of the Year as a senior in 2013-14.

5. After Being Punched in the Face, She Was Charged With Assault

Janay was initially charged with simple assault after the altercation, though the video posted by TMZ shows her lightly hitting Ray before Ray clobbers her.

Despite Janay’s status as the victim in the assault, the Ravens orchestrated a press conference at which both Ray and Janay apologized for their roles in the incident. (Watch the video from the press conference above.)

The Ravens even tweeted from their official Twitter account that Janay “deeply regrets” her role in the incident — a tweet that many have said put on display the organization’s stunning lack of sensitivity about domestic violence.

Janay was accused in 2010 of stealing a $1,000 dress from a mall in Baltimore. She was found guilty and given probation on top of a $400 fine. She said at the time:

I immediately started bawling. I didn’t want people to think I was a thief. I thank them because I’ve learned to grow thicker skin.

I’m just happy that Ray and I have a good foundation. We’ve been through a lot, and we trust each other, so as long as were on the same page, the media has little relevance in our life. 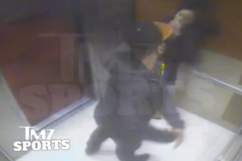 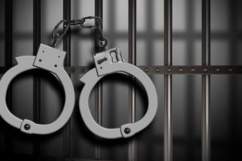 Loading more stories
wpDiscuz
64
0
Would love your thoughts, please comment.x
()
x
| Reply
. The Baltimore Ravens running back was arrested, along with Palmer, in Atlantic City on an assault charge.