Wow, this has to go down as one of the biggest social media fails of all time. The US Airways official Twitter account, in responding to an angry customer’s barrage of complaints, sent her a tweet thanking her for her feedback attached to the above explicit pic.

If you want to see the original version (WARNING: GRAPHIC SEXUAL CONTENT), you can find it here.

We apologize for an inappropriate image recently shared as a link in one of our responses. We’ve removed the tweet and are investigating.

The company has deleted the tweet and is “investigating.” The irate customer, @ElleRafter, didn’t seem to accept the apology.

@USAirways yeah, you seem so very sorry. So sorry, in fact, that you couldn't be bothered to address my other tweets.

The customer spent most of yesterday tweeting her anger about the airlines’ service:

@USAirways Unhappy that 1787 sat for an hour on tarmac in CLT because overweight, resulting in over hour late arrival in PDX…

@USAirways …and there were no ground personnel outside security in PDX to talk to! Plane was OLD and falling apart. Poor service!

@USAirways Is this the sort of service that I should expect now that you merged with AA and are part of #OneWorld? If so, no thanks!! 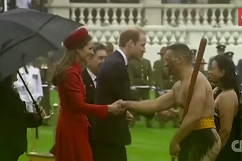