Daniel Pantaleo, an eight-year-veteran of the New York Police Department, is under investigation after a witness’ cell phone video shows him putting Eric Garner in a chokehold during an incident in Staten Island.

Garner, a Brooklyn resident and father of six, died after his attempted arrest for allegedly selling loose cigarettes on the street.

The death of the 400-pound asthmatic man has been ruled a homicide. The incident has sparked a massive backlash against NYPD brutality.

Here is what you need to know about Daniel Pantaleo:

1. He’s Been Sued for Strip Searching and Groping 2 Men

On March 22, 2012, two African-American men, 45-year-old Darren Collins and 42-year-old Tommy Rice, were driving in a car at 10 a.m. when they were pulled over by Pantaleo on Jersey Street on Staten Island. Although it was later proven there was no reason to do so, both men were asked to vacate their car and were handcuffed.

Then, according to the complaint you can read above, Pantaleo preformed a “humiliating and unlawful strip search in public view,” where he forced the two men to “pull their pants and underwear down, squat and cough.” The two men were then taken to the police station, where they underwent a second strip search where their genitals were “lifted.”

Pantaleo was also sued over a separate incident from 2012. On February 16, Pantaleo is accused of arresting Rylawn Walker without cause and keeping him locked up for 24 hours. Walker claims Pantaleo manufactured misconduct in order to justify the arrest. You can read the complaint above.

The case has yet to be settled.

3. Eric Garner’s Death Was Ruled Homicide by the Medical Examiner

On August 1, the Office of the Medical Examiner determined that the chokehold caused Garner’s death, specifically the compression of the throat and “the compression of his chest and prone positioning during physical restraint by the police.”

The death was ruled a homicide. It is unclear at this point what, if any, judicial actions will follow. 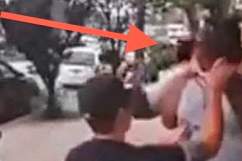 look at the NYPD Cop #DanielPantaleo who murdered #EricGarner with a #Chokehold — desk duty is not enough. FIRE HIM. pic.twitter.com/DPORVCZEfK

According to reports, Pantaleo’s badge and gun were taken away, but he was not suspended, fired or arrested. He is serving in a desk job.

According to the Global Grind, the president of the Patrolmen’s Benevolent Association called his transfer a “completely unwarranted, knee-jerk reaction.”

5. Chokeholds Are Forbidden by the NYPD

The NYPD Patrol Guide states that excessive violence, and specifically chokeholds, will “not be tolerated.”

It reads, “Members of the New York City Police Department will not use chokeholds. A chokehold shall be included, but is not limited to, any pressure to the throat or windpipe, which may prevent or hinder breathing or reduce intake of air.”

Loading more stories
wpDiscuz
56
0
Would love your thoughts, please comment.x
()
x
| Reply
Daniel Pantaleo is the NYPD officer who put Eric Garner in the chokehold that killed him. He's previously been sued twice.