A 29-year-old man accused of accidentally shooting a woman while drunk at a Washington movie theater during a showing of 13 Hours told police he brought his handgun to the Michael Bay Benghazi thriller because he was afraid of a mass shooting.

Dane Gallion has been charged with third-degree assault after the Thursday shooting in Renton, KOMO-TV reports. He appeared in court for the first time this weekend. The victim, 40-year-old Michelle Mallari, was shot in the back and is expected to survive, police say.

Gallion, a Puyallup native who played soccer at Vanguard University in California, has a legal concealed carry permit, police said. According to court documents, Gallion told police he had taken a Xanax for anxiety Thursday morning and drank a 22-ounce beer before the movie.

“He told some people he’d taken the gun out because he was concerned about the possibility of mass shootings there,” said Renton Detective Robert Onishi told reporters. “From having talked to him, it seems he didn’t have any intent to shoot anybody.”

His attorney, David Allen, told the Seattle Times his client had “no intent” to shoot anyone and called the incident a “terrible accident.”

1. Gallion Told Police He Accidentally Fired His Gun After a Moviegoer Reached for His Crotch

The bullet hole left in a theater seat after the shooting. (Renton Police)

Police responded to the Regal Cinema 14 at The Landing at about 8 p.m. Thursday.

“Preliminary accounts indicate that an intoxicated suspect entered one of the theaters and was fumbling with a handgun he had in his possession when it went off, striking another patron seated in front of him,” according to a statement from Renton Police.

Gallion gave police “inconsistent” stories about what happened before he fired his gun, the Seattle Times reports.

When he was arrested he told the officer another moviegoer reached for his crotch and he then accidentally fired his gun, according to court documents. He said he then ran out of the theater because he was afraid others would suspect he was a mass shooter.

When interviewed at the police station, he told officers a man was bothering him, but didn’t provide other details, the newspaper reports. He said the gun went off accidentally and scared him, so he left. He denied handling the gun and police said in their report they didn’t see any powder burns or injuries on him, according to the Times.

Police said they found a bullet hole in the seat where the victim, Michelle Mallari, was sitting, and a 9-mm magazine in a theater trash can.

Witnesses said Gallion stood up and was fumbling with a handgun in his waistband before the shot was heard, KIRO-TV reports.

According to KOMO-TV, Mallari was talking to her husband or significant other before she was shot.

“I believe the lady in front of us that got shot was actually talking to her husband or significant other and that’s when we heard the loud pop,” one witness, who did not want to be identified, told KOMO-TV. 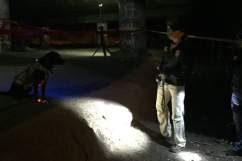 2. Gallion’s Father Called Police to Turn in His Son

Witnesses said Gallion fled from the theater and went to a nearby restaurant, KIRO-TV reports.

Fred Granados told the news station he was “sitting in the restaurant, guy stumbles in, drops a gun on the floor, looks like a .45 semiautomatic pistol. He starts walking to the bathroom and I get up to tell the management, ‘Hey, some guy just dropped a gun. A real gun.”

Renton Theater Shooting Suspect called 911 and turned himself in from a home in Newcastle. @KIRO7Seattle pic.twitter.com/jH47Hv1nZS

At about 9:40 p.m., Gallion’s father called 911 to report his distraught son had told him he had dropped his gun at a theater and he thought it discharged, according to KIRO.

Police then responded to arrest Gallion at a home in Newcastle.

3. The Victim Is in Stable Condition After Spending Several Days in the Hospital

The victim, Michelle Mallari, is still recovering at the hospital, but is in stable condition and is expected to survive, officials said. But her family said she was in serious condition Friday.

“Our family and friends are grateful for the outpouring of support and concern for Michelle. Our main priority right now is to focus on Michelle’s health and well being. At this time we have no comment about the shooting. We are confident that the investigation is in good hands with the Renton Police Department. We ask that you respect our privacy during this time as we navigate Michelle’s recovery,” her family said in a statement to KIRO-TV.

Nathaniel Hansen, a military veteran, told Q13 Fox he rushed to help Mallari. The bullet went through her shoulder, he said.

“She was crying a little bit and saying, it hurts. My shoulder hurts,” Hansen said. “She said she had no idea who the shooter was.”

Hansen told the news station about Gallion, He obviously had his firearm visual to me. It was in his hand as he was leaving.”

Police are keeping an eye on crowds at this Renton movie theater, after a shooting last night. #Q13FOX pic.twitter.com/2O0g1gcLN6

Gallion was previously convicted of driving under the influence in 2011. He is a married father of two and is a graduate student at the University of Washington, the Seattle Times reports.

Gallion works as an office manager at The Pain Center of Western Washington, according to his Linkedin profile.

Gallion was released after posting $25,000 bail on Saturday. His attorney asked for $10,000 bail, telling the judge Gallion has “very strong ties to the community,” and is the son of a retired Air Force colonel, the Seattle Times reports.

The judge, who said he was “concerned” because Gallion fled from the theater, ordered that he surrender any firearms he owns. He was also ordered not allowed use alcohol or other controlled substances because of his previous DUI convition, the newspaper reports. He is due back in court on Tuesday. 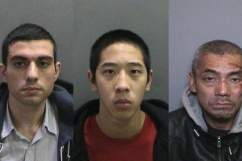 Loading more stories
wpDiscuz
11
0
Would love your thoughts, please comment.x
()
x
| Reply
A man accused of shooting a woman during a showing of 13 Hours told police he brought his gun to the theater because he feared a mass shooting