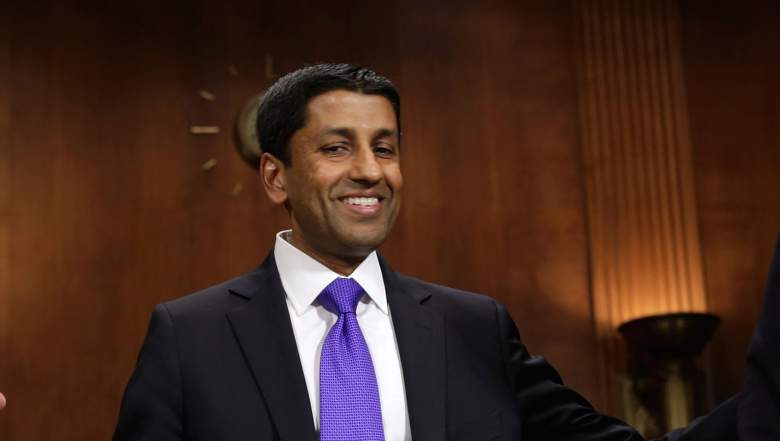 Sri Srinivasan during his confirmation for the US Circuit Court. Getty)

Sri Srinivasan is an American lawyer and judge currently serving as US Court of Appeals Judge for the District of Columbia Circuit. Srinivasan is speculated to be Obama’s nominee for the Supreme Court Justice seat vacated by Antonin Scalia’s death. Srinivasan would be the first Indian-American nominated for the post.

Srinivasan is the son of Indian immigrants who was born in India but grew up in California and Kansas before attending Stanford for undergraduate, law and business school. He then embarked on a private law practice, which included defending Enron executive Jeffery Skilling, before serving as US Deputy Solicitor General and then in his current post. Srinivasan and his wife, attorney Carla Garrett, have a twin boy and girl.

1. He Could Make History as the First Foreign-Born and First Indian-American Supreme Court Justice

Srinivasan was born Padmanabhan Srikanth Srinivasan in the Indian city of Chandigarh. His father moved the family to America on receiving a prestigious Fulbright Scholarship to attend Cal-Berkeley. After a brief return to India, the family settled in Lawrence, Kansas. Srinivasan went on to get undergraduate and joint JD/MBA degrees from Stanford.

The New York Times described Chandigarh, the Srinivasans’ native home, as “praying for a ‘son’ on the Supreme Court”. A local man told the Times:

Here, at the southern tip of India, from the village of Mela Thiruvenkatanathapuram, a very great man was born. This man is coming to the highest position in the greatest court. We the people of the village, the people of India, think it is a great honor.

2. His Moderate Reputation May Help Him with a Contentious Supreme Court Nomination 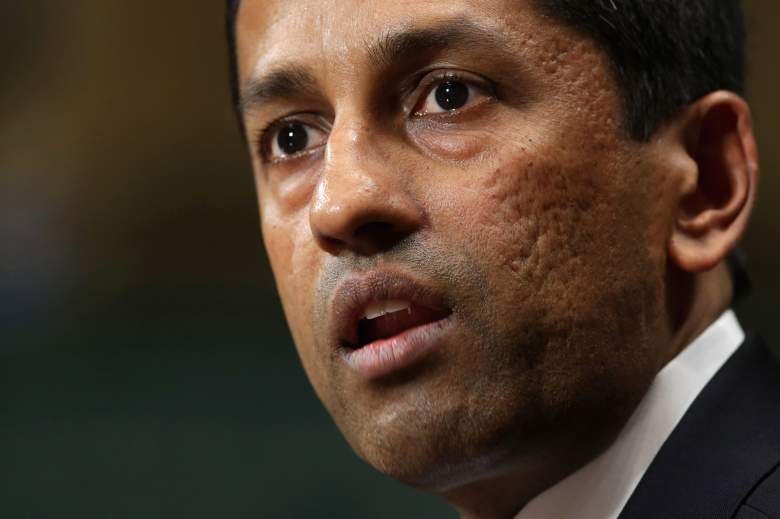 Srinivasan during his Court of Appeals confirmation hearing, which confirmed him 97-0. (Getty)

Republicans have already vowed to block any Supreme Court nominee from Obama, but the hope should he be nominated is that the popular judge with a moderate reputation would pass through the Senate more easily. It’s worked before, as Srinivasan was confirmed a federal judge by a 97-0 vote. During that confirmation hearing, current 2016 Republican candidate Ted Cruz referred to Srinivasan as a “good friend.”

For his own part, Srinivasan rejects both conservative and liberal descriptions. He clerked for moderate Republican federal judge J. Harvie Wilkinson and centrist Justice Sandra Day O’Connor. Supreme Court practitioner and SCOTUSblog reporter Tom Goldstein analyzed his federal rulings and concluded he would be “as moderate a judge as Republicans could expect a Democratic president to nominate.” In his own words: Srinivasan told the Senate Judiciary Committee during his Appeals Court confirmation hearing that he had no “overarching, grand unified judicial philosophy that I would bring with me to the bench.” 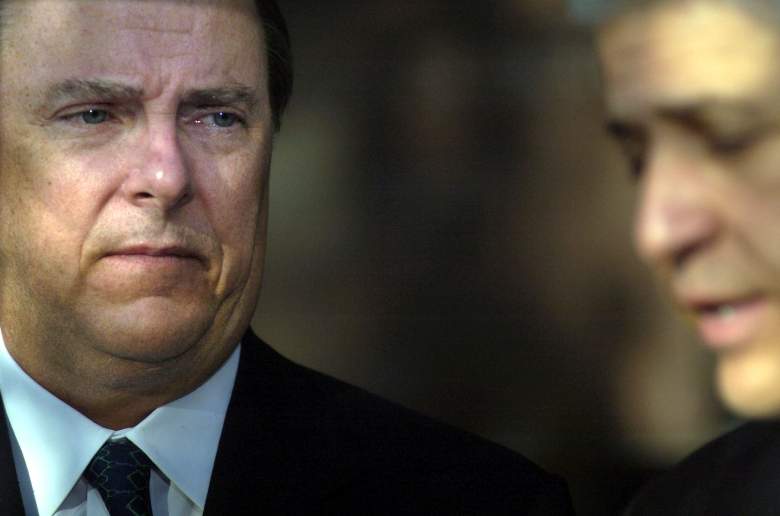 Jeffrey Skilling, here during his sentencing, was represented in appeals court by Srinivasan. (Getty)

In 2010, while in private practice with international law firm O’Melveny & Myers, the “unstoppable” Srinivasan took the case of Jeffrey Skilling, an energy executive convicted of fraud in the Enron scandal. Srinivasan challenged Texas’s “honest services fraud” law, successfully arguing before the US Supreme Court that the law was unconstitutionally vague. While the Court, however, did not overturn his conviction, the decision led to a resentencing deal for Skilling, who originally received what was effectively a life sentence.

It’s not Srinivasan’s only brush with controversy. He also represented oil company Exxon and a mining conglomerate in lawsuits springing from alleged human rights abuses in Asia. The mining company lawsuit has since been dismissed, while the Exxon case is ongoing. Srinivasan also represented the federal government in helping to overturn state same-sex marriage bans.

4. His Wife & Mother of His Twin Boy & Girl Has Her Own Successful Law Career 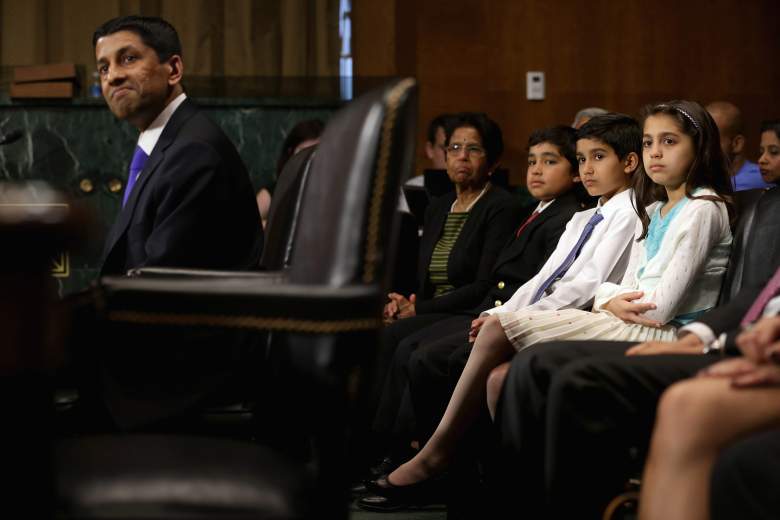 While at Stanford, Srinivasan met Carla Garrett, and the two now live in Arlington, Virginia. In 2002, Garrett gave birth to a twin boy and girl, who the family named Vikram and Maya. Srinivasan kept his childrens’ baby socks in his pockets as good luck charms when arguing before the Supreme Court, and his children helped put on his robe for his federal swearing-in.

Carla Garrett runs a successful legal practice of her own. Carla Garrett, PLC represents corporations, small businesses, and individuals in business matters. She is also a partner in the Potomac Law Group, serving in corporate practice, and represented a low-income housing group pro bono. In community work, she organized a “day of service” for DC area Stanford alumni and served as PTA president at the twins’ elementary school. 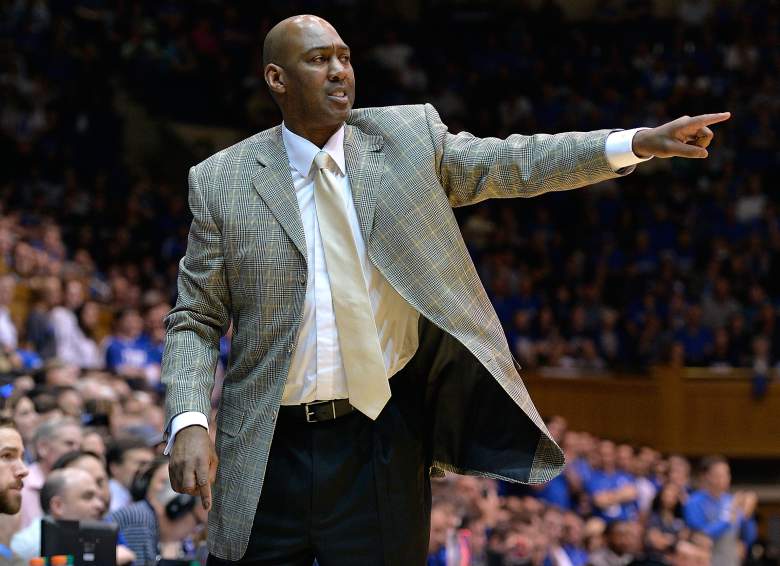 While attending Lawrence High School in Lawrence, Kansas, Srinivasan played on the basketball team with future NBA star Danny Manning. Manning described his former teammate to the Washington Post as “an all-around threat: good dribbler, nice jump shot and pretty quick. He was very dedicated to working on his game to continue to get better.” Lawrence High won the 1983 Kansas 6A high school basketball championship.

Srinivasan continues to be an avid fan of the sport. Despite his experience with the game, however, Appeals Court Chief Judge Merrick Garland (also a potential Obama nominee) said of Srinivasan that the only disappointment in his first year as a judge had been that the Appeals Court had “lost convincingly” in an annual game against Supreme Court personnel. 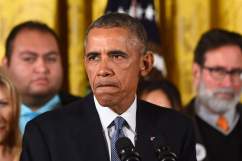