:: Next@10 on @tmj4: MPD headed to Ohio for DNA test of woman in Alexis Patterson case https://t.co/wfFRO5lkJF pic.twitter.com/jFAHluwnTC

Police gave an Ohio woman a DNA test to see if she is Alexis Patterson, who was 7-years-old when she disappeared while walking to her Milwaukee, Wisconsin elementary school 14 years ago, WTMJ-TV reports.

However, a Milwaukee television station reported July 14 that the DNA test showed the woman was not Alexis:

Alexis, a first grader, disappeared while walking to Hi-Mount Boulevard Community School, said WITI-TV in Milwaukee. “She has not been heard from or seen since,” WITI said.

For years, Wisconsin law enforcement officers have kept the search for Patterson alive, even as previous leads have evaporated. The Milwaukee County Sheriff’s Department held a ceremony for Alexis on the 14th anniversary of her May 3, 2002 disappearance. The Milwaukee Journal Sentinel called the case “one of the biggest missing-person cases in the history of the Milwaukee Police Department.”

Alexis vanished the month before Elizabeth Smart was found alive, ABC News said. There have been cases of missing children found years after they vanished; Jaycee Dugard was abducted and spent 18 years with her kidnapper before being reunited with her family. Three missing girls – Amanda Berry, Michelle Knight, and Georgina DeJesus – were found in Cleveland where Ariel Castro had kept them hostage for a decade. He later committed suicide.

1. Police Received a Tip From an Ohio Man Who Thinks He Knows Alexis but The Woman Denies She is Alexis & DNA Now Shows She’s Not

A Milwaukee Police Department spokesman tells WTMJ-TV that they received a tip from an Ohio man, who “believes a woman he knows could be the 7-year-old girl who vanished from Milwaukee’s west side.” To find out, detectives will give the woman a DNA test, reported WTMJ-TV.

Concurs WITI-TV: “Police have apparently received a tip from someone in Ohio claiming a woman he knows may be Patterson.” Police said they will perform DNA testing “to determine if this person is Alexis Patterson.”

The Milwaukee Journal Sentinel says the tip arose when the Ohio woman’s ex-husband and his fiance grew suspicious because “The woman, they say, has no memory of her childhood before the age of 10. She has no photographs or school mementos” and only remembers being brought to California, although she also claimed she was born in Central America, the newspaper said.

The pair scoured the Internet, and found an age-progressed picture of Alexis and thought it was the woman, The Journal Sentinel said, adding that the couple sent photos of the women to the news media and Milwaukee law enforcement. The newspaper said the woman in Ohio has three features Alexis had, including a “linear scar beneath her right eye and an unusual bump on her left pinkie finger” but claims to be 28 and has two children.

However, the Ohio woman said she is not Alexis, and expressed agitation and anger at the story, said WTMJ-TV.

WISN-TV in Milwaukee reported July 14 that the woman was not Alexis Patterson.

When she disappeared, Alexis was 3 feet, 8 inches tall and weighed 42 pounds — with brown eyes and brown hair, said WITI. Alexis was last seen wearing “a red hooded jacket with grey stripes, a purple shirt, blue jeans and white Nike tennis shoes. She has a scar under her right eye and a bump on her left pinky finger,” the news station said. However, that was more than a decade ago, so today she would be a young woman of 21.

Alexis had no history of running away and had perfect attendance at school when she vanished, says The Charley Project. She was a first grader when she disappeared.

2. Alexis’ Mother, Ayanna Patterson, Grew So Emotional at a Recent Ceremony for Alexis That Paramedics Came to the Scene

The mother of missing girl Alexis Patterson feeling faint after ceremony to remember her daughter. EMTs on the way. pic.twitter.com/gqKBVK9BPg

Over the years, officials have held events to ensure Alexis is not forgotten. At a May 2, 2016 ceremony in Milwaukee remembering Alexis, Ayanna Patterson, Alexis’ mother, grew so emotional that she had to be taken to the hospital, but she pledged to never stop looking for her little girl, WITI-TV said. As she talked about Alexis, Patterson grew out of breath.

Alexis’ aunt told WISN-TV that the family is “cautiously optimistic about this new lead but they’ve been down this road before. They are encouraged that investigators are taking action and going to Ohio to feel it out.” The Journal Sentinel wrote that the newspaper had shown the photos of the Ohio woman to Ayana Patterson and she said it could be Alexis, telling the newspaper: “My heart is telling me this is my child.” The Journal Sentinel said the DNA test may have already been taken, but the results aren’t in.

Many Wisconsinites have closely followed the case for more than a decade, as the community banded together in hopes that, someday, Alexis would be found.

I pray to God the MKE detectives find Alexis Patterson & bring her home. It's been 14 years ?

I hope to God they did find Alexis Patterson. This would be the most inspiring news in years.

Did they really find Alexis Patterson???

“If it’s 20 years, if it’s 30 years, something is going to come up,” said Patterson. In 2012, The Milwaukee Journal Sentinel reported that Ayanna had a sweet 16 birthday party for Alexis and recalled how the little girl loved to go skating.

3. Alexis’ Stepfather Was Connected to the Murder of a Police Officer & Her Father Was Charged With Beating a Baby

The Milwaukee Journal Sentinel reported that Alexis’ biological father, Kenya Carlton Campbell, then 30, was charged with felony child abuse and one count of child neglect for “beating his 8-month-old daughter.” The girl suffered serious injuries, including head trauma, a lacerated liver, and a broken jaw, the newspaper said. He received a lengthy prison term he is appealing, according to Wisconsin’s Circuit Court database.

At the time she disappeared, Alexis was living with her stepfather, LaRon Bourgeois, and mother – who have since divorced, said the Journal Sentinel.

Bourgeois said he walked her across the street, which was less than a block away from their home, and dropped her off at the corner of her school, ABC News said. “Alexis apparently never made it to class,” said ABC News. “Teachers at Hi-Mount Community School in Milwaukee said they never saw her or her stepfather near or on school grounds that day.”

ABC News said students told police they did see Alexis (possibly crying) on the playground both before and after school, but that she wasn’t in class. They also reported seeing a mysterious truck idling by the school that week, but it’s never been identified, said The Charley Project. When she didn’t come home from school that day, her parents reported her missing.

Police were criticized by some for initially focusing on Alexis’ mother and stepfather after it emerged that Bourgeois had a drug record and was given immunity for his involvement as the getaway driver in a 1994 bank robbery that led to the death of Glendale, Wisconsin Police Officer Ronald Hedbany, The Milwaukee Journal Sentinel said.

In 2003, Bourgeois was charged with threatening to kill and beat Alexis’ mother, who accused him of not doing enough to comfort her in the wake of the child’s disappearance, The Journal Sentinel said.

Police never connected any of Alexis’ parental figures to her disappearance.

“LaRon Bourgeois has also had to deal with reports he failed a polygraph test,” ABC News said.

4. Police Have Chased Leads to Other States Before

#GrowingUpInMilwaukee everybody knows who Alexis Patterson was.

The Milwaukee Journal Sentinel reported that the scene initially involved massive searches with a command post.

In 2005, Police traveled to Baton Rouge, Louisiana to search a house there for signs of Alexis after receiving a tip from a prisoner, but the search led nowhere, The Charley Project says.

Three years before, a Milwaukee television station received an anonymous tip to look for Alexis in the Milwaukee River, but police found nothing that time, either, according to The Charley Project. 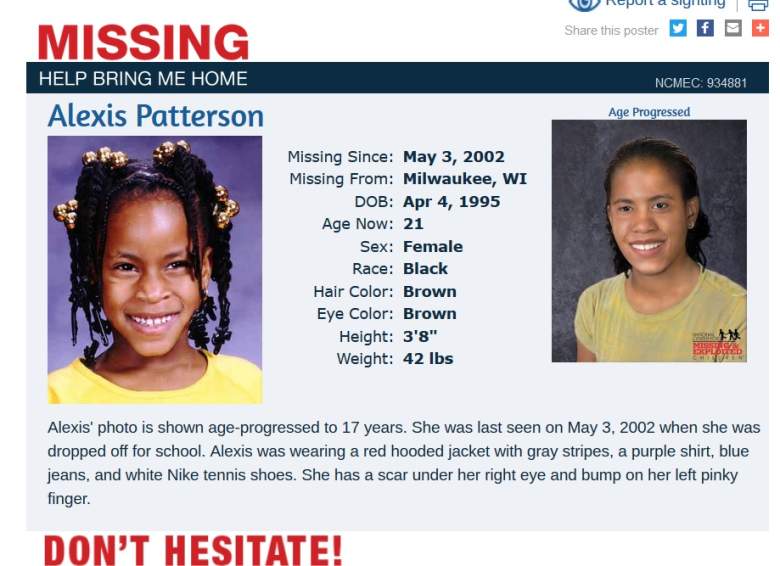 The missing poster in Alexis’ case. National Center for Missing and Exploited Children.

An age-progressed photo of Alexis is in the database of missing children put out by the National Center for Missing and Exploited Children. People who have information can call the Milwaukee County Sheriff’s Office at (414) 278-4788. The photo above progresses her age to 17. Alexis would be 21-years-old today.

Loading more stories
wpDiscuz
7
0
Would love your thoughts, please comment.x
()
x
| Reply
Police are giving an Ohio woman a DNA test to see if she is missing Milwaukee child Alexis Patterson, who vanished 14 years ago at age 7 on her way to school.