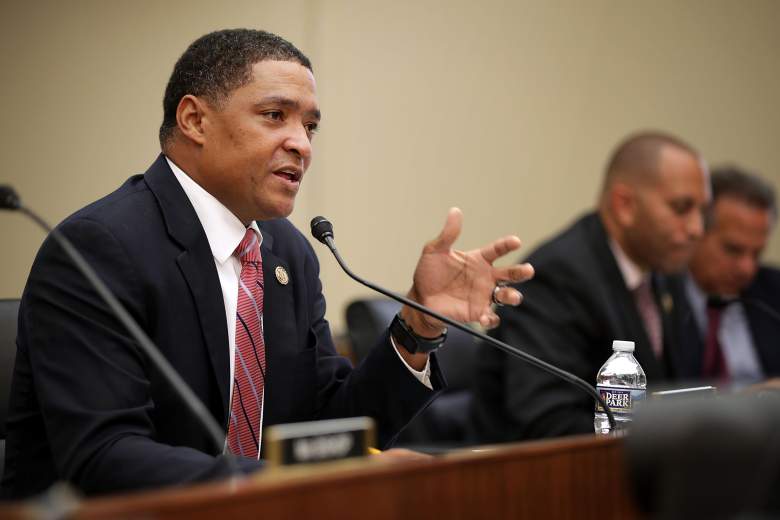 Congressman Cedric Richmond is under fire this week after making a sexist joke about White House Counselor Kellyanne Conway.

Richmond is a Democrat who has represented Louisiana’s 2nd congressional district since 2011. He also serves as the chairman of the Congressional Black Caucus. He is from New Orleans and has been married to his wife, Raquel Greenup, since 2015.

Here’s what you need to know about Congressman Cedric Richmond and the controversy surrounding his Kellyanne Conway joke.

1. In Reference to a Photo of Kellyanne Conway Kneeling, Richmond Said That She Looked ‘Kind of Familiar’ in That Position

During the Washington Press Club’s annual congressional dinner on Wednesday evening, Cedric Richmond made reference to a recent photo of Kellyanne Conway in the Oval Office kneeling on the couch. She was mocked on social media for sitting in this position, which she was doing because she was taking a photo and was trying to get a good angle.

Richmond’s speech was preceded by Senator Tim Scott, who also referenced the Conway photo and made a joke about Bill Clinton’s sex scandal.

“Has anyone seen the controversy around Kellyanne Conway and the couch in the Oval Office?” Scott said, according to The Washington Post. “Come on people. You remember the ‘90s. That couch has had a whole lot of worse things.”

“You even mentioned Kellyanne and the picture on the sofa,” Richmond said, directing his comments towards Tim Scott. “But I really just want to know what was going on there because, you know, I won’t tell anybody. And you can just explain to me that circumstance, because she really looked kind of familiar there in that position there. But don’t answer. And I don’t want you to refer back to the ‘90s.”

The joke did not go over well in the room, and not a single laugh could be heard on the CSPAN broadcast of the event.

2. He Says the Joke Was Not Meant to be Lewd 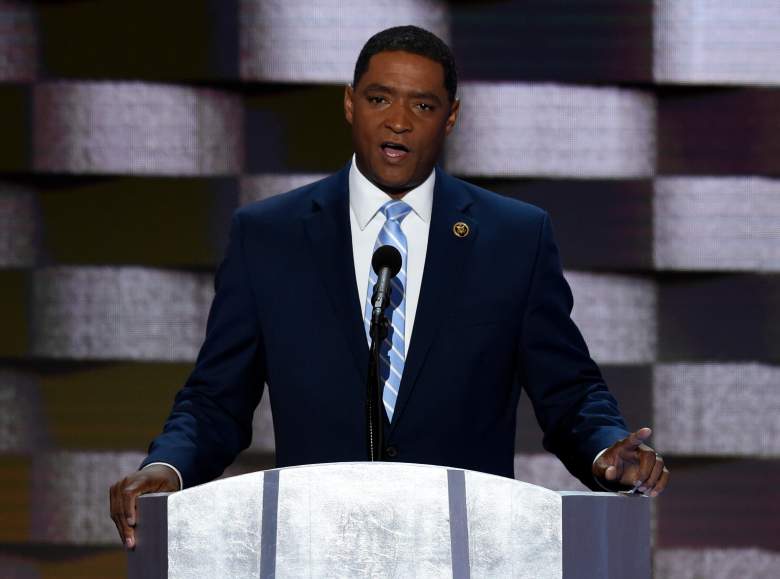 Cedric Richmond addresses delegates on the fourth and final day of the Democratic National Convention at Wells Fargo Center on July 28, 2016 in Philadelphia. (Getty)

Immediately after Richmond finished his remarks, an Independent Journal-Review reporter asked him if the joke was meant to be a sexual reference.

Richmond denied this was the intent of the joke, though he went on to contradict himself by suggesting that the joke was about the Bill Clinton sex scandal and would therefore have been intended to be lewd.

“Hey man, I just said she looked comfortable in that position,” Richmond told the Independent Journal-Review. “I can’t let Tim get away with making a Clinton joke without making one of my own.”

In a statement to The Washington post on Thursday morning, Richmond doubled down on his claim that he was not trying to make a sexual reference at all and that people were misinterpreting his words.

“Since some people have interpreted my joke to mean something that it didn’t I think it is important to clarify what I meant,” Richmond said. “Last night was night of levity. Where I grew up saying that someone is looking or acting ‘familiar’ simply means that they are behaving too comfortably.”

Richmond went on to say, “I decided to use that joke due to the large social media backlash over her inappropriate posture considering there were more than 60 HBCU Presidents in the room.”

3. He Once Had His Law License Suspended After Falsifying a Sworn Statement 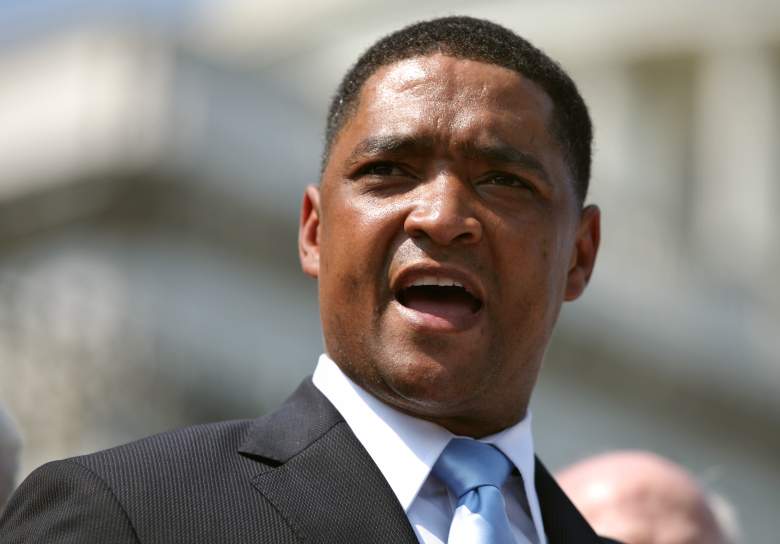 Cedric Richmond addresses a rally with fellow House Democrats on the steps of the U.S. Capitol September 14, 2011 in Washington, DC. (Getty)

In 2008, Cedric Richmond had his law license suspended for two months.

The Louisiana Supreme Court decided in a 5-2 decision in December 2008 that Richmond would have his license suspended because he had sworn falsely that he lived in District D for more than two years when he ran for a seat on the New Orleans City Council.

“I do not find that the respondent [Richmond] knowingly lied about his domicile, but, rather made statements which were later found to be legally incorrect,” Johnson wrote.

4. He Was the First Democrat to Have Barack Obama Endorse Him in a TV Ad

“Cedric Richmond will make an outstanding representative for this district, and I am proud to support him in this election because he shares our values and supports our agenda,” Obama said in a statement at the time. “I look forward to working with Cedric in the next Congress because he believes in our shared agenda of increasing access to quality, affordable health care and investing in job creation.”

This endorsement wasn’t on its own surprising, but it was noteworthy that Barack Obama for the first time appeared in a TV ad for a Democratic candidate.

“The city of New Orleans has had its trials. But you’ve also had great champions, fighting to see you through the tough times,” Obama said in the ad. “Cedric Richmond is one of those champions.”

5. He Supported the Display of a Painting Depicting Police as Pigs 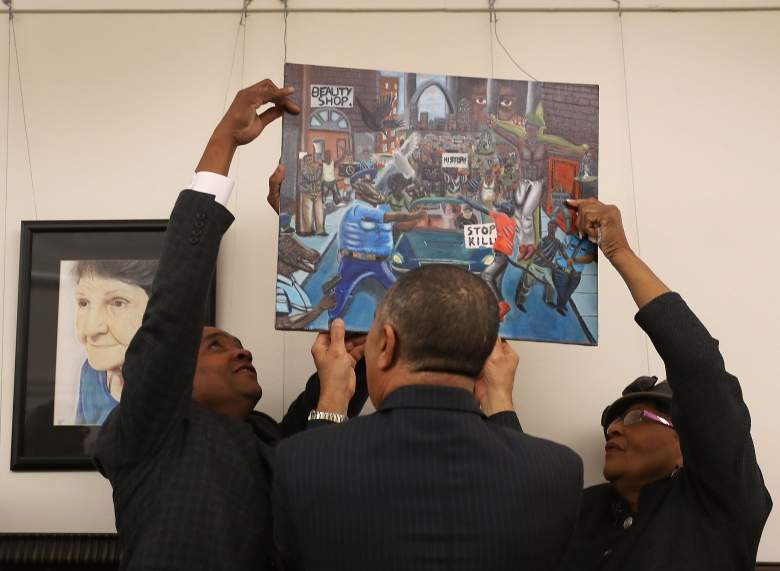 Cedric Richmond, William Lacy Clay, and Alma Adams rehang a painting on the U.S. Capitol walls after it was removed by Duncan Hunter January 10, 2017 in Washington, DC. (Getty)

Just a few weeks ago, Cedric Richmond was embroiled in another controversy, this one having to do with a painting that was hung on Capitol Hill depicting police officers as pigs. Republicans wanted to take the painting down, while Democrats said that doing so would go against principles of free expression.

Richmond supported keeping the painting up, telling Politico that if someone tries to take it down, “We may just have to kick somebody’s ass and stop them.”

He went on to say that taking down the painting would be opening up Pandora’s Box.

“I’m looking at some paintings that people could probably find some offense to,” he said. “So you just open up Pandora’s Box to, I think, anarchy when it comes to the art around this building.”