A Huntington Beach, California man and his young family were kicked off a Delta flight after refusing to give up a seat they paid for when the plane was overbooked.

Brian Schear, who was traveling with his wife, Brittany Schear, and two small children ages 2 and 1, voluntarily left the plane after being told the family was being kicked off the flight. Now a video of the incident is going viral. You can watch the video below. In it, Schear repeatedly tells the airline employees that he had paid for the seat and wanted his 2-year-old to use it in a car seat for safety reasons.

However, the entire family then had to leave the plane after being unceremoniously told to get off, stranding them far from home.

It’s the latest example of airline passenger mistreatment to hit the Internet after Doctor David Dao caused a firestorm when he was dragged off a United flight.

1. Brittany Says the Airline Kicked the Family Off the Flight With ‘2 Babies’ in the ‘Middle of the Night’

Brittany Schear has written about the family’s experience on Facebook. The California woman describes a nightmare in which the parents, with two small children, ages 1 and 2, had to suddenly leave the plane with no hotel or car lined up.

It was midnight when the family was kicked off the plane, and “the couple and their two toddlers were left having to scramble for a hotel room and pay $2,000 for another flight the next day, on United,” reports ABC 7.

“This is what delta did to us last week. Airlines don’t give a crap about their customers,” she wrote.

Mid night kicked us off the flight with 2 babies because we wouldn’t let them take our sons seat away because they over booked the flight. They wanted us to remove our 1 year old so they could give the seat to someone else. Even though we paid for that seat. We did not receive a refund and had to purchase all new tickets the next day. It was the middle of the night, we had no hotel to go to or a car. Our 2 year old was already asleep on the plane and our 1 year old just wide eyed watching everyone talk.

Brittany shared the above video of the incident to her Facebook page. The incident occurred on flight 2222 from Maui to LAX on April 23, but it didn’t hit the Web in earnest until early May. 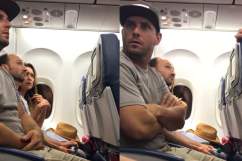 2. Brian Schear Asked ‘When Will This All Stop?’ & the Family Was Returning from Maui to California

Brian Schear first posted the cell phone video on YouTube after the family’s airline incident. He then posted the video on Twitter and tagged multiple national news outlets with the headline, “Family With Infant Children Booted Off Delta Flight.”

Here’s what happened in a nutshell: The Schears decided they wanted to use a seat they originally bought for their older son (who is 18) for their 2-year-old because it wasn’t safe to hold a child on a lap for the entire flight. So, they sent the older child home on another flight, and then used the seat they’d purchased for the toddler.

That’s where the airline cried foul. The plane was overbooked, and, since, the original named passenger, the older child, wasn’t in the seat, Delta wanted to use it for someone else. Schear’s point was that he’d paid for the seat all the same. After all, both passengers were his young children. After several minutes of haggling back and forth, he and his family were told to just get off or the plane would not leave, with an airline worker informing them they were “on their own.”

Schear wrote on social media that the video was “of Delta airlines booting myself, my wife and my 2 children ages 1 and 2 off delta flight 2222 April 23 from Maui to LAX. They oversold the flight and asked us to give up a seat we purchased for my older son that my younger son was sitting in.”

Brian Schear accuses the airline of lying to him.

“You will hear them lie to me numerous times to get my son out of the seat. The end result was we were all kicked off the flight. They then filled our 4 seats with 4 customers that had tickets but no seats. They oversold the flight. When will this all stop? It was midnight in Maui and we had to get a hotel and purchase new tickets the following day.”

The problem from the airline’s standpoint is that the original ticketed passenger was no longer using the seat, and the plane was overbooked, although the airline denies the latter was the reason the family was kicked off the plane. Most airlines have policies against name changes on tickets.

“I bought this seat.”

According to Los Alamitos Patch, Brian Schear, “his wife and their two infants were booted off a Delta flight from Maui to LAX, claiming the airline demanded the seats he’d purchased for his children.”

He was told the flight switch was against “federal policy.”

A flight supervisor said the child couldn’t be in the airplane seat in a car seat. Eventually, the airline workers tell Schear that he and his family have to leave the flight. “So, we’re getting kicked off this plane no matter what now?” Brian Schear asks, incredulous. “…What are we supposed to do, sleep in the airport?”

“You guys are unbelievable,” Schear responds, giving the airline employees a thumb’s up. “Great customer service.”

3. The Schears Have Been Married for Two Years & Are the Latest Example of Passenger Viral Videos

Most of the public photos on Brittany Schear’s Facebook page showcase the couple’s wedding. The couple was married in 2015, according to her Facebook page.

Now, they’ve been thrust into the national spotlight as the latest example of alleged passenger mistreatment by an airline. Most notoriously, United Airlines settled with a Kentucky doctor, David Dao, after security dragged Dao out of an airplane when he wouldn’t give up his seat so a crew could get to Louisville.

The video images of Dao – with his bloodied face – horrified people all over the country and thrust airline customer service under the microscope.

After the Dao incident, an American Airlines flight attendant was accused of “violently” taking a stroller from a woman with a baby, causing her to start crying. The incident was caught on video as another passenger intervened.

Then, there was the case of a man on a flight to Milwaukee, who was kicked off the plane when he used the bathroom. That incident also occurred on a Delta flight. You can watch that video here: 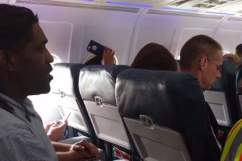 4. Brian Schear Is President of a Vehicle Inspection Company & Delta Is Now Apologizing for the Incident

According to his LinkedIn site, Brian Schear has made a career in business in Orange County. He even has patents in his name.

Since 2014, he’s been president of ConditionReports.com in Orange County, California.

Schear has patents in the vehicle inspection area.

On social media, many people were taking the side of the Schear family.

@brianschear Just saw the video. U & UR handled that so amazingly well. Really showed the ugliness of Delta greed. Lack of family values.

@Delta Do Delta always treat passengers with such disrespect. I just watched the Brian Schear video. Asking a family to leave.. disgusting.

Some people sided with the airline.

Delta has now apologized for booting the Schears off the flights. The airline said it would refund the family’s tickets and provide them “additional compensation,” according to Reuters.

Delta also released a statement to ABC 7 that reads, “We’re sorry for what this family experienced. Our team has reached out and will be talking with them to better understand what happened and come to a resolution.” 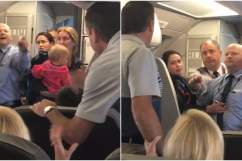 5. The Family Claims They Were Threatened With Jail & Losing Their Children

The rhetoric during the incident escalated to the point the Schears were told their children could end up in foster care.

Brian Schear contends the family was told: “You have to give up the seat or you’re going to jail, your wife is going to jail, and they’ll take your kids from you.”

“So- wait, we’re going to be in jail and my kids are going to be – what? I bought that seat,” Brian Schear says in the video, shocked.

He is repeatedly told it would be a “federal offense” if he doesn’t give up the seat.

“You need to do what’s right. I bought the seat, and you need to just leave us alone,” Schear says.

Media reports say the airline workers may not have been correct in informing Schear he couldn’t put the 2-year-old in a car seat in an airplane seat.

According to ABC 7, “One airline employee tells him that under FAA regulations, 2-year-old children are not supposed to have their own seats at all and are supposed to sit in parents’ laps for the duration of the flight…The accuracy of that statement is not entirely clear, as the websites for both the FAA and Delta appear to encourage parents to buy separate seats for young children and use a child safety restraint system.”

Brian Schear says in the video, “Helping us would be not overselling the flight.”

Read More
5 Fast Facts, Breaking News, California, Delta Airlines
Brian Schear and his wife, Brittany, were kicked off a Delta flight in the latest video to go viral. The airline wanted them to give up a seat they'd paid for.