Edward Crawford, the man who became famous when he was pictured throwing a tear-gas canister during the 2014 riots in Ferguson, Missouri, has died. According to the St. Louis Post-Dispatch, Crawford, 27, died of a gunshot wound to the head sometime on Thursday May 4th. Police have yet to issue an official cause of death, as they are waiting on the autopsy report. Still the death has affected supporters of the Black Lives Matter Movement, many of whom have paid tribute to Crawford on social media.

Edward Crawford is dead. Found in his car shot to death. He is #Ferguson's hero. For those of us tear-gassed, he was our local champion. RIP pic.twitter.com/RHtBEB174G

Why are Ferguson protestors ending up dead? RIP Edward Crawford, you're a true hero ❤️

A black lives matter activist Edward Crawford was found dead in his car. He was shot. Say his name. Rest In Power #EdwardCrawford pic.twitter.com/RZtWuFsFcA

Learn more about the activist’s life, his participation in the Ferguson protests, and the mysterious circumstances surrounding his death below. Here are five fast facts about Edward Crawford.

1. He Was Charged With Assault & Police Interference

In an interview with CNN (and his first interview ever), Crawford explained the circumstances that led to the famous photo of him holding a bag of chips in one hand and a tear gas canister in the other. He revealed that he was not, as was initially thought, throwing the canister at the police as a means of combat, saying “Before the photo was taken, the canister… was shot and it landed a couple of feet away from me and some children standing on the sidewalk.”

Crawford added that he was not “throwing the canister at the police; I was merely getting the canister away from me and the kids… I can’t even throw a baseball throw a baseball that far, let alone a burning can of tear gas.” Despite this claim, Crawford was still charged with assault and interfering with a police officer. In a 2015 interview with The Huffington Post, Crawford spoke on these charges and police brutality as a whole, saying “In some parts of the world, this is unfamiliar. The police crimes are very low, police officers are respectable in a lot of places. Every police officer isn’t bad. There’s a lot of good police officers out there who protect and serve. But you also have some who seem to not.”

2. He Was Proud to Be in the Famous Photograph

Met Edward Crawford today in #Ferguson. The iconic photo of him taken by @kodacohen will be remembered forever. pic.twitter.com/978teVW2yK

Initially, the man in the famous photograph was unknown by the world, and it wasn’t until Crawford stepped forward and identified himself that the media and law enforcement knew who he was. And despite the charges that were sent his way as a result, Crawford was still proud of the Pulitzer Prize-winning photograph, which was taken by St. Louis Post-Dispatch photographer Robert Cohen. It has since been printed onto T-shirts, reinterpreted by artists, and even plastered onto cell phone cases.

In his CNN interview, Crawford told host Brian Stelter that he was “happy” the photo had gone viral, and shined a light on a serious issue in society: “I am happy the media is in my town, because this attention that we’re getting, I just hope we turn it into something positive. With the attention, I hope our voices are heard and I hope our pain is felt by America. So, I don’t want the cameras to leave. I hope they stay as long as they can and just capture positive moments, positive protests.” Crawford chimed in on this viewpoint with The Huffington Post, saying “They can’t leverage change. That’s a good thing that’s come out of this.”

3. His Death Is Being Ruled a Suicide

Crawford’s father, Edward Sr., confirmed his son’s death to the St. Louis Post-Dispatch on Friday morning. He said his son’s mother called him and they went together to the morgue on Friday morning to identify their son’s body. According to he medical examiner office, Crawford’s death was a suicide that occurred at approximately 11:46 a.m. on Thursday. The shooting occurred in the 1400 block of Salisbury Street, in the city’s Hyde Park neighborhood. That being said, the official cause of death is reportedly pending an autopsy.

The police have stated that Crawford was in the back seat of a car at the time of his death, and that two unidentified women were with him. The car was “heading east on Salisbury, approaching Blair Avenue near Hyde Park, when the gun went off.” The two women claim that Crawford was distraught over what he called “personal matters.” They heard him reaching for something in the backseat, and “the next thing they knew he shot himself in the head.”

4. His Father Claims He Was In ‘Good Spirits’ Before His Death

Despite the testimony of these two women, and the medical examiner’s reports, Edward Crawford, Sr. has doubts over his son’s alleged suicide. While speaking with the St. Louis Post-Dispatch, he claimed that his son’s death was nothing more than a tragic accident: “I don’t believe it was a suicide. He went on to reveal that the police are keeping details of the case from him, saying “they’re being very hush-hush.”

Later in the interview, Edward Sr. said that he had seen his son two days prior to his death, and that he seemed normal: “He was wonderful, great, always in a good mood.” Additionally, it was revealed that Crawford was just beginning a new job, and was planning on moving out of his apartment on the 7000 block of Dover Court in University City. He’s survived by his four daughters.

5. He Isn’t the First Ferguson Activist to Die Under Mysterious Circumstance

Oddly enough, Crawford is actually one of many high-profile Ferguson protestor to be found dead of gunshot wounds in recent years. Darren Seals, another well-known activist in the community, was found shot dead in a burning car in September 2016. His body was located near a concrete mixing plant that was within five miles of his home. As of this year, it remains unsolved.

In November 2014, protester DeAndre Joshua was shot in the head execution-style, and was then left in a torched car. Eerily enough, it occurred on the same night that the grand jury decided not to indict officer Darren Wilson in the Brown shooting. In a 2016 article, The Daily Beast also reports similar fates for men like Antonio Jones and Terrell Beasley. Read more about these unsolved cases right here. Various people have also taken to social media to voice their skepticism in the ruling of Crawford’s death.

If I'm not mistaking, Edward Crawford is like the 3rd Ferguson activist dead since Mike Brown. Not one for conspiracy theories but, KAY!

Edward Crawford is the 2nd high profile Ferguson protester found dead in his car in under a year. https://t.co/1wkDCX00mj

Edward Crawford is the 7th ferguson protester found shot dead in his car in the past 3 years. No talk of a pattern by the media or police.

Darren Seals was found dead the same way, so there's no reason to even think Edward Crawford would take himself out like that. 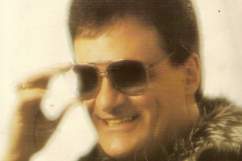 Loading more stories
wpDiscuz
6
0
Would love your thoughts, please comment.x
()
x
| Reply
Edward Crawford, the activist who was immortalized in a photo during the 2014 Ferguson riots, has been found dead of an apparent suicide. Learn about his life and his legacy here.