A woman begging for change on a roadside in Richmond, Virginia was caught on-camera walking back to her Fiat model car in a McDonald’s parking lot. According to Maryland MVA records, the car is a 2016 Fiat 500X Easy. It also appears that she’s the original owner and it was bought new.﻿ Her cardboard sign claims that she’s homeless. However, she later claims in the video that she has a disability.

“What’s your disability?” the man filming her asks.

The woman refuses to respond and seeks help from McDonald’s employees who refuse to assist her.

The woman continues to grow more irate, telling the man filming her that his actions are going to get him killed.

“For what?” the man filming asks.

“For harassing me,” the woman responds. She then walks back to her car with Maryland license plates.

“How much do you get from the government? From the state and disability every month?” the man asks, continuing his documentation of the woman.

The man then zooms in on her license plates and stops filming.

In the commentary about the video on YouTube, one person claiming to be a local said about the woman, “She also has a dark green Nissan Xterra and a silver PT Cruiser.” 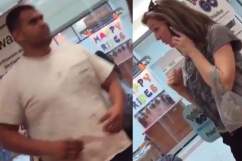 Read More
Homeless, Youtube
A woman begging for change on a roadside in Richmond, Virginia was caught on-camera walking back to her Fiat model car in a McDonald's parking lot. Her cardboard sign claims that she's homeless.