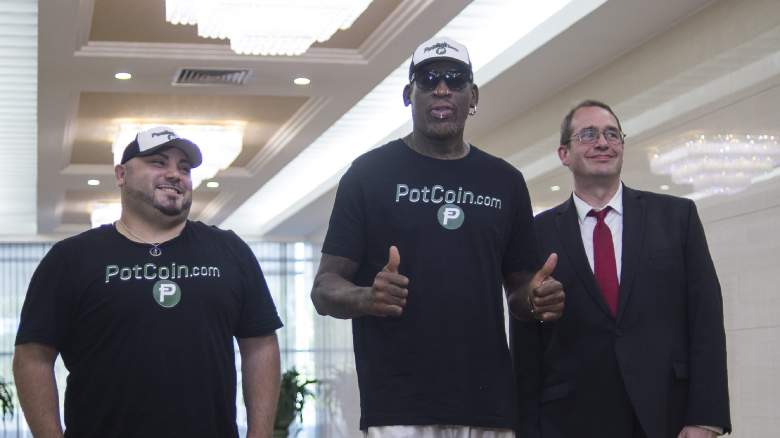 Flamboyant former NBA star Dennis Rodman (C) of the US poses with members of his party following his arrival at Pyongyang International Airport on June 13, 2017. (Getty)

The State Department says so. A spokesman said that Rodman had nothing to do with Warmbier’s release.

There’s no evidence that Rodman helped secure the release of Warmbier, a University of Virginia college student sentenced in 2016 to hard labor for ripping down a propaganda poster. The Secretary of State’s initial statement on Warmbier’s release made no mention of Rodman.

U.S. Secretary of State Rex Tillerson announced June 13 that Warmbier was being released. Sadly, though, The Washington Post is reporting that the college student has been in a coma for a year and is being medically evacuated from North Korea. He is supposed to return home to Cincinnati on Tuesday, the Post reported.

The timeline doesn’t work regarding Rodman. The Post reported that North Korea told the United States Warmbier was in a coma on June 5, and that Trump ordered his medical evacuation at that time, which kept quiet until now. “This is a Trump-led effort,” the Post quoted a source as saying.

However, Korean media is reporting that the coincidence of Rodman’s arrival coinciding with the Warmbier release announcement has some Koreans talking. Also raising eyebrows: The fact that Dennis Rodman is close to Donald Trump: He starred on Donald Trump’s television show, The Apprentice.

It would certainly be the plot of a movie if it ended up that a controversial American basketball had performed a diplomatic function in securing the release of an American hostage (it almost writes itself), but stranger things have happened, especially in North Korea.

Noon in Korea, a Korean news site, reported that some Koreans think Rodman was dispatched to help free Warmbier and other American hostages.

“Some Koreans think Rodman may try to secure release of 4 US hostages being held in NK: Otto Warmbier/ Kim Hak Song/Tony Kim & Kim Dong Chul,” the site wrote on June 12, the day before Secretary of State Rex Tillerson announced that Warmbier was, in fact, being released.

The Washington Post, earlier on the morning of June 13, asked in a news headline whether Rodman was sent to North Korea by Donald Trump. Rodman had previously visited North Korea. “Rodman’s trip has sparked speculation that he may be traveling to free the four American citizens being held by North Korea, perhaps as a first and important step toward lessening tensions between Washington and Pyongyang,” The Post wrote, noting that Trump is said to be desiring a secret channel to communicate with Pyongyang and defuse tensions.

Warmbier was on a tour to North Korea when he was accused of tearing down the propaganda poster and sentenced to 15 years of hard labor in a North Korean prison. His parents and the U.S. government have worked for his release ever since. He is not the only American said to be held hostage by the North Korean regime.

North Korea even paraded Warmbier before the television cameras, forcing him to deliver propaganda statements.

You can read more about Otto Warmbier’s release here: 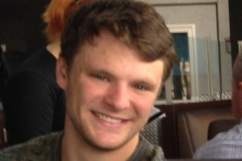 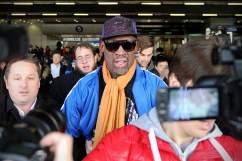