Atlanta’s mayoral election has attracted a crowd of candidates this year, and one of the frontrunners is City Council President Ceasar Mitchell.

Mitchell has served as president of the city council since 2009, and also previously held a citywide post on the council, representing Atlanta at-large. In recent months, he has become embroiled in a feud with incumbent Mayor Kasim Reed, who is supporting Mitchell’s rival and fellow councilmember, Keisha Lance Bottoms.

In order for a candidate to win outright in Atlanta’s nonpartisan mayoral race, they must get more than half of the vote during the election in November. If no candidate wins outright, a runoff election between the top-two vote-getters takes place the following month.

Here’s what you need to know about Ceasar Mitchell:

GettyLudacris, Mayor of Atlanta Kasim Reed, and Tyrese Gibson attend “The Fate Of The Furious” Atlanta red carpet screening at SCADshow on April 4, 2017 in Atlanta, Georgia.

Over the past few months, Mitchell’s relationship with incumbent  Mayor Kasim Reed has been rather publicly deteriorating.

In late August, Mitchell called for the city to suspend approving new vendor contracts until after the November election, citing a recent federal investigation that resulted in two city contractors pleading guilty to paying bribes in exchange for winning city contracts.

The city council president also pointed to rumors he had heard that the city was fast-tracking contract approvals in an effort to push through projects before Reed leaves office in January. “My concern is if you are rushing something that we haven’t typically rushed, the likelihood or the chance of making a mistake is greater,” Mitchell told the Atlanta Journal-Constitution. “And given the scrutiny we are under right now as a city, I think that is not prudent.”

Mayor Reed responded to the request with a withering statement that accused Mitchell of political grandstanding:

Although Ceasar will not become Mayor, he should understand that there is only one Mayor at a time, and that mayors who are fortunate enough to be elected and then re-elected serve 8-years, not seven-and-a-half . . . He wants to be able to delay important projects for the City of Atlanta so that he can solicit contributions from those businesses while he is running, in hopes that he will deliver a specific result on the remote chance that he wins.

Mitchell later continued to question the practices of Reed’s outgoing administration, raising concerns about the mayor’s desire to “dismantle the Ethics Board” and the ongoing solicitation of bids for retail concessions at the Atlanta Airport, despite the current contract not expiring until September 2018.

On August 31, Mayor Reed held a press conference in which he unveiled several large placards claiming that Mitchell “has paid the second-highest ethics fines of any sitting elected official in Atlanta municipal government.”

Reed left the placards on tripod displays outside of his office, which prompted an anonymous individual to file an ethics complaint alleging that the mayor was using city funds to campaign on behalf of a mayoral candidate. Though Reed has not officially endorsed anyone, he is a close friend of Mitchell’s rival, Councilwoman Keisha Lance Bottoms, and has strongly supported her candidacy.

“The recent comments coming from our embattled lame-duck Mayor are the most unfortunate, petty and immature display I have seen since my 6-year-old daughter took her 4-year-old sisters notepad for no reason at all,” Mitchell responded to Reed’s allegations, adding that the fines he had paid were administrative in nature and unrelated to any ethics matter.

The city attorney ultimately dismissed the ethics complaint against Reed as without merit.

2. A Volunteer for Mitchell’s Campaign Was Later Arrested for Stealing the Signs From Reed’s Office, Without Mitchell’s Knowledge

About three weeks after Reed unveiled the signs, they disappeared.

The thief, who was caught on film, was apprehended by the Atlanta Police Department the day after he took the placards. Security cameras showed a man reading one of the them, casually picking it up, then moving to the next one and picking it up until he had collected all four. As he walks out of camera range with the four large foam boards under his arm, two women enter and exit the scene without giving him a second glance.

Police charged 54-year-old Terry Morris, a volunteer on Mitchell’s campaign, with misdemeanor theft after identifying him as the man in the security footage the day after the theft. Morris has previously been arrested for theft on multiple occasions and has served time in both state and federal prison.

“I am not aware of that was not aware of that and we don’t typically do background checks on volunteers. He’s a passionate volunteer and whether he’s been volunteering for a day or a year we certainly appreciate all those who support my vision for moving the city forward,” Mitchell told the local FOX affiliate, who informed him of the arrest.

“Morris was not instructed by the campaign to remove the signs, nor was he authorized to do so,” the city council president said in an official statement.

A spokesperson for Mayor Reed said that the signs “were stolen by an individual trying to prevent the facts on the signs from being known.”

In July 2017, Mitchell was endorsed by national civil rights leader Rev. Joseph Lowery. A friend and compatriot of Dr. Martin Luther King, Lowery is a co-founder and former chairman of the Southern Christian Leadership Conference, and his activism on behalf of the black community has spanned decades.

Speaking from Clark Atlanta University, Lowery said at a press conference that he believed Mitchell was the most qualified candidate in 2017’s mayoral race. “He will not have to have a training period to learn what the mayor does,” said the reverend.

Lowery is not the first nationally-recognized name to be associated with Mitchell’s campaign. His campaign manager, Lance Orchid, served as the deputy field manager for Georgia during Obama’s 2008 presidential campaign, and also worked as a regional grassroots director for Hillary Clinton’s second bid for the White House.

The chief strategist for Mitchell’s campaign, Richard McDaniel, was also Clinton’s southern regional director in 2016, and is a former political director for the Democratic Party of Georgia.

GettyChildren try to sled down snow dusted hills at Piedmont Park on January 8, 2010 in Atlanta, Georgia. The metro Atlanta area had a rare snowfall that has caused travel delays, school closings and dangerous road conditions.

In August 2017, Mitchell hosted the 6th annual Back to Business Conference, a three-day networking event for entrepreneurs and small business owners. The free annual conference has garnered about 4,000 attendees to date.

This year, the conference will hold panels and workshops about how to leverage social media, TV and film opportunities, as well as an exhibition attended by procurement officers from all levels of government, as well as Fortune 500 companies like The Home Depot, The Coca Cola Company and Porsche Cars North America.

“Regardless of how innovative and well-crafted her business plan may be, an entrepreneur’s success can hinge on access to the right intellectual capital, financial resources, and decision-makers,” Mitchell said of the event. “Through the Back to Business Conference, I set out to help make that access a reality for minority, veteran and women owned-businesses.”

Throughout his tenure on the City Council, Mitchell has participated in a number of civic workshops, including the 22nd semi annual College Prep Series offered by Atlanta Public Schools.

The event offers high school students the opportunity to take a free practice test for the SAT or ACT, plus college admission workshops and a session for students to review their scores under the guidance of the Princeton Review.

5. An Attorney, He Is Married to Tiffany, an Educator on the Board of a Local Charter School, With Whom He Has Three Children

My beautiful wife @DrTiffanyYM reminded us all to never take anything for granted! BTW, she looks hot! #WomenForCeasar pic.twitter.com/pv2TlPgqdu

Mitchell graduated from the University of Georgia School of Law in 1995 and immediately went to work at the law firm of Thomas, Kennedy, Sampson & Patterson, specializing in real estate and lending.

He stayed with the firm through his first successful campaign for City Council in 2002, when he won a citywide post representing Atlanta at large. During his tenure as a councilmember, Mitchell moved to the firm of Epstein Becker & Green, adding public sector transactions to his list of specialties.

His wife, Tiffany, is an educator who sits on the board of The Atlanta Neighborhood Charter School. She holds an Ed.D. in curriculum instructional leadership from Argosy University Atlanta, and is also the founder of ATL Read, Inc., a nonprofit literacy program geared toward children in underserved communities.

The couple have three children: daughters Canon and Czarya, and son Ceasar III. 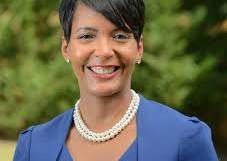 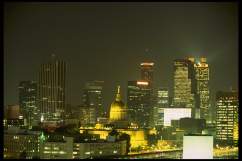 Read More
Atlanta, Politics
wpDiscuz
0
0
Would love your thoughts, please comment.x
()
x
| Reply
Atlanta's mayoral election has attracted a crowd of candidates this year, and one of the frontrunners is City Council President Ceasar Mitchell. Here's what you need to know.