Getty President Donald Trump at the White House, on January 11, 2018.

The White House did not deny that President Trump called Haiti, El Salvador and African nations “shithole countries” in a statement in response to a Washington Post report.

According to The Post, Trump said during a private meeting with lawmakers Thursday in the Oval Office, “Why are we having all these people from shithole countries come here?” He then said the United States should bring in more people from Norway, according to newspaper’s report. Trump had met with Norway’s prime minister Wednesday. Trump’s “shithole” comment left lawmakers taken aback, according to the report. CNN has confirmed the comments were made during the meeting attended by seven lawmakers.

The meeting Thursday was held as the Trump administration and members of Congress work toward a bipartisan immigration deal centered around restoring DACA and protecting DREAMers. Trump’s comments came after lawmakers floated restoring protections for people from El Salvador, Haiti and Africa, which his administration has stripped away recently.

According to CNN, Senator Dick Durbin, a Democrat from Illinois, was explaining to Trump a proposal to end the visa lottery system in exchange for Temporary Protected status for countries like El Salvador. Durbin then went through a list of countries that would be covered, and when he got to Haiti, Trump asked why the U.S. would want more people from Haiti and African countries, sources told CNN.

You can read the White House’s statement on the report, which does not include a denial of the Trump comments:

NEW: WH response to reported “shithole” countries comment from @POTUS (note: not a denial that he said it.) pic.twitter.com/1QpWqRl0jl

“Certain Washington politicians choose to fight for foreign countries, but President Trump will always fight for the American people. The President will only accept an immigration deal that adequately addresses the visa lottery system and chain migration – two programs that hurt our economy and allow terrorists to enter our country,” the White House statement said. “Like other nations that have merit-based immigration, President Trump is fighting for permanent solutions that make our country stronger by welcoming those who can contribute to our society, grow our economy and assimilate into our great nation.”

The statement adds, “He will always reject temporary, weak and dangerous stopgap measures that threaten the lives of hardworking Americans and undercut immigrants who seek a better life in the United States through a legal pathway.”

>>>WH staff is celebrating, not backing off, Trump’s “sh*thole” comment saying it will play well with his base, reports @kaitlancollins

Staffers inside the White House aren't that worried about Trump's "shithole" remark — with some predicting it will actually resonate with his base, not alienate it, much like his attacks on NFL players who kneel during the national anthem did.

According to the New York Times, Trump grumbled during a meeting on immigration last year that people from Haiti “all have AIDS.” He also said that people who have come to America from Nigeria would never “go back to their huts” in Africa. The White House did deny those comments.

Rep. Mia Love, a Haitian-American Republican from Utah, issued a statement about the comments:

Here is my statement on the President’s comments today: pic.twitter.com/EdtsFjc2zL

There had been reports earlier Thursday that the bipartisan “Gang of Six” group of senators had reached a compromise on immigration. Durbin told reporters that the group was rebuffed and told to keep working.

White House Press Secretary Sarah Huckabee Sanders said Thursday “There has not been a deal reached yet. We haven’t quite gotten there, but we feel like we’re close.”

Along with Durbin, the Thursday meeting in the Oval Office was attended by Republican senators Lindsey Graham, Tom Cotton and David Perdue and Republican Congressmen Kevin McCarthy, Bob Goodlatte and Mario Diaz, according to CBS News.

After the meeting, Durbin told reporters, “I’m not sure what the next step will be. The President invited us to — at his little get-together in the Cabinet room — to come up with proposals, and we did. It’s a bipartisan proposal which we’ve worked on for four months in the Senate, and I don’t know what happens next.” 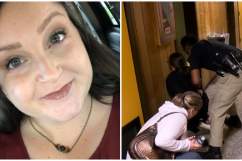 WATCH: Teacher Deyshia Hargrave Speaks Out About Her Arrest

Read More
Breaking News, Donald Trump, Politics
The White House issued a statement in response to the report that President Trump called Haiti, El Salvador and African nations, "shithole countries," but did not deny it.