Indra Nooyi is the Chairwoman and CEO of PepsiCo. The Indian-American business executive joined PepsiCo in 1994 and worked her way up the corporate ladder. She was named CFO in 2001, before becoming President and CEO in 2006, replacing Steven Reinemund.

Nooyi was born in Chennai, India, and moved to the United States in 1978. In India, Nooyi worked  as a product manager for Johnson & Johnson.

Nooyi, 62, recently made some comments comparing the ways that men and women snack, and those comments have caused a debate on social media. Some people have even called Nooyi “sexist.”

1. She’s Being Slammed as ‘Sexist’ Following Comments That Sparked a Debate Over ‘Lady Doritos’

Nooyi has caused a huge debate on social media after making the following comments comparing the way men and women snack.

“When you eat out of a flex bag — one of our single-serve bags — especially as you watch a lot of the young guys eat the chips, they love their Doritos, and they lick their fingers with great glee, and when they reach the bottom of the bag they pour the little broken pieces into their mouth, because they don’t want to lose that taste of the flavor, and the broken chips in the bottom. Women would love to do the same, but they don’t. They don’t like to crunch too loudly in public. And they don’t lick their fingers generously and they don’t like to pour the little broken pieces and the flavor into their mouth,” Nooyi said during a chat with “Freakonomics Radio.”

She went on to say that the company plans to come out with a snack that has a “low-crunch” and a “full taste profile” that will appeal more towards women. She added that the company wanted to make their snacks more portable “because women love to carry a snack in their purse.”

“It’s not a male and female as much as ‘are there snacks for women that can be designed and packaged differently?’ And yes, we are looking at it, and we’re getting ready to launch a bunch of them soon. For women, low-crunch, the full taste profile, not have so much of the flavor stick on the fingers, and how can you put it in a purse? Because women love to carry a snack in their purse,” Nooyi said.

You can read a few of the responses from Twitter below.

My generation marched so future generations of women could enjoy Lady Doritos.

women: give us equal pay, stop harassing us, stop literally threatening our lives
brands: how about quiet doritos for women?
women: no, that's–
brands: snacks you can fit into your purse!
women: what? no–
brands: a pen that's comfy for your lady hands!

Women: We want equal pay for equal work and an end to sex discrimination in the workplace.

Society: Here’s a bag of Lady Doritos so you won’t have to crunch too loudly in front of your male colleagues.

2. She Is Married to Raj K. Nooyi, the President of AmSoft Systems & Is a Baseball Fan

Nooyi is married to Raj K. Nooyi, the president of AmSoft Systems. The two tied the knot in 1980 and have two daughters together, Preetha Nooyi and Tara Nooyi. The family lives in Greenwich, Connecticut.

Before joining AmSoft in 2002, Mr. Nooyi worked as a manager at Hewlett-Packard Company.

When Mrs. Nooyi first moved to the United States, she became a fan of baseball — and the New York Yankees.

“When I first got to the country (America) in 1978, I used to play cricket here and so I needed a bat-and-ball sport, because I missed it. And that was the year when the Yankees were going through an incredible season. I fell in love with the Yankees then. But then I also discovered that in business, the language of business is sports. So, people would talk about ‘I do not want to get singles’, ‘I want to get homerun.’ And the next day morning, everybody in business analyzed the game and unless we were the part of the whole process, we felt very left out. So I combined my love for, or an urge to have an affiliation to the bat-and-ball sports, with the Yankees’ incredible season with this language of business. Things came together. So, I went to school to study baseball with Yankees. Even today, I love the game,” Nooyi told The India Times in 2007.

Nooyi attended Yale School of Management, enrolling as a freshman in 1978. She earned her master’s degree in Public and Private Management. While studying for her degree, she completed an internship with Booz Allen Hamilton. After graduating, she went on to work for Boston Consulting Group (BCG), Motorola, and Asea Brown Boveri.

4. She Wants to Make Pepsi Healthier

Nooyi has been spending time trying to make Pepsi healthier, while at the same time making sure her company is catering to customers who love their sugary soft drinks.

“I think the consumer moving toward a Whole Foods and Trader Joe’s is still a fringe-ish trend. But we don’t want to give up that growth. So we have been moving our product line to create natural, organic, and GMO-free products. Could we do more? Yes, but I worry about the availability of the raw materials. Being a large company, if we say something is organic, it better be organic. The labeling has very high standards. If anything, it’s a supply-chain challenge,” Nooyi recently told Fortune.

5. She Made the Decision to Pull Kendall Jenner’s Controversial Pepsi Ad

This Doritos controversy isn’t the first time that Nooyi has had to deal with backlash from the internet.

Back in 2017, a controversial Pepsi ad starring Kendall Jenner caused a complete uproar, causing Pepsi to pull the ad. The ultimate decision to can Jenner’s commercial was made by Nooyi.

“I’ve thought about it a lot because I looked at the ad again and again and again trying to figure out what went wrong—because it was a peace march not a protest march. It was people in happiness coming together. I realized the scene that caused the most consternation was the final one, when Kendall Jenner gave a Pepsi to the policeman, and it linked back to Black Lives Matter,” she told Fortune in September.

“This has pained me a lot because this company is known for diversity, and the fact that everybody who produced the commercial and approved the commercial did not link it to Black Lives Matter made me scratch my head. I had not seen that scene. And I take everything personally. The minute I saw people upset, I pulled it. And you know what, it’s not worth it. There were people on both sides, but at the end of the day, our goal is not to offend anybody,” she added. 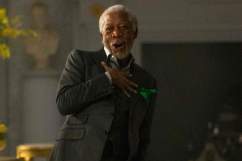 Loading more stories
wpDiscuz
0
0
Would love your thoughts, please comment.x
()
x
| Reply
Indra Nooyi is the CEO of PepsiCo. She is under fire after making comments about how women snack, making "Lady Doritos" become a trend on Twitter. Here is what you need to know.