Getty Police block a road near a newly installed pedestrian bridge, that collapsed, over a six-lane highway in Miami, Florida on March 15, 2018.

Figg Bridge Engineers partnered with Munilla Construction Management (MCM) to design and build the UniversityCity Bridge at FIU that collapsed Thursday. The bridge collapsed around 2:25 p.m. Eastern on Thursday, leaving multiple cars trapped beneath the bridge. Police confirmed that there were multiple deaths. Figg is an internationally known company with a strong record, but in 2012 a bridge project that it oversaw in Virginia also collapsed during construction. A couple days before the bridge’s collapse, FIGG’s lead engineer called the Florida Department of Transportation to let them know there was some “cracking” on the bridge. Here is everything you need to know about Figg, including a list of other bridges that Figg has built and designed around the country.

1. A Lead Figg Engineer Called the Florida Department of Transportation a Couple Days Before the Collapse and Said ‘Some Cracking’ Had Been Observed

Just a couple days before the bridge collapsed, W. Denney Pate, Figg’s lead engineer responsible for the project, called the Florida Department of Transportation and said “some cracking” had been observed and some repairs would have to be done, but they didn’t think there were any safety issues. The FDOT message was not heard until Friday, because the employee that Pate called had been out of the office. WFLA provided a transcript of the phone call, which you can read below. It’s not clear at this time if those cracks were a contributing factor in the collapse. They were observed on the north end of the structure, which early reports say may have been the part of the bridge that failed, The Miami Herald reported.  However, cracks are sometimes observed in concrete construction and may be cosmetic. Until the National Transportation Safety Board completes its investigation, it won’t be known what caused the collapse. Here’s the transcript of Pate’s voicemail:

You can hear Pate’s voicemail here or listen to it below:

A spokesman for Figg told the Miami Herald on Friday: “The evaluation was based on the best available information at that time and indicated that there were no safety issues. We will pursue answers to find out what factors led to this tragic situation, but it is important that the agencies responsible for investigating this devastating situation are given the appropriate time in order to accurately identify what factors led to the accident during construction.”

2. Figg Has Built & Designed Bridges Around the Country: Here’s a List

Bridges to the Future, Part III: Standing StrongIn this National Science Foundation program, Linda Figg, president and CEO of Figg Engin, leads a group of distinguished panelists in a discussion of state-of-the-art technology and how it can be used to improve dams, buildings, roads and more to avoid a repeat of the I-35W Bridge Collapse of 2007.2008-12-13T00:33:15.000Z

Figg Engineering Group is a family of engineering companies based out of Tallahassee. That’s why you might hear about different FIGG projects connected to companies with slightly different names. Figg Bridge Engineers, Inc., also based in Tallahassee, provides construction services, according to its bio on Bloomberg. “The Company offers designing, remodeling, inspection, and management and construction engineering services for rail, arches, urban, cable stayed, and long span bridges. Figg Bridge Engineers serves customers in the United States.”

Figg Bridge Group has designed many bridges of all types, according to its website, including urban bridges, long-span bridges, arches, cable-stayed bridges, and rail bridges. They design bridges as art. According to their website: “Bridges designed by FIGG are purposeful works of art, functional sculptures within the landscape, that are created through a careful analysis of the site, contextual and environmental sensitivity, and a regional approach that encompasses a community’s particular needs…”

The company was launched four decades ago by Eugene Figg, Jr., and is now run by his daughter Linda Figg. She works out of the same office her dad once worked in. They have built and managed bridges in 42 states and six countries, and won more than 355 awards of excellence. 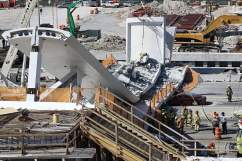 3. Figg Said They Were Stunned by the Collapse & Are Fully Cooperating with Authorities

Miami-Dade Fire Rescue Department personnel and other rescue units work at the scene where a pedestrian bridge collapsed a few days after it was built.

Figg said in a statement that it was stunned by the bridge collapse. “Our deepest sympathies are with all those affected by this accident. We will fully cooperate with every appropriate authority in reviewing what happened and why. In our 40-year history, nothing like this has ever happened before. Our entire team mourns the loss of life and injuries associated with this devastating tragedy, and our prayers go out to all involved.”

In February 2016, it was announced that MCM and Figg Bridge Engineers would partner to build the UniversityCity Bridge. The pedestrian bridge cost $9.3 million, and MCM-FIGG were also contracted to build other related streetscape elements that would link Sweetwater with the northern entrance of FIU over Southwest 8th Street, FIU reported. FIU, the Federal Highway Administration, and the Florida Department of Transportation all approved the selection of MCM. Sweetwater and Miami-Dade Transit also participated in the selection process. The bridge was part of an $11.4 million UniversityCity Prosperity Project, which would also included improving entrances to MMC and the 109th Avenue area, along with partnering with IBM to create a Smart Parking Software System. They completed the FIU Football Stadium Expansion in August 2012. 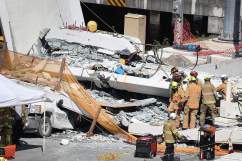 4. Figg Faced Inquiries in 2012 After a Virginia Bridge Collapsed While Under Construction, But No One Was Seriously Injured

In June 2012, a Figg-assembled bridge span in Virginia called the Jordan Bridge collapsed while under construction, Miami New Times reported. This happened while workers were installing a 90-ton concrete portion of the bridge. It dropped 40 feet onto the railroad tracks and four workers had minor injuries, none of which required going to the hospital for treatment. Later, the Virginia Department of Labor and Industry cited Figg Bridge Builders with four violations, each with a $7,000 fine for a total of $28,000, Pilot Online reported. One alleged that the builder didn’t get a manufacturer’s consent before modifying a girder used during construction that failed. Citations also said that Figg didn’t do daily, weekly, and monthly inspections of the girder; didn’t provide adequate training for that equipment, and didn’t have specific safety procedures in place for repair and maintenance.

Jay Withrow of the Department of Labor and Industry said they were not alleging that the citations contributed to the equipment failure in June 2012. He told Pilot Online: “Trying to figure out what failed in what sequence is difficult. We’re not saying one way or another whether (the alleged violations) had anything to do with the accident at this point.”

Figg Project Manager W. Jay Rohleder said this was not connected to the bridge’s stability. “The incident that occurred during construction was a construction equipment property damage issue that had nothing to do with the final bridge. The proposed citation is not related to the structural integrity of the completed project in any way and is not the reason the erection truss required replacing.”

The girder was used to support pieces of the bridge as it was built across the river. The girder was modified because it had been intended for a straight bridge but needed to accommodate curves in the Jordan Bridge.

5. The FIU Bridge Was Funded By a USDOT Grant of $14.2 Million And Installed Using ‘Accelerated’ Methods

The FIU bridge was a joint project of MCM Construction and Figg Bridge Design. The U.S. Department of Transportation funded the bridge with a $14.2 million grant. The bridge was installed on March 10 using an accelerated construction method, New York Daily News reported. The 174-foot span was installed in just one day using Accelerated Bridge Construction. FIU reported: “This method of construction reduces potential risks to workers, commuters and pedestrians and minimizes traffic interruptions. The main span of the FIU-Sweetwater UniversityCity Bridge was installed in a few hours with limited disruption to traffic over this weekend.” However, New York Daily News reported that Professor Amjad Aref of the University of Buffalo was concerned that this new method might bring risks. He said: “The idea is that you can build small- to mid-size bridges very quickly, sometimes within hours. But until all the pieces are put together to transmit the loads safely to the foundations, these bridges may suffer disproportionate or full collapse due to instability.”

Linda Figg, CEO of Figg Bridges, explained in an interview with Founders Club why the company’s slogan is “Creating Bridges as Art.” She said that when the company was first started, the Federal Highway Administration had a program that required any bridge that cost over $10 million to have an alternate design. Figg focused on creating those alternate designs, and over time began to win awards for aesthetics.

“They were winning awards for aesthetics because the economy, elegance, and efficiency of the design and the streamlined shapes were creating great beauty. So over time, we added the slogan: ‘Creating bridges as art,’ because it’s the art of the science and the aesthetic; everything goes into the art of the bridge. … We like to think of the bridges as sculptural works of art that are also economical, quick to build, and low-maintenance, so they have the total package. … We believe that the quality of life in a community is represented by the infrastructure that people see there.” Here’s a separate interview with her below:

Cline Avenue March 2013 UpdateOn Thursday, March 7, 2013 Linda Figg President of Figg Bridge Builder and Member of United Bridge Partners met with Mayor Anthony Copeland regarding the on-going development activities being accomplished by the bridge building team while the demolition phases are being completed by the Indiana Department of Transportation. Concurrently the next couple of months, Linda…2013-03-08T19:24:08.000Z

As a child, Figg dreamed about building things high in the air, Tallahassee Magazine reported, and that led to her life’s work of building bridges that are also considered works of art. 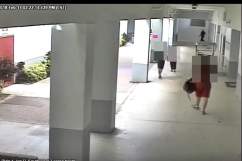 Read More
5 Fast Facts, Breaking News, Florida
FIGG Engineers helped build the bridge that collapsed in Florida and an engineer saw the crack before the collapse. They also had a bridge collapse in 2012.