James Baker, a top FBI lawyer and confidante of former FBI director James Comey, resigned his position with the bureau on May 4, 2018.

Baker quit on the same day as controversial FBI lawyer, Lisa Page, whose political and sometimes anti Donald Trump texts with FBI agent Peter Strzok have raised questions of bias within the Robert Mueller investigation into the president. The upheaval at the FBI has social media buzzing about Jim Baker; Baker’s name has surfaced before because he was a recipient of one of the memos that Comey wrote after meeting with President Donald Trump.

It was also previously reported by Politico that Congress was interested in contact Baker allegedly had with a reporter who first broke the story on the infamous anti-Trump dossier, although that reporter denied Baker was the leak.

According to CNN, Baker “will be going to Lawfare, a national security blog affiliated with the Brookings Institution,” and a source said he left voluntarily and was unaware Page would be resigning the same day.

Who is James A. Baker?

1. Comey Called James Baker a ‘Great Public Servant’ But He Was Reassigned by Christopher Wray

Former FBI Director James Comey is sworn in while testifying before the Senate Intelligence Committee in the Hart Senate Office Building on Capitol Hill June 8, 2017 in Washington, DC.

James Comey, who has been a lightning rod figure since his handling of the Hillary Clinton email investigation, and continuing through his book disparaging the president, tweeted out kind words for Baker. According to The Post, Comey also worked with Baker at Bridgewater Associates, an investment management company.

“A great public servant retired from the FBI today,” Comey wrote on May 4, 2018 on his Twitter page. “Jim Baker’s integrity and commitment to the rule of law have benefitted our country through 5 presidents, of both parties. We are fortunate he and so many others choose to devote their lives to justice.

The previous tweet before that one was a defense by Comey of the FBI in light of comments by new Trump attorney Rudy Giuliani. “I know the New York FBI. There are no ‘stormtroopers’ there; just a group of people devoted to the rule of law and the truth. Our country would be better off if our leaders tried to be like them, rather than comparing them to Nazis,” Comey wrote.

Jim Baker was reassigned once Trump’s nominee Chris Wray took over the Bureau. “The FBI’s top lawyer, James Baker, is being reassigned — one of the first moves by new director Christopher A. Wray to assemble his own team of senior advisers as he tries to fend off accusations of politicization within the bureau,” The Washington Post reported in December 2017.

Baker was a recipient of a Comey memo involving his conversation with Trump.

The Comey memo that Baker received by email described a purported conversation with the president about unverified allegations involving Russian prostitutes in the infamous Christopher Steele dossier, which the president has denied.

New York Magazine reported that Comey kept Baker updated about his conversations with Trump, and Baker was listed in the article as an official who might be able to corroborate Comey’s accounts. “One senior law enforcement official familiar with the matter said that Comey specifically sought legal advice from Baker about when and how to tell the DOJ about Trump pressing Comey to shut down the Russia probe,” the magazine reported. 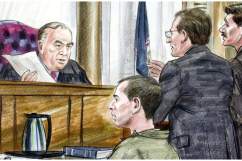 2. James Baker, Who Was Caught Up in a Leak Probe, Was Made the FBI’s General Counsel in 2014

In December 2017, The Washington Post reported that Baker had been caught up in a probe of alleged leaking in the FBI. Baker “had become caught up in what some law enforcement officials considered a particularly frustrating probe of a leak involving the FBI, the National Security Agency and stories that appeared about a year ago involving surveillance techniques for a particular email provider,” reported The Post.

Politico reported at that time that a Congressional leak investigation into Baker involved the infamous Steele dossier. “House Republicans are investigating contact between the FBI’s top lawyer and a Mother Jones reporter in the weeks before the left-leaning outlet” was first to break the story on the dossier, reported Politico, stating that “James Baker, the FBI’s general counsel, communicated with Mother Jones reporter David Corn in the weeks leading up to the November 2016 election.” However, Politico also reported that Corn denied Baker was the source for his reporting on the dossier.

It was later revealed that the Hillary Clinton campaign and DNC helped fund the dossier research through a law firm. The FBI authorized payments to Steele but then fired him for contacts with the news media, The Washington Times reported.

Comey, then FBI director, tapped James A. Baker to be the FBI’s general counsel in 2014, according to a press release put out by the FBI. The Post reported that he played a major role in many controversies, including “the FBI’s unsuccessful battle with Apple over the growing use of encryption in cellphones.”

“Jim’s experience as a career prosecutor and as a national security official, as well his experience in the private sector, make him an excellent fit for his new position here at the FBI,” Comey said in the news release.

Baker first joined the FBI in 1999. After “clerking for the Honorable Bernard A. Friedman in the U.S. District Court for the Eastern District of Michigan, Mr. Baker joined the Department of Justice (DOJ) with the Criminal Division through the Attorney General’s Honors Program in 1990 and worked as a federal prosecutor with the division’s Fraud Section,” the press release stated.

US Attorney General Alberto Gonzales takes questions from the press on November 22nd, 2005.

During his years at the bureau, Baker often handled legal issues relating to national security and intelligence gathering matters. A 2007 article in The Washington Post stated that Baker and another official said they “kept Attorney General Alberto R. Gonzales apprised of FBI violations of civil liberties and privacy safeguards in recent years.” Gonzales was the AG for President George W. Bush.

Gonzales had denied being aware of civil liberty violations, but Baker stated, “I have discussed and informed attorneys general, including this one, about mistakes the FBI has made or problems or violations or compliance incidents, however you want to refer to them,” according to The Post.

In 2006, the Post reported that some judges were upset about the use of NSA spy data and added that Baker “discovered in 2004 that the government’s failure to share information about its spying program had rendered useless a federal screening system that the judges had insisted upon…” and that led to the “temporary suspension of the NSA spying program.”

In 1996, “Mr. Baker joined the former Office of Intelligence Policy and Review (OIPR), which later became part of DOJ’s National Security Division. From 2001 to 2007, Mr. Baker served as counsel for intelligence policy and head of OIPR,” the FBI press release stated.

He then worked in academia and in the private sector – for Verizon – before returned to the FBI to work on cyber security matters.

“That same year, he became a fellow at the Institute of Politics at the John F. Kennedy School of Government at Harvard University and a lecturer at Harvard Law School,” the press release said. “From 2008 to 2009, Mr. Baker was assistant general counsel for national security at Verizon Business. He then returned to DOJ, and from 2009 to 2011, served as an associate deputy attorney general working on a range of national security issues, including cyber security.”

He has given testimony to Congress on the Patriot Act and how it helps investigators.

GettyThe seal of the F.B.I. hangs in the Flag Room at the bureau’s headquaters March 9, 2007 in Washington, DC.

Michigan Law School published an article about Baker’s career, in which he was quoted as saying, “Throughout my career, I’ve been extremely lucky to have a series of fascinating jobs that have been extremely rewarding. Being General Counsel for the FBI means I have to deal with all of the legal risks and issues that confront the entire FBI—everything from counterterrorism to civil rights, and all of the FBI’s priorities across the board.”

Baker explained why he kept choosing a career in government, telling Michigan Law, of his “desire to serve the country and to have a positive impact on the world” has led him to return to roles in government time and again.”