John Blackburn was a co-founder of the Red Hen in Lexington, Virginia, with Stephanie Wilkinson, but he is no longer an owner of the restaurant. Wilkinson had asked Sarah Huckabee Sanders to leave the restaurant on Friday night because she worked for President Donald Trump. Blackburn was not part of that decision. Here is what you need to know about Blackburn.

1. John Blackburn Named the Restaurant After the Children’s Book, ‘The Little Red Hen,’ But He’s No Longer a Co-Owner

The Red Hen is a quaint little restaurant in Virginia with a chapel-like design. John Blackburn, a native of Charlottesville and instructional technologist at Washington and Lee, fell in love with the building when he moved to Lexington in 1998, Virginia Living reported. He’s an environmental activist, and he and Stephanie Wilkinson opened the restaurant together. It was Blackburn who chose the name of the restaurant, based on his love for the children’s story The Little Red Hen. When turning the building into a restaurant, their goal was to work with the architect to preserve the building’s historic character while also making the building as sustainable as possible.

On its website, The Red Hen’s tag line reads: “Farm to table fine dining.” Founded in 2008, it was the first farm-to-table dining in Shenandoah Valley. The website reads: “Each day we create a new menu based on the freshest and tastiest produce and meat, whether it is a ribeye steak from cattle raised by the Potter family, who have been farming in nearby Collierstown for seven generations, or a beet risotto using vegetables from Rancho Calixto, a family farm founded by immigrants from Mexico. This dedication to local food means each dish preserves the intricate flavors of the land. It’s also good for the environment and our local economy.”

2. He’s the Founder of Pure Eats Lexington & Is the Assistant Director of Development at the University of Virginia

According to Blackburn’s Facebook profile, he’s the founder of Pure Eats Lexington, which he developed in 2011. According to their website, Pure Eats provides locally sourced food in a “fun, family-friendly atmosphere.” The restaurant sources its burgers from local providers such as Buffalo Creek Beef and Donald’s Meats. The restaurant also offers fresh-made doughnuts every morning, locally roasted coffee, Homestead Creamery milkshakes, local craft beer, and more.

When The Red Hen was founded in 2010, Virginia Living also reported that Blackburn has worked as an instructional technologist at Washington and Lee. (More specifically, he was the Assistant Director of University Computing and the Head of the Instructional Technology Group.) He’s now the Assistant Director of Development for the College Foundation of the University of Virginia, according to his LinkedIn profile.

Blackburn is highly interested in the outdoors. He’s the former and founding editor of Blue Ridge Outdoors Magazine, having worked there in 1996. He started the magazine while he was working on his master’s degree at UVA, Blue Ridge Outdoors reported. The magazine’s first year was “shoe string” he said. They had almost no money for photography, so he used his own photos. He wrote most of the copy because they had almost no money for freelancers. They worked in a windowless basement. “It didn’t feel very outdoorsy or glamorous or cool,” he admitted. He finished his master’s thesis while starting the magazine. When asked about major disasters during the first year, he said: “We had a typo on the cover of one of those early issues. On the cover! I missed it. Everybody missed it. It was demoralizing. I still have nightmares about it.”

He’s also an environmental activist, according to Virginia Living, and he was a journalist for the C-Ville Weekly in its early days.

He was also a field instructor for NOLS from 1994 to 1996. NOLS is a non-profit organization that teaches wilderness skills and leadership. According to the organization’s Facebook page: “The goal of a NOLS course is to give you the skills and leadership to take others into the backcountry comfortably and responsibly. At NOLS, we take people on real wilderness expeditions in remote areas. These aren’t guided tours: You won’t be sitting in a bus while the scenery is described to you over an intercom. You’ll be living in the backcountry, seeing it up close and in person.”

Blackburn has a Master of Arts in English Language and Literature/Letters from the University of Virginia.

4. An Employee of The Red Hen Said They Served Sanders for Two Minutes Before Wilkinson Asked Sanders To Leave, But She Wasn’t ‘Kicked Out’

An employee went on Facebook and said that they had only been serving Sarah Huckabee Sanders for about two minutes before she was asked to leave.

In response to Facebook questions, the employee said that there was no provocation and Sanders hadn’t done anything wrong, she was just told to leave.

The employee then said: “My owner threw her out because she didn’t want the mouthpiece of Trump to eat in her restaurant.”

The employee later edited their comments to clarify. “My owner asked her to leave and she complied. Her family left on their own accord, we didn’t actually refuse service or ‘kick her out.'”

Wilkinson later spoke with the Washington Post, confirming she was the person who asked Sanders to leave. According to the employee, Wilkinson asked them to leave “because the owner felt that Sarah’s moral decisions conflicted with her own…”

In an interview with The Washington Post, Wilkinson said the chef had informed her when Sanders arrived and said the staff was concerned. She was at home when the chef called her, and drove to The Red Hen to see for herself. The kitchen was preparing Sanders’ party’s main course. Wilkinson said several of their employees were gay and knew Sanders had defended President Donald Trump’s statements about banning transgender people from the military, and they were also all concerned about the immigration debate. Wilkinson said she asked her staff if they wanted her to ask Sanders to leave, and the staff said yes.

Wilkinson wanted to point out that Sanders had been served and not just refused service on sight. She said she asked Sanders to speak with her out on the patio. “I explained that hte restaurant has certain standards that I feel it has to uphold, such as honesty and compassion,” she told The Washington Post. She said Sanders immediately agreed to leave and even offered to pay, but Wilkinson said, “No. It’s on the house.”

5. A Restaurant in D.C. Has Gotten Mixed Up with The Red Hen in Lexington

Unfortunately, another restaurant has gotten mixed up with The Red Hen in Lexington. The Red Hen in DC has been receiving a lot of negative press and attention today, but this restaurant is NOT the restaurant that asked Huckabee Sanders to leave. They posted the following statement today to clarify:

Red Hen in DC is getting mixed up with Red Hen in VA, which kicked out Sarah Sanders. They had to send out an email clarifying. pic.twitter.com/9EVM6KOArP 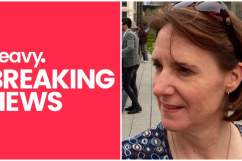 Stephanie Wilkinson, Owner of The Red Hen: 5 Fast Facts You Need to Know

Loading more stories
wpDiscuz
0
0
Would love your thoughts, please comment.x
()
x
| Reply
John Blackburn helped found The Red Hen, where Sarah Huckabee Sanders was asked to leave, but has not been a co-owner for years. He now owns another restaurant.