George O’Neill Jr., a Rockefeller heir, has now been confirmed as the “U.S. Person 2” mentioned in government affidavits describing a second contact that Maria (sometimes spelled Mariia) Butina was talking to within the United States, The Wall Street Journal reported. O’Neill hosted a dinner around the same time as the National Prayer Breakfast in 2017 that Butina attended. He has also commented in the past about improving relations between the United States and Russia. O’Neill has five children and once ran an anti-war website. He’s a self-professed artist.

1. George O’Neill Jr. is the Great-Grandson of John D. Rockefeller Jr. & He Had a Bitter Divorce with Former Wife Amy Whittlesey

George O’Neill Jr. is the great-grandson of John Dr. Rockefeller, Jr., Vanity Fair shared in a profile article written in 2000. He’s the oldest of the fifth generation of Rockefellers.  O’Neill’s mother is Abby “Mitzi” Milton O’Neill, who controlled the Rockefellers’ family investments and philanthropies, Vanity Fair reported. His father is George O’Neill, Sr. Abby passed away in 2017.

He and Amy Whittlesey O’Neill had five children when the Vanity Fair article was published during their divorce. Whittlesey was 22 when she and O’Neill, then 39, were married. Amy’s mother, Faith Ryan Whittlesey, was an ambassador to Switzerland during Ronald Reagan’s administration. She was the only woman on Reagan’s senior staff who had an office on the West Wing.

The divorce was intense, Vanity Fair reported, and included more than 200 hours of testimony and lasted more than 18 months. O’Neill wanted full custody of the children, and Whittlesey said that he had numerous affairs during their marriage (which he denied.) A judge even granted O’Neill’s request that Whittlesey pump breast milk and deliver it to him on the weekends so he could bond with their infant baby. Whittlesey told Vanity Fair that the marriage was so hard on her that she tried to commit suicide near the end of their relationship.

The O’Neills eventually reached a settlement in their divorce in May 2000, but the settlement was kept private. He agreed to let the children live primarily with Whittlesey in Delray Beach, but he would get frequent visitation. He also agreed to pay $10,000 a month in alimony and $5,800 a month in support for the children.

2. O’Neill Is an Artist, the Owner of a Classic Book Company, & Once Ran an Anti-War Website

Back in 2000 when Vanity Fair published its story about O’Neill’s divorce, the publication revealed that O’Neill was an artist. He was a sculptor and photographer who wanted to produce a book of portraits featuring American conservatives. He was also politically active, even back then. In fact, Whittlesey and O’Neill first hit it off during the inaugural ball for George W. Bush. But a former political colleague of O’Neill’s later told Vanity Fair that O’Neill seemed to find not having the Rockefeller name to be a detriment and “he certainly let you know, if you were a stranger, within 30 seconds.”

His bio currently lists him as Vice President of Meriwether Capital LLC, the Rockefeller’s investment firm. He was also a past chairman of the Rockford Institute, a conservative think tank.

He’s the owner of Lost Classics Book Company in Lake Wales, Florida. He started the company when he had trouble finding quality books for his homeschooled children. The company reprints books from the late 19th and early 20th centuries as “educational materials with the traditional values of earlier times.”

According to his bio for The ICCF Group, O’Neill is “is an artist, chairs Earth Materials Holdings, Earth Materials of Virginia, Highland Sand, and the Bettingen Corporation, and is a board member of the American Conservative Magazine.” Another bio adds that he is active in mining and real estate, and has also published children’s books.

He’s also listed in a bio as the founder of ComeHomeAmerica.us. The website doesn’t currently work, but you can view its archives online.  The website’s tagline reads: “Americans united in their alarm about the destructive consequences of our country’s runaway militarism.” It has articles written by numerous guest writers. The site lists O’Neill as the “co-chair.” Listed writers include Eric Garris, Bill Kauffman, Angela Keaton, Bonnie Kristian, Daniel McCarthy, Lewis McCrary, Coleen Rowley, Michael D. Ostrolenk, and John V. Walsh.

In April 2016, the site announced that it would no longer be providing regular updates.

On January 31, 2017, O’Neill hosted a four hour dinner for former and current Russian officials and U.S.Republicans and conservatives, ThinkProgress reported. Among the attendees were Rep. Dana Rohrabacher from California, Alexander Torshin, Butina, and Erickson.

O’Neill’s piece for The American Conservative discussed the dinner he organized with Russian officials and Republicans and conservatives. He said a number of prominent Republicans and conservatives attended, including a magazine publisher, journalists, and two Congressmen. He said it was just an opportunity for people to share views with prominent counterparts from another national capital. “It didn’t seem like a particularly newsworthy event,” he wrote. However, Time covered the event with skepticism, he added.

4. He Has Written About the Need for a Cooperative Relationship with Russia & a Greater Non-Interventionist Stance

O’Neill has been outspoken in his desire for conservatives to be more supportive of positive relations with Russia, but his outspokenness has also overflowed into a desire for more positive relations with most foreign countries. He wrote an article for The American Conservative in April 2017 titled: “Why Do We Want a Cooperative Relationship with Russia? What Time magazine doesn’t understand about the noninterventionist right.”

Traditionally, non-interventionism is simply a call to not create political alliances with other nations, but still keep diplomatic relations. The idea is that by not having alliances, you won’t be drawn into unnecessary wars. In fact, George Washington was a staunch non-interventionist and announced it as America’s official policy in 1796. Thomas Jefferson furthered this as his police in his 1801 inaugural address.

In O’Neill’s article for The American Conservative, he said that he wasn’t just concerned about “America’s bellicosity” toward Russia but its foreign policy in general. He said he felt compelled to write the article because Time magazine had covered his dinner with suspicion.

He wrote: “For me and many others on the right, Russia is not the main focus, but a component of years of effort to advance a more realistic and restrained U.S. foreign policy. Someone who is interested in such a foreign policy would naturally conclude that it is in the best interests of our country to have a good relationship, if possible, with any country that possesses the world’s second-largest nuclear arsenal.”

He went on to discuss America’s historical non-interventionist stance and how it changed over the years. “When America has ignored this sage advice (about not being the world’s police), the result has been many negative unintended consequences and costs far exceeding those anticipated or advertised. Imagine if George W. Bush had told us in 2001 he wanted to start a series of wars that would kill 6,000 Americans, wound tens of thousands more, kill hundreds of thousands of Middle Easterners, make millions homeless, totally destroy ancient cities, and wreck several countries. Add to that the expenditure of five to six trillion dollars, and after 16 years have more people committed to attack and destroy us than before, with no end in sight. Would anyone have agreed to such a disaster other than the neoconservatives?”

He suggested that a less bellicose relationship with Russia could also de-escalate tensions with Iran, lead to a negotiation in Syria, and other possible peace-related outcomes. At the end of his piece, he listed organizations that share his non-interventionist beliefs, along with Congressmen (including Sen. Rand Paul and Rep. Tulsi Gabbard), and writers who cover the importance of restrained foreign policy.

Interestingly, he just posted a followup story for The American Conservative on July 9, 2018, discussing what was then an upcoming summit between Trump and Putin.

5. ‘U.S. Person 2’ Communicated with Butina Multiple Times & Was Thanked for an Early 2017 Dinner

The Department of Justice complaint accused Maria Butina and Russian official Alexander Torshin of using ties with the NRA to get closer to Republican leadership. Butina was charged with conspiracy and acting covertly as a foreign agent to advance Russian interests, without notifying the U.S. Attorney General that was acting as a Russian agent. Affidavits and other government documents described Butina’s interactions with “U.S. Person 1” and “U.S. Person 2.” Neither has been named, but some sources believe Person 1 might be Paul Erickson.

U.S. Person 2 has not been identified.

The complaint, which you can read in full here, mentions U.S. Person 2 multiple times. According to the complaint, U.S. Person 2 is also a U.S. citizen who received emails from Butina in 2016 and 2017, while she was attempting to “arrange a series of dinners in the District of Columbia and New York City involving Russian nationals and U.S. persona having influence in American politics.”

Page 10 of the complaint addresses Person 2 again, starting with Number 27. The complaint says that on March 10-11, 2016, a series of emails were made between Butina, Person 1, and Person 2. In these emails, Person 1 gave Butina a list of individuals who would be “a good start for Maria’s first briefing” for the Russian official. Butina told Person 2 that the unnamed Russian official (possibly Torshin) was “very much impressed by you and expresses his great appreciation for what you are doing to restore relations between the two countries. He also wants you to know that Russians will support the efforts from our side. That is all I can tell you for now. More information next week!”

She then emailed Person 2 on March 14, 2016, and said the Russian official confirmed “his desire in our Russian-American project” and a representative of the Russian presidential administration had expressed approval “for building this communication channel.” She told Person 2 not to worry because “all that we needed is yes from Putin’s side. The rest is easier.”

She emailed Person 1 and Person 2 again on September 16, 2016, the complaint states. She talked about organizing another dinner in D.C. for October 2016 because “we only have 2 months left before the US elections and it’s the time for building an advisors team on Russia for a new president. I am seriously worry that the candidates some upcoming day will suddenly realize that ‘now’ is the time to do something with Russian and will look for advisory among currently popular radically oppositional to Russia crowd of experts. Bad things happen than. I believe we can prevent it.” [sic]

Person 2 doesn’t come up again until Page 14 of the complaint, when Butina emailed Person 1 on November 30, 2016, about the 2017 National Prayer Breakfast. She said people on the list were handpicked by the Russian official and were “VERY influential in Russia.” “Let’s think if  our [U.S. Person 2’s first name ] would like to meet with them…”

On February 8, 2017, she emailed Person 2 to thank him and said, “Our delegation cannot stop chatting about your wonderful dinner. My dearest President has received ‘the message’ about your group initiatives and your constructive and kind attention to the Russians.” 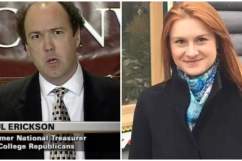