“We invented the modern world…White people are the best thing that ever happened to the world.”

– Columbia University student, who reportedly approached a group of students of color on campus last night for this tirade

On Saturday night, a student at Columbia University allegedly walked up to a group of students of color and unleashed a bizarre rant about race and history. The student has been identified, by one of the onlookers, as Julian von Abele, a physics student who specializes in quantum physics and mathematical physics.

On Saturday night, von Abele appeared to be drunk and was visibly swaying during his rant. The whole unsettling incident was filmed by one of the onlookers; you can watch it here. You can read more about Julian von Abele here.

The video opens with von Abele, wearing a blazer and a button down shirt, loudly proclaiming, “We invented the modern world.” He’s talking to a group of students of color; he himself seems to be traveling solo.

“Who?” someone asks him. “Europeans,” von Abele clarifies. (He doesn’t answer when someone asks, in mock surprise, whether he is European himself.)

Von Abele, his voice rising, continues, “we invented science and industry and you want to tell us to stop because oh my God, we’re so bad.” He goes on, “We saved billions of people from starvation. We built modern civilization.” You can hear the other students expressing shock. “Oh, my God,” one says. Another asks, “what about slavery?”

But von Abele keeps going, showing no sign of having heard the other students’ responses to his tirade. At this point he is screaming, swaying a bit, and waving his arms wildly. “White people are the best thing ever,” he yells. “I love myself and I love my people,” he yells, jumping up and down.

“Say it again,” urges one of the onlookers. “F*** yeah, white people,” von Abele yells. “We’re white people. We did everything. I don’t hate other people, I just love myself. I just love white men.”

It’s not clear what sparked this tirade, or why he suddenly addressed this group of students. But one Columbia undergraduate told a student newspaper that the incident started when a group of student, mainly African American, was crossing the campus late on Saturday night. They saw a young man (later identified as von Abele) approaching and heard him yelling, “I love white people, we are the best,” and “Trump is a great president.” That led to the conversation captured on video.

Von Abele allegedly approached another group of students and unleashed a similar rant later in the same night, according to the student newspaper. Campus security was called but ultimately said that nothing could be done about it, since von Abdle was simply expressing his opinions.

Columbia University later issued a statement denouncing what they called the “deeply disturbed racially charged incident.” The statement, signed by the deans of Columbia’s colleges, called the footage of von Abele “alarming” and said that the incident is under investigation by the Office of Student Conduct and Community Standards. You can read the full statement here. 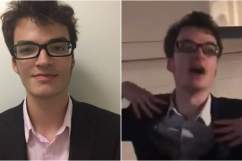 Loading more stories
wpDiscuz
0
0
Would love your thoughts, please comment.x
()
x
| Reply
On Saturday night, a student at Columbia University allegedly walked up to a group of students of color and unleashed a bizarre, racist rant.