A 37-year-old Texas homeowner fatally shot a police officer he mistook for an invader after police responded to his Midland home for a burglary alarm, authorities say. David Charles Wilson was arrested after the shooting and charged with manslaughter. The Midland Police Department officer, 27-year-old Hayden Heidelberg, died at a local hospital after life-saving efforts were unsuccessful, according to police.

Wilson, a married father of three and an oil company executive, told police he thought he was defending his million-dollar home from a burglar when he opened fire at Heidelberg and three other officers early Tuesday morning. Police responded to the alarm call about 1:15 a.m., according to dispatch records. Heidelberg was rushed to a hospital, but died about 2:20 a.m.

Wilson, through his attorney, has offered condolences to Heidelberg’s family. But he is arguing that the shooting was in self-defense. Wilson, the president and CEO of Midland-based Unitex Oil & Gas, was released from custody Tuesday and is free on bail as the investigation into the shooting continues.

Here’s what you need to know about David Wilson and the Midland shooting:

1. Wilson Fired Toward Heidelberg’s Flashlight, Hitting Him Above His Vest, Despite Officers Making a ‘Loud Announcement of Their Presence,’ Police Say

The home at 3306 Eagle Cove in Midland, Texas, where the shooting occurred.

The Midland Police Department responded to a call for an activated burglar alarm at 3306 Eagle Cove about 2:30 a.m. Tuesday, according to a press release. Officer Hayden Heidelberg arrived at the scene along with the probationary officer he was training and two other officers, police said. The four offices made a “loud announcement of their presence,” according to the police press release.

The homeowner, identified as David Wilson, then came upon the officers and opened fire. It is not clear how many shots he fired or what kind of gun he was using. Police said Wilson fired multiple shots toward the flashlight that Heidelberg was holding. A bullet hit Heidelberg in the area above his protective bullet-proof vest. He was taken to the hospital and died about 8:30 a.m., according to police.

According to an affidavit filed by the Midland District Attorney Laura Nodolf obtained by KOSA-TV, Heidelberg and his probationary officer arrived at the scene and walked around the home, not noticing anything out of the ordinary. Heidelberg then saw that the front door to the home appeared to be unlocked, according to the affidavit, and radioed back to dispatch as two other officers arrived to assist. One of the officers said he heard Heidelberg announce Midland Police were at the residence, according to the affidavit.

Texas Ranger Cody Allen interviewed David Wilson and he admitted he was inside the home and fired a gun in the direction of the officer, according to the affidavit. Allen said in the affidavit there was no evidence of anyone else firing toward the officers. Allen said he had probable cause to believe Wilson committed manslaughter by recklessly causing the death of Heidelberg.

It is not known if the officers were wearing body cameras or if other footage of the shooting exists. 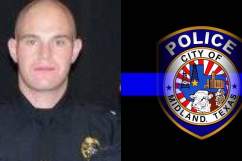 2. His Attorney Says His Client Thought His Family Was ‘Experiencing a Home Invasion’ & ‘Only Fired His Weapon to Protect His Family’

David Wilson’s attorney, Brian Carney, told KOSA-TV in a statement, “We would like to express our deepest sympathies to Officer Heidelberg’s family and the Midland Police Department for the events that lead to his death. We are cooperating with investigators to attempt to learn all the material facts as soon as possible.”

Carney added, “David Wilson believed that his family was experiencing a home invasion and only fired his weapon to protect his family.”

The investigation into the shooting is ongoing by the Texas Rangers. The mayor of Midland asked the city to come together for the fallen officer.

“I’m asking our community to come together today and this week to lift our fallen police officer, Officer Heidelberg, his family and the Midland Police Department family in prayer. This is a tragic loss for our community. I want to say thank you for all of the surrounding communities for their show of support,” Midland Mayor Jerry Morales said in a statement. “Our Midland families need to stand strong and lift each other up during this time of mourning. Please give your support and thanks to all of our public servants for all they do to protect our great city. As Mayor, I ask that all flags be flown at half-staff this week in remembrance of Officer Heidelberg and all those fallen in the line of duty.”

Officer Nathan Hayden Heidelberg joined the Midland Police Department in December 2014, according to a Facebook post from his swearing-in ceremony. He was sworn in along with seven other new Midland officers.

David Wilson is a Texas native, who was born in Wichita Falls and then moved with his family to Snyder when he was 11, according to a 2011 profile in Hart Energy. His father was operations manager for a company that was bought by Exxon Mobil and Wilson watched as the company drilled in the Dorward Field in Garza County, according to the profile. He also helped managed his father’s energy investments starting at age 17 and worked summers for his company.

“It inspired me to get into the industry. From the time the location was built until oil was in the tanks, it was an adventure,” he told Hart Energy. “I saw some of his investments had upside, and I saw the opportunity to be a bit more aggressive with it. I didn’t know how, what, where or when, but I knew I wanted to start my own oil company.”

Wilson moved to Ira, Texas, after high school with his high school sweetheart girlfriend, and now wife. He worked for a pump and supply company and went to junior college. Wilson then moved to Lubbock, Texas, to continue his education, but in 2003, at the age of 20, decided to start his own energy investment company, Unitex Oil & Gas. He remains the CEO and president of the company, now based in Midland.

Wilson and his wife have three young daughters, according to his wife’s now-deleted Facebook page.

In 2011, Wilson was named to the 30 under 30 list for the energy industry by Forbes. The magazine said about Wilson, “Bought first west Texas oil wells at age 20. Now has 250 wells producing some 450 bbl per day.”

According to the Unitex Oil & Gas website, it “is an upstream exploration and production company located in Midland, Texas, led by David Wilson. Since 2003, the company has been investing in and improving the production of conventional oil assets in the Permian Basin. In 2012, Ridgemont Equity Partners, a middle market buyout and growth equity firm, announced the formation of a new partnership with Unitex Oil and Gas’ management team and the closing of the partnership’s first acquisition of conventional oil assets in Scurry County, Texas.”

The website says, “David Wilson founded Unitex Oil & Gas to pursue an acquisition strategy of mature conventional oil assets in the Permian Basin.” Wilson is a Texas native, growing up in Wichita Falls and Snyder. In 2014, Wilson was named one of the top 10 young entrepreuners in oil and gas by Castagra. The website said, “Wilson bought his first west Texas oil wells at the ripe age of 20. Now in his early 30s he has over 250 wells producing about 450 bbl per day. The mission of his company is to ‘create significant value through the development and acquisition of conventional oil assets in the Permian Basin.’ And it seems like he is doing a fine job at conquering his goal.”

The home in Midland, Texas, where the shooting occurred.

David Charles Wilson and his wife purchased the home on Eagle Cove in Midland in 2017 for $1.125 million. The 6,985-square-foot home was built in 1997 and sits on 2.5 acres of land. Wilson and his family previously lived in another home in Midland for nearly 20 years before moving to their current home.

Details of what led to the alarm going off at the home and police responding are not yet clear. It is not known if Wilson was aware that police were en route to his house. Police have also not released details about where the officers were when Wilson opened fire on them, killing Officer Heidelberg.

Police have not commented beyond their initial press release and Wilson’s attorney has also not further discussed what the circumstances surrounding the shooting were.

David Wilson was booked into the Midland County jail Tuesday morning on a manslaughter charge. According to Texas state law, manslaughter is a second-degree felony that carries a potential sentence of 2 to 20 years in prison, along with fines of up to $10,000. Prosecutors must prove beyond a reasonable doubt that a person recklessly caused the death of another person for a manslaughter conviction to be returned.

It is not clear when Wilson is scheduled to appear in Midland County court for the first time. He has not commented about the shooting beyond the statement from his attorney on his behalf.

Officer Hayden Heidelberg is being mourned by the community and police in Midland and departments around Texas and the country.

“It is with the utmost sorrow that we acknowledge the passing of our family member. Officer Nathan Heidelberg, a five-year veteran of the Midland Police Department, represented the best in all of us. He was courageous, selfless, ethical and professional,” Midland Police Chief Seth Herman said in a statement. “Nathan treated others with respect, regardless of their demeanor or actions. He was a tireless public servant who devoted every ounce of energy to this profession, the citizens and his fellow officers. We have lost not only a great officer, but a loving brother and the most positive example of what we should all aspire to be. I wish I was more like Nathan.”

Heidelberg was a musician and played the guitar, according to Facebook posts. His friend, Stewart Aaron, wrote a tribute to Heidelberg on the police department’s Facebook page, “He was the true definition of a friend. Can’t believe he’s gone. Gonna miss those game nights, those long talks, busting out the acoustics.. so many memories… he was an old soul and would do anything for anyone.”

The Midland County Sheriff’s Office wrote on Facebook, “Our thoughts, love, support, condolences and prayers to our brothers and sisters with Midland Police Department. Please keep them in your prayers. Our heartfelt condolences to Officer Heidelberg’s family.”

First responders and members of the public lined the streets to salute the fallen officer as Heidelberg’s body was taken to the medical examiner’s office in Tarrant County.

Tributes and condolences to Heidelberg’s family and fellow officers poured in from police departments around Texas and the country. Heidelberg is the first Midland Police officer to die in the line of duty since 1966.

Hayden Heidelberg grew up in Midland, Texas, according to his social media profiles. Heidelberg was an uncle and several photos showed him playing with his niece and nephews. Friends and family members remembered him on Facebook as a great man who became a great police officer. Prior to becoming a police officer, Heidelberg graduated from Midland College in 2011.