July 20, 2019 is the 50th anniversary of the Apollo 11 moon landing, and over the past five decades, conspiracy theories have taken root about the lunar missions.

Neil Armstrong and Buzz Aldrin set foot on the moon. According to Fox News, “just 10 more NASA astronauts would follow in their footsteps by walking on the lunar surface. The last human to set foot on the Moon was Apollo 17 astronaut Eugene Cernan on Dec. 14, 1972.” The History Channel points out that conspiracy theories about the moon landing sprouted up after Americans lost trust in their government in the Watergate-era. They are also fueled by the fact that it’s been so long since we walked on the moon.

Footprints & Equipment on the Moon’s Surface

One of the key pieces of evidence debunking the conspiracy theory that the moon landing was a hoax: Footprints remain visible on the moon’s surface. According to BBC, the moon doesn’t have the atmospheric activity – such as rain and wind – that would have destroyed the footprints from moon mission astronauts.

BBC reports that the moon landing sites were captured photographically by Nasa’s Lunar Reconnaissance Orbiter, which has been in place since 2009. The British news site also reports that astronauts left equipment on the moon that is still there, including retroreflectors.

Radiation From the Van Allen Belts

A visitor pauses as he looks at the exhibit of one of the 12 Apollo Lunar Modules that was built for the moon-landing program August 31, 2012 at the Smithsonian National Air and Space Museum in Washington, DC.

Some people think the astronauts couldn’t have survived the “dangerous Van Allen radiation belts surrounding Earth,” according to EarthSky.org.

However, NASA has published a fact page about the belts. “Some people believe that the Apollo moon landings were a hoax because astronauts would have been instantly killed in the radiation belts,” the page says. “According to the US Occupation Safety and Health Agency (OSHA) a lethal radiation dosage is 300 Rads in one hour….Note: According to radiation dosimeters carried by Apollo astronauts, their total dosage for the entire trip to the moon and return was not more than 2 Rads over 6 day.” NASA explained that the astronauts didn’t face a lethal dosage of radiation. According to EarthSky, that’s in part because they traveled so fast through a path designed to minimize it.

“The total dosage for the trip is only 11.4 Rads in 52.8 minutes,” NASA wrote. “Because 52.8 minutes is equal to 0.88 hours, his is equal to a dosage of 11.4 Rads / 0.88 hours = 13 Rads in one hour, which is well below the 300 Rads in one hour that is considered to be lethal. Also, this radiation exposure would be for an astronaut outside the spacecraft during the transit through the belts. The radiation shielding inside the spacecraft cuts down the 13 Rads/hour exposure so that it is completely harmless.”

GettyAstronaut Edwin “Buzz” Aldrin poses next to the U.S. flag July 20, 1969 on the moon during the Apollo 11 mission.

Look closely at the above photo. Some people think it’s proof of a hoax because the flag seems to be waving in the wind, but there’s no wind on the moon.

However, according to The Independent, in actuality, the flag was “being held in place by a telescopic pole running through the top of the flag and it is crumpled as it had been screwed up for days en route to the moon.”

History.com reports that the flag wasn’t a normal one but was specially designed for the moon. It contained a horizontal rod but the astronauts “had trouble extending the rod all the way,” causing the waving effect.

Too Many People to Keep Quiet

It defies belief that the number of people who worked on the first moon landing mission (and the others too) could have kept it all quiet for 50 years.

As Fast Company points out, “More than 410,000 Americans worked on Apollo, on behalf of 20,000 companies. Was their work fake? Were they all in on the conspiracy?” Not to mention, the site points out, the even larger number of family members, any of whom could have spilled the beans.

The site also points out that the Soviets would have never kept a fraud that big quiet and notes that there are “thousands of hours of audio recordings—between spacecraft and mission control.” That would be a lot to fake.

If it was fake, where did the moon rock come from? According to The Guardian, some “382kg of moon rock” was “collected across six missions,” and the moon landing was verified by countries like Russian, Japan and China.

BBC reports that the moon rock has been tested, and it did indeed come from the surface of the moon.

One of the most popular lunar landing conspiracy theories holds that shadows in a picture of Neil Armstrong and another object on the moon are suspicious.

According to Royal Museum Greenwich, people are suspicious because the shadows are not parallel. However, the site spoke to an expert with an explanation. “This is on the surface of the Moon, but we can reproduce this effect any time we want to on Earth,” National Space Centre Discovery Director Profesor Anu Ojha explained to the site. “You have all seen this phenomenon yourself, where, because of perspective, parallel lines appear to be non-parallel. If you are trying to reduce on to a two-dimensional plane a three-dimensional situation, you can make lines do all sorts of weird things. Artists have been using this for centuries.”

The deployment of scientific experiments by Astronaut Edwin Aldrin Jr. is photographed by Astronaut Neil Armstrong. Man’s first landing on the Moon occurred July 20, 1969 as Lunar Module “Eagle” touched down gently on the Sea of Tranquility on the east side of the Moon.

Photos showing the astronauts on the moon don’t contain stars, which some people think proves it’s a hoax. However, according to RMG, it’s actually “daytime on the Moon,” and, thus, the camera shutter speed and aperture weren’t fast and small enough to capture “faint objects like stars.”

“All of the exposures of the astronauts on the moon are daylight exposures,” Rick Fienberg, the press officer for the American Astronomical Society, explained to History.com. “The surface was brightly illuminated [from the sun]. And the astronauts are wearing bright white space suits that are highly reflective.” 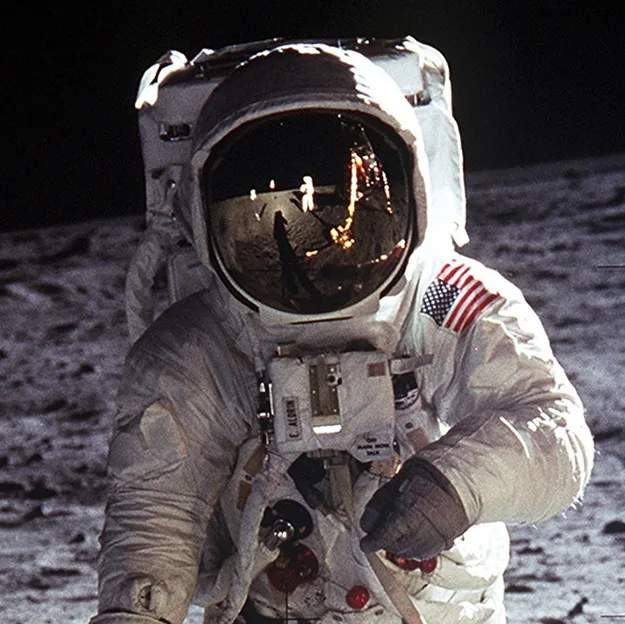 According to History.com, some people believe the moon landing is a hoax because you can’t see Neil Armstrong’s camera in a photo he took of Buzz Aldrin. However, the site reports that this is only because the camera was mounted to Armstrong’s suit.

Loading more stories
wpDiscuz
0
0
Would love your thoughts, please comment.x
()
x
| Reply
Some people believe the Apollo 11 moon landing was a hoax and faked. However, the moon landing conspiracy theories have been debunked.