Harvey Weinstein has been sentenced to 23 years in New York state prison after he was found guilty of criminal sexual act and third-degree rape by a jury in Manhattan. Weinstein, who was sentenced March 11, faced up to 29 years. The 67-year-old disgraced movie mogul, who has been accused of sexual assault by dozens of women, will be sentenced on March 11. He faces a mandatory minimum of five years in prison. Judge James Burke had revoked Weinstein’s $2 million bail and ordered that he immediately be taken into custody after he was found guilty on February 24.

Weinstein must serve at least 85 percent of his sentence before he can be released and will register as a sex offender, according to New York State law. He would be 87 in 2040 when he is eligible for parole.

Weinstein will appeal his conviction, his attorneys say. The jury of seven men and five women deliberated for five days and found Weinstein guilty of two of the five charges he faced. He was found not guilty of the most serious charges, including two counts of predatory sexual assault, which carried a potential sentence of up to life in prison. Weinstein’s attorneys asked for him to remain free on house arrest, but the judge denied that request. They say he has been battling many health issues. Weinstein was seen entering and exiting court during his trial with a walker.

Mimi Haleyi, one of Weinstein’s victims, testified during his sentencing, saying, “It takes a very special kind of evil to exploit connections to leverage rape. Rape is not just one moment of penetration. It is forever,” according to The Associated Press.

Weinstein addressed the court and said his “empathy has grown,” because of the situation, but still denied any wrongdoing. His attorneys had asked for a maximum of five years in prison. According to the AP, Weinstein told the court he is confused by #MeToo and the accusations against him, ” Thousands of men are losing due process. I’m worried about this country,” he said men are being accused of “things that none of us understood.” Weinstein added, “I’m totally confused. I think men are confused about these issues,” and said looking back he had, “wonderful times,” with his victims.

After the sentencing, Manhattan District Attorney Cy Vance issued a statement saying, “We thank the court for imposing a sentence that puts sexual predators and abusive partners in all segments of society on notice. We thank the survivors for their remarkable statements today and indescribable courage over the last two years. Harvey Weinstein deployed nothing less than an army of spies to keep them silent. But they refused to be silent, and they were heard. Their words took down a predator and put him behind bars, and gave hope to survivors of sexual violence all across the world.”

Weinstein has been held at the Rikers Island city jail in Manhattan. His attorneys have requested he be housed in an infirmary unit or in protective custody. He was taken to jail after spending time in a hospital. He is likely to be transferred to a state prison.

Attorneys Douglas Wigdor and Kevin Mintzer, who represent some of Weinstein’s victims, issued a statement after the sentencing:

While today’s sentencing closes one chapter in this saga, there are many other survivors seeking to hold Weinstein and his enablers accountable for their actions. The baton has now been passed from the Manhattan District Attorney to the New York Attorney General. It is time for her to step up and take the lead on this historic settlement negotiation. The Attorney General’s statement on Monday said that she was fighting for the best settlement possible in bankruptcy court. But the only entity in bankruptcy is The Weinstein Company. Harvey Weinstein is not in bankruptcy. Robert Weinstein is not in bankruptcy. Nor are the directors and officers of The Weinstein Company, Disney, and their billion-dollar insurance companies. Giving these people and companies a pass and taking millions of dollars out of the victims’ fund to pay defense lawyers is not a ‘fight,’ it is a surrender. Attorney General James did not run on a platform of selling out survivors. She needs to do the job she was elected to do. The Weinstein survivors deserve nothing less.

Vance said in a statement after the guilty verdict, “This is the new landscape for survivors of sexual assault in America, I believe, and it is a new day. It is a new day because Harvey Weinstein has finally been held accountable for crimes he committed. Weinstein is a vicious, serial sexual predator who used his power to threaten, rape, assault and trick, humiliate and silence his victims.”

Weinstein’s attorney, Donna Rotunno, said outside of court after he was found guilty, “Harvey is unbelievably strong. He took it like a man. He knows that we will continue to fight for him, and we know that this is not over.” Another attorney, Arthur Aidala, quoted Weinstein as telling his defense team, “I’m innocent. I’m innocent. I’m innocent. How could this happen in America.”

Weinstein, who was arrested in May 2018, still faces other legal issues. He was charged in January 2020 in Los Angeles with four counts of rape and sexual battery. If he is found guilty of the California charges, Weinstein could face up to 28 years in prison there.

Here’s what you need to know about what Weinstein faces at sentencing for the two charges he was convicted of:

The charge carries a mandatory minimum sentence of five years in prison and a maximum sentence of 25 years. He could also face fines and registration on the New York state sex offender registry, along with probation after his time behind bars.

The charge stems from Mimi Haleyi’s accusation that Weinstein of sexually assaulted her at his New York City apartment on July 10, 2006. Haleyi said Weinstein forced her to have oral sex during the incident. “He held me down on the bed and he forced himself on me orally,” Haleyi testified tearfully, according to The Washington Post. “I was on my period. I had a tampon in there … I was mortified.”

She added, “I just tried to reject him and push him away … And he would just pull me back and keep kissing and fondling me. I did reject him but he insisted.” 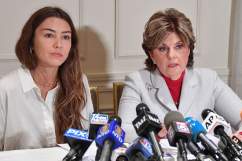 The third-degree rape charge is a Class E felony in New York that carries a potential sentence of up to four years in state prison. There is no mandatory minimum on the charge and Weinstein could be sentenced to probation and fines with no additional prison or jail time. The sentence would like be served at the same time as the criminal sexual act sentence.

Weinstein was convicted of raping actress Jessica Mann in a Manhattan hotel room in 2013.

READ NEXT: Sex Workers Warned About ‘Predator’ for Years Before His Arrest