On May 19, Jo Rae Perkins, a real estate agent and financial planner based in Albany, Oregon, won the GOP primary for the U.S. Senate race in Oregon. She won with nearly 50% of the vote, defeating three other Republican candidates, according to Ballotpedia. Perkins defines herself as a “Constitutional Conservative” and her campaign supports a number of right-wing issues, including an expanded border wall, gun rights, and the pro-life movement. On her campaign website, she claims she is against mandatory vaccinations and big federal government. According to the New York Times, Perkins insisted that she would not get the coronavirus vaccine, saying, “I don’t know what they are pumping me full of” and “I don’t want that crap.”

Perkins’s platform is also associated with the right-wing conspiracy theory, QAnon. On the day of the primary, Perkins uploaded a video to Twitter featuring a QAnon slogan, according to the National Review. In the video, she said, “I stand with Q and the team. Thank you Anons, and thank you patriots. And together, we can save our republic.” The video was taken down, but not before catching the attention of voters and media.

Despite Recent Efforts To Distance Her Campaign from QAnon, Perkins Reiterated Her Support for the Conspiracy Theory

Following her victory in the Republican primary and the subsequent media coverage, Perkins tweeted a press release blasting the media for “‘not doing their due diligence'” and claiming that, “‘less than 24 hours after my win, my words were already being spun through the fake news machine and taken out of context.'” It goes on, stating, “I do not believe everything from Q/Anon and would never describe myself as a follower, but I do not believe in infringing upon any outlet’s right to discuss news or topics.” The press release concludes, “‘Now on to the real issues that matter!'”

The following day, Perkins appeared on ABC News and directly contradicted the press release, claiming that she was, “literally physically in tears” after reading her statement. “I scanned it and said, yeah, it looks good to me and out it went. And then I saw it afterwards and I am like, literally was in tears, literally physically in tears because I’m so blown away. Because I went, crap, that’s not me. And I don’t back down.” She continued, “I’m not backpedaling and I’m frustrated. I feel like I’m having to backpedal and that’s like torn me up because that’s not me.”

Like clockwork, liberal media pounces. Our grassroots support pushed us to a near 20-point win & victory in every single county. Of course they don’t want to cover that! Read my statement & join the team today. pic.twitter.com/zpSn5VJ3iu

The press release was still available on Perkins’s Twitter feed as of Saturday morning despite her claims that the content is not an accurate reflection of her beliefs.

In Response to QAnon, the FBI Issued a Warning About Conspiracy-Motivated Crime in 2019 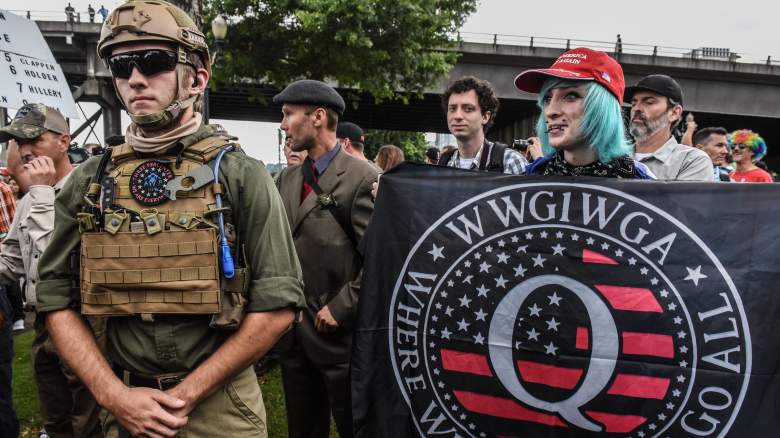 Getty A demonstrator holds a banner referring to the QAnon conspiracy theory during an alt-right rally on August 17, 2019 in Portland, Oregon.

The QAnon conspiracy first appeared on the online message board 4chan in 2017. To paraphrase from the Atlantic’s “QAnon Is a New American Religion,” the conspiracy alleges that a “deep state” of political and military agents abuses its considerable influence to prop up a cabal of global elites who commit unspeakable crimes like underage sex trafficking. Conspiracy theorists believe that Donald Trump is a hero and mastermind working to destroy the deep state and bring about an end to these crimes. These ideas originate in part from an anonymous figure called “Q” who periodically leaves clues about the conspiracy on the internet.

In her interview with ABC News, Perkins refutes the comparison between QAnon and religious fanaticism, saying, “How do I say this? Some people think that I follow Q like I follow Jesus. Q is the information and I stand with the information resource.”

According to the New York Times, QAnon conspiracy theorists embrace a wide range of politically-based stories, including the belief that the Mueller investigation would end with the arrest of high-profile Democrats and that President John F. Kennedy faked his death and now posts online as Q. In May 2019, the FBI released information warning that fringe political conspiracy theories “were very likely to motivate domestic extremists to commit criminal, sometimes violent activity (sic).” According to the Hill, the FBI specifically pointed to QAnon and Pizzagate, a conspiracy theory claiming that the Clinton family was part of an elaborate sex trafficking ring. In 2016, a man fired a gun in Comet Ping Pong, a pizza place in D.C., and claimed he was there to investigate the Pizzagate conspiracy, the Hill reported.

Perkins is Running Against Two-Term Incumbent Sen. Jeff Merkley in the General Election in November

Perkins is running for the seat of Sen. Jeff Merkley, a two-term senator seeking reelection in the fall. Before running for the U.S. Senate, Merkley was the Speaker of the Oregon House of Representatives. In November 2019, 538 labeled the seat “Safe [Democrat]” by a margin of at least eight points in the upcoming election. Perkins describes her opponent as a “career politician.” This is her fourth time running for an Oregon seat in the U.S. Senate.

In an interview with the New York Times, Jim Pasero, a political consultant and former speechwriter for the Republican National Convention, attributes the rise of fringe Republican candidates in Oregon to the wave of Democratic fervor that has swept through the state, warding off mainstream Republican candidates and creating a conservative vacuum where fringe ideas have their day in the sun.

READ NEXT: Study Finds 36,000 Lives May Have Been Saved if Social Distancing Measures Were Introduced One Week Earlier in U.S.