Friday, June 5 marks Breonna Taylor’s birthday. She would have turned 27 years old today, and people around the world are honoring the late EMT with celebrations of her life, and demands that the police officers who killed her are brought to justice. Several months after three officers barged into her house with a “no-knock” warrant and shot Taylor eight times in her own bed, where are the officers in question? What has developed with Sgt. Jonathan Mattingly, and detectives Myles Cosgrove and Brett Hankison since that night?

None of the officers have been charged with any crime related to Taylor’s death. They are still on paid administrative leave.

Myles Cosgrove, Jonathan Mattingly, & Brett Hankison Have Been on Paid Administrative Leave Since May 19 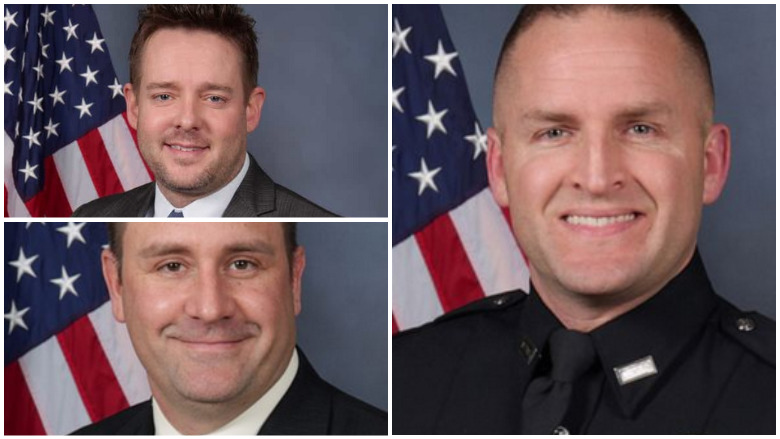 Though the FBI has reopened Taylor’s case, no arrests have been made for Mattingly, Hankison, or Cosgrove yet. They have been on paid administrative leave for over two weeks now.

As for Taylor’s boyfriend, Kenneth Walker, he was initially charged with attempted murder, for shooting Mattingly in the thigh when the officers barged into Taylor’s apartment. Walker claimed he had no idea who the officers were, since they were in plainclothes, and was acting in self defense. Neither Walker nor Taylor had a criminal record.

The charges against Walker have since been dropped.

His lawyer, Rob Eggert, did confirm that Walker plans to “resume his life” now. He has given very few public statements about his experience or opinion on what transpired.

Calls for the Arrests of Hankison, Mattingly, & Cosgrove Are Gaining Momentum

Now, calls for the arrests of Mattingly, Hankison, and Cosgrove are growing. A Change.org petition demanding these arrests has received over 3 million signatures and counting; one freelance writer, Cate Young, has organized a mass letter-writing campaign, asking people to send birthday cards for Taylor to the officials in charge of the case, demanding these officers are arrested and charged with her murder.

“I had just been feeling kind of frustrated with how quickly Breonna’s name had fallen out of the news cycle. I think with the protests that have been happening in George Floyd’s name, it kind of got really easy and convenient to forget her… But having been paying attention to the news for the last seven or eight years, I’ve seen this kind of thing happen over and over again, where we enter these periods of increased attention to police brutality against black people, black women are among that number, and those black women’s names just stop coming up in stories.”

Loading more stories
wpDiscuz
0
0
Would love your thoughts, please comment.x
()
x
| Reply
Breonna Taylor’s death inspired national outrage, but it hasn’t led to any arrests. Here’s the latest on the three officers involved in her death.