Coleman Thomas Blevins is a Texas man accused of plotting a Walmart mass shooting. Blevins was arrested with guns and white supremacist and other extremist paraphernalia, the Kerr County Sheriff says. The 28-year-old was arrested on May 28, 2021, the sheriff’s office said in a May 30 press release.

The sheriff’s office said it and other agencies disrupted “plans for a mass casualty event,” and cooperated to “intercept and foil plan for attack on public.” Investigators believe Blevins was a “threat to national security,” according to the press release.

“Through the period of investigation, KCSO investigators made contact and conversed with Mr. Blevins, confirmed his affiliation and networking with extremist ideologies. On May 27th, KCSO Special Operations Division intercepted a message indicating that Blevins was preparing to proceed with a mass shooting. In the message, Mr. Blevins made a specific threat that included Wal-Mart. Working with the FBI, KCSO Investigators confirmed Mr. Blevins’ capability of following through with the threat and moved immediately to arrest him,” the sheriff’s office said in the press release.

Blevins, who lives in Kerrville, Texas, was arrested in the 1000 block of Junciton Highway by deputies from the sheriff’s office along with representatives of the Texas Department of Public Safety, the Kerrville Police Department, the FBI and the U.S. Secret Service, according to the press release. Officials said Blevins was on felony probation and barred from possession firearms.

Here’s what you need to know about Coleman Thomas Blevins:

“After the arrest, a search warrant for Mr. Blevins’ residence in the 200 block of Spence St was executed. In that warrant service, firearms, ammunition, electronic evidence, concentrated THC, and radical ideology paraphernalia, including books, flags, and handwritten documents were seized. Mr. Blevins is currently on active felony probation and is prohibited from possessing firearms,” the Kerr County Sheriff’s Office said in the press release.

A photo posted by the sheriff’s office, which can be seen above, shows the items that were seized from Blevins’ home. The flags seen in the photos include, from left to right, a Neo-Nazi astany black sun flag sonnenrad banner, a confederate flag, the flag of the Kingdom of Saudi Arabia and the Falange Flag, a symbol of the fascist Falangist party of Spanish General Francisco Franco. Another flag on the table is the calvary cross version of the Russian Christian Orthodox symbol.

Along with a rifle, handgun, ammunition, a laptop and a T-shirt with the image of a syringe, several books are laid out on the table, including a copy of the Qu’ran and the white supremacist novel The Turner Diaries. The 1978 nove depicts a “group of white supremacists attacks the Capitol in an effort to overthrow the U.S. government. Dozens are killed in the assault, including members of Congress and their staffers. But in the insurrectionists’ view, the greater victory is symbolic,” according to The New York Times.

Also on the table are copies of Revolt Against the Modern World by Julius Evola and Harassment Architecture by Mike Ma. An unidentified red book also sits on the table.

The sheriff’s office did not immediately respond to a request for comment for more information on the materials found during the search of Blevins’ home, including an inventory of everything that was seized. 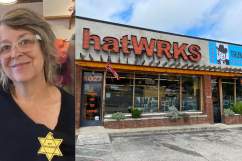 2. Blevins Was Sentenced to 10 Years of Probation When He Pleaded Guilty to Felony Drug Charges in 2016

Texas DPSColeman Blevins pictured in mugshots from 2015 and 2016.

Blevins has three drug convictions on his record, according to Texas Department of Public Safety records obtained by Heavy. He was arrested in August 2014 by the Alpine Police Department and charged with manufacturing and delivery of a controlled substance greater than 4 grams. He pleaded guilty to the charge in September 2016 and was sentenced in December 2016 to 10 years of probation.

While free on bail in that case, Blevins was arrested by the Brewster County Sheriff’s Office in Alpine in June 2015 and charged with possession of greater than 1 gram of a controlled substance, a state jail felony. He also pleaded guilty to that charge in September 2016 and was sentenced in December 2016 to 10 years of probation that runs concurrent to the probation in the other case. According to News West 9, his 2015 arrest came duirng a stop for a traffic violation. During the traffic stop, deputies found heroin, according to the report.

Blevins was also arrested in July 2016 by the Alpine Police Department on a drug charge. That case was also wrapped in with the other three in his guilty plea in September 2016 and he was sentenced to 10 years of probation in December 2016 on that charge as well.

3. Blevins, Who Was Charged With Making a Terroristic Threat, Could Also Face Federal Charges

Texas DPSColeman Thomas Blevins pictured in mugshots from 2015 and 2016.

Blevins was arrested on a warrant charging him with making a terroristic threat to create public fear of serious bodily injury. According to Texas state law, the charge is third-degree felony.

The charge carries a potential sentence of 2 to 10 years in state prison and a fine of up to $10,000, according to Texas law.

The sheriff’s office said, “The FBI or other federal authorities may seek federal charges in this case. As with all criminal cases, charges may be added or modified prior to trial. Defendants are presumed innocent until proven guilty.”

Blevins is being held on $250,000 bail at the Kerr County Jail, the sheriff’s office said in the press release. He is originally from Alpine, Texas, according to public records.

Little other information about Blevins could be uncovered by Heavy. No Facebook or other social media pages in his name could be found.

Blevins could not be reached for comment by Heavy and it was not immediately clear if he has hired an attorney who could speak on his behalf. It was also not immediately known when Blevins is scheduled to appear in Kerr County court. 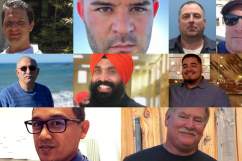 These Are the Victims of the San Jose Rail Yard Shooting

5. Kerr County Sheriff Larry Leitha Said, ‘Many Think That Can’t Happen Here, & It Was Well on the Way to Happening’

“Stay vigilant, Kerr County. Our Office, other local law enforcement departments, and federal law enforcement work every day to keep our community safe. You can help by always being aware. If you see something, say something,” the sheriff’s office wrote on Facebook. According to the press release, the KCSO’s Special Operations Division was assisted in the investigation by the Texas Department of Public Safety Criminal Investigation Division and the FBI.

Sheriff Larry Leitha said in a statement, “This case reminds us that we need to always be vigilant. Many think ‘that can’t happen here’, and it was well on the way to happening. Our investigators did outstanding work in this case, and possibly saved many lives. The plot interrupted in this case is unthinkable. We appreciate the assistance of all our law enforcement partners, including the FBI, DPS, KPD, and Secret Service. We’d like to remind the public – if you see something, say something. The KCSO, working with other law enforcement professionals, will continue to stop threats to our community, and bring those responsible to prosecution.”