OnScene TV The scene of a deadly shooting at a convenience store on Meadowglen Lane in Houston on November 15, 2021.

A 26-year-old Houston man was shot and killed during an argument in a convenience store parking lot on Monday, November 15, 2021, police say. The shooter fled from the scene, according to police. Video showed several officers investigating outside of the store on Meadowglen Lane just after 9:40 p.m. on Monday.

William Smith was killed in the shooting, the Houston Police said in a press release. Police added, “Officers responded to a reported shooting at the above address and found Mr. Smith lying in a convenience store parking lot. Further investigation determined Smith had argued briefly with a Black male suspect before the suspect shot him multiple times and then fled in a four-door sedan.” Police said they are not sure what the argument was about.

Jahleel Kirksey, 23, was charged with murder on November 17, 2021, according to a Houston Police press release. The charges were filed in 183rd State District Court, police said. Investigators said the suspect fled from the scene in a gold sedan.

She added, “We’re not really exactly sure what the argument was about or disagreement was about. But just based on the video surveillance and the body language of the individuals it seems like there was some kind of disagreement. From what we could see there was no physical fight.” 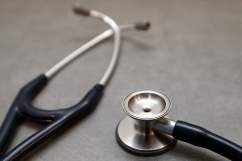 OnScene TVThe scene of a deadly shooting at a convenience store on Meadowglen Lane in Houston on November 15, 2021.

The deadly shooting is being investigated by Houston Police Department Homicide Division Detectives L. Kauffman and A. Hernandez, according to the police press release. Police said, “Anyone with information in this case is urged to contact the HPD Homicide Division at 713-308-3600 or Crime Stoppers at 713-222-TIPS.”

The Meadowglen Lane convenience store was also the scene of a shooting on January 1, 2021, according to a Houston Police press release from the time. A 45-year-old man, Trevin Parchman, was shot and critically wounded.

“Officers responded to a shooting call in a strip center parking lot at the above address and were advised an unknown suspect walked up to Mr. Parchman and shot him once in the groin area. The suspect then fled the scene before officers arrived. Witnesses heard the gunshot, ran to assist Parchman, and called 911. Paramedics transported him to the hospital,” Houston Police said. That shooting also remains under investigation.