Mata was subsequently arrested in September 2020, charged with her murder and held in California while awaiting extradition to Florida.

Mata attempted suicide by stabbing himself in the femoral artery in late September, according to local news channel KION; he died from his injuries on October 20.

1. Mata Worked as a Nurse for Over a Decade

Wife of Watsonville man accused of murder in Florida defends his innocenceRaul Mata is under arrest and accused of killing his step-daughter in Miami in September 2004. His wife told Action News “I'm aware of his past and there's never been a doubt in my mind about his character and he's 1,000 percent innocent. He's been a nurse in our community for the past 15 years…2020-09-25T06:34:08Z

Mata was married to a Miami woman named Delcia Oliva in 2004 and was the stepfather of Oliva’s teenage daughter, Dilcia Mejia, according to an article from Media Entertainment Arts WorldWide (MEAWW).

According to a 2004 story published in The Miami Herald, Mejia was described as the daughter of Honduran immigrants. She was described as focused, sensitive and protective of her dog Rocko. Her aunt, Vilma Iriate, described her as a “happy, sensitive girl.” Her ex-boyfriend at the time, Richard Gonzalez, said of Mejia, “She was such a sensitive person. If she saw a movie and it was sad, she cried.”

After Mejia’s death, Mata and Oliva broke up and Mata moved to Watsonville, California, where he worked at Watsonville Community Hospital as a nurse, news station KSBW-8 reported. He also got married and had a son, according to The Miami Herald.

After his arrest in September 2020, Mata’s current wife told KSBW-8, “I’m aware of his past and there’s never been a doubt in my mind about his character and he’s 1,000 percent innocent. He’s been a nurse in our community for the past 15 years saving lives in the emergency room. He’s an incredible person and he doesn’t deserve this. The truth will prevail.” 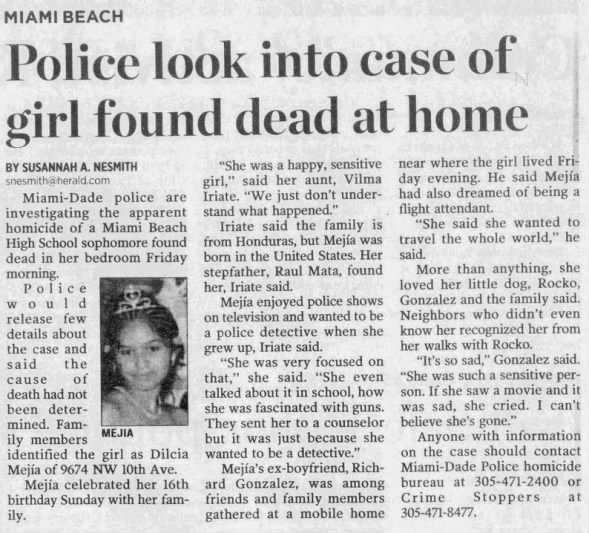 The Miami Herald reported that Dilcia Mejia, a 16-year-old Miami Beach high school sophomore and Mata’s stepdaughter, was found dead in her bedroom with her throat slit on September 17, 2004. She was “found” that morning by her stepfather, who called 911.

During that call, Mata said, “We need someone to come here. My daughter. My daughter. Somebody killed my daughter,” according to The Miami Herald.

The Herald reported that the home, a mobile home located in the Colonial Acres mobile home park, was not ransacked, nothing was removed from it and there were no signs of forced entry.

The Miami Herald reported that at the time, Mata had a “significant amount of scratches and bruises” on his left forearm and inner bicep as well as swelling on his right thumb. When interviewed, Mata described his relationship with Mejia as “strained,” said that she had a “dislike for him” and called her a liar instead of showing sadness about her death.

In 2004, The Herald reported that Mejia had just turned 16, was “a good student who stayed out of trouble” and was trying to decide between a career as “a flight attendant or police detective.” In another 2004 story published in The Herald, Gonzalez said of his ex-girlfriend, “She said she wanted to travel the whole world,” adding, “I can’t believe she’s gone.”

In 2015, Mejia’s mother said, “I think about her all the time. The first few years were so difficult for me. I thought I was going to die. Every time when I go somewhere I remember her,” the South Florida Sun-Sentinel reported.

NEW: Stepfather arrested in 2004 murder of Miami Beach High student Dilcia Mejia, whose throat was slit in her bedroom.

According to a Miami-Dade Police Department press release:

Investigators, working closely with the Forensic Services Bureau, used DNA obtained from the victim’s body, that led to a positive match identifying Raul Mata as the primary suspect in the case. Due to the forensic advancements in DNA technology, and their determined efforts, investigators linked physical and circumstantial evidence, successfully solving the case.

People magazine reported that the circumstantial evidence contained in the arrest affidavit for Mata included accusations of inappropriate sexual behavior from Mata. “Dilcia had told a school counselor that Mata had made inappropriate sexual advances toward her,” the magazine reported. MEAWW also reported that the arrest affidavit revealed that a school counselor was planning on telling Mejia’s mother about the accusations.

Heavy has requested documents related to this case from the Miami-Dade Police Department and will update the store if they are received.

4. Mata Was Arrested & Accused of Killing His Stepdaughter

Raul Mata Charged With 1st-Degree Murder In Death Of Stepdaughter Dilcia MejiaCBS4's Peter D'Oench shares the details of the arrest.2020-09-24T21:37:53Z

Mata was arrested on September 17, 2020, at 9 a.m., according to a press release from the Miami-Dade Police Department — 16 years to the day after he called 911 to report Mejia’s death. He was charged with first-degree murder with a deadly weapon.

“This individual had established a whole new life in California, was remarried (and) had a child. So you can see that this individual didn’t have a conscience. Because this individual just pretty much went on with his life, living a normal life,” Aguiar told reporters in September 2020, according to People.

While Dilcia’s life was tragically ended, for the next 16 years Mr. Mata went on to live his life thinking that he got away with this despicable crime. Unfortunately for Mr. Mata the Miami-Dade Police Department never forgets its victims and through tenacious and resilient police work by our Homicide Cold Case detectives, our forensic lab personnel, and our State Attorney’s Office, we were able to bring him to justice in the name of Dilcia and her family.

At a press conference, Mejia’s cousin, Trinidad Gonzalez, said, “It’s horrific. What he did, I don’t know why. She was just innocent, you know? Why would he do that?” according to the South Florida Sun-Sentinel. Gonzalez also said, “This is just the biggest relief that our family has had. It’s like a huge burden lifted from our shoulders.”

Mata was facing a life sentence and possible capital punishment if found guilty of the charge on which he was arrested.

Raul Mata, who was awaiting extradition to Miami to stand trial for allegedly slicing the throat of 16-year-old Dilcia Mejia inside a North Miami-Dade trailer home, died more than three weeks after he stabbed himself in the groin inside a California jail. https://t.co/V68yPLmrnV

The Santa Cruz Sentinel reported that Mata was being held at the Santa Cruz County Main Jail after his arrest. Mata, according to prison officials, injured himself while he was awaiting extradition back to Florida.

The Miami Herald reported that Mata used “a portion of a pen” to stab himself in the femoral artery, which, according to EMS World, can lose one liter of blood per minute if cut.

According to the Sentinel, Mata wounded himself in the “left groin area” at around 2 a.m. on September 28 and was taken to a hospital for treatment that same day. A release from the jail stated, “The Corrections Officer and jail medical staff began life-saving measures until medics arrived. The inmate was transported to a hospital where they are currently being treated.”

Mata died from complications related to the injury on October 20, the Sentinel reported.

Read More
California, Crime, Florida, Jail, Miami, Murder, Prison, Suicide
Raul Mata was arrested in September 2020 and charged with his stepdaughter's 2004 murder. He stabbed himself with a pen while in jail and subsequently died.