Gamers have waited far too long to play the next grand adventure in the life of everyone’s favorite witcher, Geralt of Rivia. On May 19, 2015, we’re all finally going to get our hands on The Witcher 3: Wild Hunt.

Although we’ve had to wait for this release due to several delays, it’s going to be all the sweeter once we all get to experience the final product. You can expect to get involved in a massive new world, engage with important NPC’s, make heavy decisions and play through hundreds of hours of content. And one of the cooler aspects of this sequel? Geralt isn’t the only character you’ll get to control this time around.

Here’s everything you need to know about The Witcher 3: Wild Hunt.

1. The Witcher 3: Wild Hunt Focuses on Discovering a Child Tied to a Grand Prophecy

Geralt’s main mission in the world of Wild Hunt entails locating a child of prophecy. This young girl is described as “an ashen-haired, a living and highly volatile weapon everyone wants to control.” What makes her so important is what flows through her veins – her Elder Blood that’s said to be dangerous enough to bring on the end of the world.

While Geralt is looking to track down this important person, he also has to contend with a new army known as the Wild Hunt. They invade the Northern Kingdoms and leave nothing but bloodshed and destruction in their wake. Geralt’s Witcher profession seems to be the key to taking them down.

2. The World of The Witcher 3: Wild Hunt is Way More Larger Than the Series’ Last Two Games

The in-game world of The Witcher: Wild Hunt has been officially described as being 30 times larger than the last two games. Geralt will have to make his way throughout the world by utilizing his own horse and a sailboat to discover far-off locations. Fast traveling has been included, so adventurers will have an easier time venturing to past villages and forts.

The game’s official website describes the types of regions you’ll come across:

In Wild Hunt you’ll visit the high streets and back alleys of Novigrad, a gilded metropolis with a rotten heart where all cultures and classes rub shoulders, face the frigid cold of the wind-swept Skellige Isles, and challenge the dark forces roaming the desolate, war-ravaged swamps of No Man’s Land. As you traverse distinct regions, you’ll feel and see the world change. You’ll hear the change on people’s lips, too: in Skellige battle-hardened marauders will shout boasts of their latest raids, in Novigrad rich and poor will gossip about executions and houses of pleasure, while in No Man’s Land, villagers will pray in hushed whispers to dark, ancient gods. 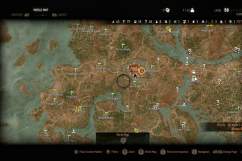 3. The Game’s Run Time is Epic

The developers behind The Witcher 3: Wild Hunt, CD Projekt RED, let it be known that it will take up to 100 hours to fully complete it. 50 of those hours have been set aside to the main storyline, while the other 50 hours has been put towards the side missions.

4. Geralt Has Access to a Wide Variety of Abilities

Geralt not only brings along the abilities he utilized in his past adventures, he’ll make good use of a few new ones. He’ll be able to use a new power called “witcher-sense,” which allows him to find important waypoints and other items hidden in the environment.

Geralt can also do battle while on horseback, fight underwater, swim and use a crossbow. Item creation and potion brewing returns, plus 10 witcher sings will be available for use (five original signs, with each sign having an alternate form).

5. Geralt Can Get Involved in Monster Hunts

Since the reveal of this sequel, fans have gotten a preview of Geralt getting involved in monster hunting. The Witcher 3’s official website offered up a synopsis on how this activity plays out:

Geralt is a bounty hunter, an apex predator in a world gone wrong. In a monster-infested world he is a necessary counter-balance. His main task is to eliminate creatures that pose a threat to society. Hunting monsters is his business — and there’s always plenty of work. Monsters come in all shapes and sizes, and while some are members of broader species, others are one -of-a-kind. To face the latter, extremely powerful or clever creatures, you’ll embark on special quests to learn about their fighting style and behavior.

The monster threat is real and strong. Along your path you’ll encounter entire areas overrun by beasts, the humans and nonhumans who once lived there gone. Should you decide to risk death, your job will be to exterminate every last pest and render these places safe once more. Succeed and you’ll see folk return, more than eager to craft and sell you rare, enhanced gear.