Pokemon Go players are used to the Grimer bug, but now there’s a new one connected to Ivysaur. Trainers are reporting that if you load Ivysaur’s 3D model in the app, parts of the game will freeze or quit working. Sometimes the problem will start if the Ivysaur just shows up in the game, and it can get so bad that the game will stop working completely. What’s going on? Are there any fixes?

The Ivysaur Bug Typically Kicks In When You Load the Pokemon’s 3D Model, But It Can Happen at Other Times Too

Once you have Ivysaur in your Pokedox and click on the Pokemon to load its 3D model, that’s when the problem typically kicks in. On Reddit, yuvi3000 from South Africa described the problem in detail. After you load the Ivysaur’s 3D model, the game may stop loading all Pokemons’ graphics in the Pokedex. If you try clicking a wild Pokemon while the bug is affecting your game, then the app might crash completely, loading what yuvi3000 refers to as the “white screen of death.”

Some users are reporting that the issue activates at other times too, such as if you see an Ivysaur in the wild or if you accidentally view an Ivysaur in a gym.

The bug can expand beyond hiding Pokemon that you see from the Pokedex. In some cases, you might not be able to see Pokemon in the wild at all, in gyms, or even after hatching an egg once the Ivysaur bug kicks in. The video above shows an example of how bad the bug can get.

The Bug Is Affecting Android Users the Most

Many players are reporting problems from countless mobile devices, including Blackberry, HTC, Lenovo, Huawei, LG, Motorola, Oneplus, Redmi, Samsung, Sony Xperia, ZTA, Vernee. At the moment, the problem appears to be limited to Android devices. You can see the complete list of affected models, as reported by Pokemon Go players, here.

The Bug May Also Happen with Other Pokemon

Here’s what it looks like when your Ivysaur disappears. (Reddit/Tyrant-Spyke)

Although the bug is most prominent with Ivysaur, some Pokemon Go players have also reported seeing it with Horsea, Charmander, and Caterpie.

Interestingly, some players are reporting that if they try to view their Ivysaur before trying to view Grimer, they’ll end up with the invisible Pokemon problem, but Grimer will not crash their game. So it looks like one bug may inadvertently fix another bug, although neither problem is a good one to have.

Fixing the Issue May Require Reinstalling the Game

Some people are able to close out of the game and restart it to fix the issue. But others are finding the bug is persisting. If you encounter the bug, first try force closing the app and logging out of the game. If it persists, you can try restarting your phone or clearing the RAM. For some players, though, they have to go so far as to uninstall and reinstall the game before they can get rid of the bug.

Unfortunately, reinstalling the game is only a temporary fix, because the bug will come back if you run into an Ivysaur again.

If you really need to see the stats on your Ivysaur but you don’t want to risk being affected by the bug, then try clicking on a Pokemon a few spaces away on the Pokedex and then swiping right or left until you get to Ivysaur. This technique works as a workaround for the Grimer bug, but it’s not clear yet if it’s always effective for the Ivysaur bug. Since the two problems are similar, it’s certainly worth a try. 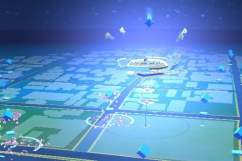