Update: We previously said that Wrath could be inherited by Sonya. However, Wrath can only be inherited by melee weapon users and infantry and armored units only. Our sincerest apologies.

More heroes from the ever popular Fire Emblem: Path of Radiance have made their way to Fire Emblem Heroes. But are they worth summoning? Read on to find out.

Thanks to GamePress for providing me with research.

Nephenee is really, really good. She’s in the second highest speed tier and third highest defense tier among lance users as well as . While her attack isn’t too high, that doesn’t matter because of her base skills. She comes standard with Moonbow, which is one of the best Special Skills because of its low turn cooldown and armor ignoring effects. She also gets the Slaying Lance which lowers the cooldown count by one. On top of all that, she get’s Wrath, which lowers the cooldown even further at the start of the turn if using an attacking Special Skill and if at 75 percent HP or lower. It also adds plus 10 damage from the special. This means that she can activate her special every turn, annihilating enemies left and right. While her HP and resistance are on the low side, she’s still a force to be reckoned with. If you for some reason don’t want to use Nephenee, you can have units like Wo Dao users inherit Wrath because the Special Skill-boosting effects of their weapons stacks with Wrath.

Try to grab a Nephenee with a positive IV in attack or speed and a negative IV in resistance.

The Atk/Spd 2 skill she gets is good, but you’d probably want her to inherit Swift Sparrow as that grants an extra two points in speed an attack than Atk/Spd 2. The trade off is that you only gain the stats when initiating attack. Fury is also a good choice as it boosts all stats at the cost of taking damage every time someone attacks you. If you get a Nephenee with a negative speed IV, you could trade Wrath for Quick Riposte thanks to her bulk allowing her to tank hits and deal damage back. If you don’t mind taking extra cooldown turns, you could swap Moonbow with Luna as that has a bigger armor-ignoring effect or even Ignis to take advantage of her high defense.

Pair her with a unit who can raise Nephenee’s speed and attack such as Brave Lucina or Ephiram. Also pair her with units that can extinguish her counter of green mage units such as Ryoma.

Oscar is immediately comparable to Roderick stat wise, though Oscar’s stat spread is better offensively. He’s among the fastest cavalry units and can get even faster with cavalry buffs. His base kit is nice and synergies well with a lot of other skills. Sapphire Lance is great for countering the many red units that threaten the metagame and Lancebreaker is great for dealing with other lance units. His Rally Speed/Defense Support Skill is great for fast melee users who want a little extra bulk, and it combines wonderfully with Spur Spd/Def 2. The only glaring weakness is low defense and resistance. All of this combined makes Oscar a very capable unit. However, he faces a lot of competition from more powerful and specialized lance users.

Oscar would appreciate a positive IV in speed and a negative IV in resistance.

Since Oscar is so comparable to Roderick, he feels right at home inheriting his Firesweep Lance which prevents both the user and enemies from using counterattacks. This combined with Drag Back means that Oscar can get away scot-free with dealing damage while bringing the enemies closer to teammates so they can finish them off. Lancebreaker works best with slower, bulkier units so you can ignore it in favor of Drag Back. Also add Swift Sparrow or Darting Blow as well as Luna to boost his damage dealing capabilities. While Spur Spd/Def is alright, you’re best with a cavalry boosting skill like Ward Cavalry or Goad Cavalry if you have other cavalry members in your team.

Oscar works best with other cavalry units that can boost his stats as well as speedy melee units who appreciates his Rally skill. Also get someone who can take care of pesky green mage units.

As one of three other sword-wielding flying units, Elincia has the highest attack and speed. Among all flyers, she is in the top third tier for attack
and top second tier for speed. This combined with her Amiti, which is essentially a Brave Sword with more might and a much smaller penalty for speed (-2 instead of -5), makes her a very scary threat as she can strike opponents four times thanks to her high speed. She gets even scarier with a flier buff. Despite her low defense and relatively low resistance as well as a big weakness to archers, she’s still quite a threat on the battlefield.

She works wonders with a positive IV in speed and a negative IV in resistance or defense.

Death Blow is great for raising your attack but you could also go with Swift Sparrow to raise your speed as well. Either that or inherit Life and Death as that gives an even higher boost to attack and speed at the cost of making your defense and resistance even lower than it already is. Flier Formation is good for keeping up with other flier units but you’re better off with Desparation as you can attack and follow up before the opponent counterattacks if you’re at 75 percent HP or below. Then inherit Hone Fliers to boost your other flier teammates.

Pair her with other fliers to take advantage of flier boosts. Also give her a mage unit with a Raven tome to take care of archers.

We got quality instead of quantity with this summoning banner. Nephenee and Elincia are the best in their class and should not be passed up. Elincia especially is a must for flier teams. Oscar is good too but he’s outclassed by many other units in the game. When you do summon, be sure to focus on blue and red orbs.

If you managed to nab any of the Brave Heroes, check out the guide below. 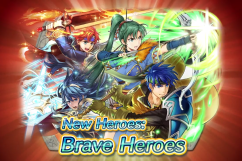