Gears of War 4 marked the beginning of a new story being told within Xbox Game Studios’ lauded third-person shooter series.

Once Gears fans reached the end of their journey in that installment, a huge revelation came to pass that was tied to one of the game’s newest protagonists. Gears 5 will expand on that character’s origin and delve even deeper into the origins of the vicious Locust army. Along with a single-player campaign that is promising to offer something new to longtime players, Gears 5 is arriving with a new co-op mode and welcome improvements to its legacy modes. The newest entry in the Gears of War franchise is setting itself up to be one of Fall 2019’s most sought after releases.

Before Gears 5 lands in everyone’s hands, let’s take a look at everything there is to know about this much-anticipated sequel.

Gears 5 is set for launch on Xbox One, Xbox One X, and PC (Microsoft Windows) on September 10, 2019. The game will also be available on launch day to both Xbox Game Pass and Xbox Game Pass Ultimate subscribers. The “Ultimate Edition” of Gears 5 allows players to access the game four days earlier on September 6, 2019.

Gears 5’s campaign can be tackled solo or with two other players via three-player online or split-screen co-op. As a direct continuation of the story being told within Gears of War 4, this sequel mainly follows the exploits of Kait as she looks to learn more about her family’s origins and its connection to the Locust. During her journey, Kait and her allies (JD, Del, and Marcus) must contend with the growing threat of the Swarm, who has gotten stronger due to their corruption of the Coalition’s robot army.

You can read up on the game’s main character profiles via the official website’s plot descriptions below:

• Kait Diaz: Kait was born and raised beyond the COG’s formal jurisdiction. Her mother, Reyna, was the leader of her isolated Outsider village. Yet Kait also has deep family ties to the COG: her late father was a widely admired lieutenant colonel during the Pendulum Wars and her uncle, Oscar, was a highly decorated frontline Gear in the early years of the Locust War. Even after her induction into the COG, her true loyalties are unknown, even to her. Kait hasn’t told anyone about the Locust necklace her mother gave her before she died and the pressure of this secret is eating her alive. These tensions bubble under the surface as the squad fights off the Swarm and learns about Kait’s past.

• JD Fenix: The son of Marcus Fenix and Anya Stroud, JD grew up surrounded by stories of his war-hero parents. Unfortunately, an incident at Settlement 2 left JD deeply disillusioned with the COG, after which he and his best friend, Del, went AWOL and joined an Outsider village. After helping to fight back the Swarm’s initial push, JD has once again attracted the interest of First Minister Jinn, much to his father’s and friends’ dismay.

• Del Walker: Del lost both his parents in the difficult aftermath of the Locust War and was siphoned into a boarding school, where he met JD Fenix. As a young officer, Del was part of a disastrous mission at the COG’s Settlement 2, which shattered his faith in First Minister Jinn’s government. Although Del recognizes the need to fight with the COG in the aftermath of the Swarm’s emergence, he is not necessarily thrilled to be doing so—and he is wholly unprepared to learn details about the Settlement 2 incident that JD has kept from him.

• Marcus Fenix: After the Locust War, Marcus played a limited role in the COG, even though his wife, Anya, initially led the government. After Anya’s death, it became clear that the COG would favor authoritarian control over civic-minded rebuilding. Now that he and JD have been reunited, Marcus finds himself once again fighting for the COG, but his frustrations with authority and conflicts with his son remain ever-present.

“Escape,” Gears 5’s newest three-player co-op mode, actually has a story of its own. Lahni, Keegan, and Mac are known as “Hivebusters,” a special unit with ties to “Team Scorpio.”

Players will take control of each character as they’re tasked with exterminating the Swarm hive from the inside. Lahni handles the Scout role, Keegan fills the Support role and Mac works as the trio’s Tank. Once they’ve all been captured by “Snatchers” and make their way to the heart of the Swarm’s hive, they’ll need to plant a “Venom Bomb” and escape the hive before everything goes boom. Three players will need to utilize their chosen character’s skills and weapons as they take down the Swarm opposition and try to make their grand escape.

Gears 5’s competitive multiplayer suite will feature a multitude of game types, which includes “Arcade” and “Escalation 2.0.” Along with a host of classic maps, Gears 5’s will also introduce a litany of brand new maps to play on. The playable modes that you can look forward to hopping into during the July 2019 “Tech Test” and the complete game include the following:

• Escalation: Gears 5’s updated competitive game type.
• Arcade: a new and approachable multiplayer game type.
• King of the Hill: a longtime fan favorite.
• Bootcamp: a new training mode for players new to Gears or those that want to practice their skills and learn new mechanics.
• Tour of Duty: a short series of challenges for players to earn content. Completing all of these challenges unlocks an exclusive Tech Test Banner. Players can also unlock three Versus Weapon Skins by completing some additional challenges. 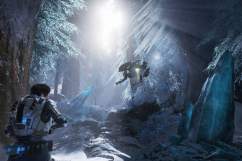 The franchise’s most celebrated mode, “Horde,” will make its return in this brand new sequel. What’s known thus far about Gears 5’s version of Horde is its debut of new hero abilities. Once again, players will need to fight together in a co-op setting as they accumulate power, build up their defenses, upgrade their skills, and eliminate different sets of enemies.

Each character now comes with their own special ability, which is referred to as “Ultimates.” JD relies on an “Airstrike” to rain down death from above, while Fahz uses his “X-Ray” ability to see enemies through walls and even kill them even if they’re behind an obstacle. As for Kait, her “Cloak” Ultimate ability allows her to go invisible for an allotted remainder of the time. And finally, Jack’s “Hijack” ability gives the helper robot the chance to hack into an enemy and directly control them.

Another one of Gears 5’s newest modes is a Map Builder mechanic. At launch, the game will allow players to build their own custom maps that can be utilized within Escape mode. Once completed, these maps can be shared online as other players attempt to brave the dangers of your customized Hive playpen.

Gears 5 is available for pre-order via two different editions – the Standard Edition (sold here) and the Ultimate Edition (sold here). The bonus character pack you’ll recieve for pre-ordering either edition is the “Terminator Dark Fate Character Pack,” which comes with skins for Sarah Connor and the T-800 from the film, the “Vector Lancer” weapon skin, and seven days of “Boost.” Another bonus that comes with pre-ordering either edition is access to Gears 5’s Tech Test in July 2019. 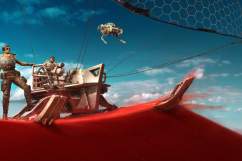 Check out our review for Gears 5 right here.