Just days before the start of Fortnite Season 4, a lot of leaked information is coming out about what to expect.

Keep in mind that none of this is confirmed as of yet, but it does come from reliable sources who have been on the money about leaks in the past.

The two names in question here are of course prominent Fortnite leakers HYPEX and ShiinaBR, both of which have been right numerous times before.

Each leaker claims to know insider information about the upcoming season, with HYPEX saying he knows what will be happening in the trailer while Shiina claims to know some interesting facts about the Battle Pass.

Here’s what the two leakers are saying.

According to a rumor, there will be 2 Battle Passes this season.

There isn't enough evidence for this leak, so I personally wouldn't yet consider it 100% confirmed, but we may know at some point tomorrow whether it's true or not.

ShiinaBR cites a rumor that says there could possibly be two separate Battle Passes this season, but does note that there’s not a ton of evidence for this.

If there are two separate passes available for purchase, that would be the first time in the history of Fortnite that something like this has been done.

Interestingly enough, the leaker does note that we might not if this rumor is actually true or false by tomorrow, August 25, which is just two days before the new season begins.

For the time being, we should just take this one with a grain of salt.

At the end of the trailer 2 sides will stand across each other like some faceoff on top of a hill (Marvel & popular Fortnite skins), then Wolverine shows his claws and Peely shows his claws too.

Meanwhile, HYPEX says Wolverine will make his official Fortnite debut in the Season 4 trailer in what appears to be a fight between him and other popular characters.

This sounds a bit like what Thor is doing currently in the pages of his in-game comic, so it wouldn’t be that strange to see Wolverine doing it too.

Another interesting thing to note is that Peely fans sound like they’ll be getting yet another skin, this time featuring Wolverine claws.

Peely has essentially become the new Cuddle Team Leader and is good for one or two new skins each season.

We’re not exactly sure why he has become so popular, but we’re sure the Peely fans out there aren’t complaining too much.

Fortnite Season 4 begins August 27 and we’ll find out what rumors are true and what are false then. 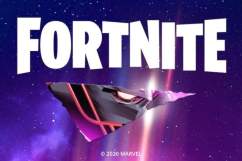 All Fortnite Season 4 Teasers So Far