A review code for Outriders was provided by the publisher.

The looter shooter sub-genre has certainly been through some rough periods, to say the least. The Borderlands, Destiny, and The Division games have each provided fans with a substantial experience that sticks close to the best aspects of the genre. But releases such as Anthem have shown that an unfocused vision, an overly repetitive gameplay structure, and a lackluster loot cache can drive gamers away in droves. Development studio People Can Fly has clearly taken notes on what and what not to do when it comes to crafting an adequate looter shooter. Their expertise in the area of first- and third-person shooters is evident in their newest original IP and, for the most part, it succeeds. Outriders has some rough patches here and there, but the good far outweighs the bad. As far as looter shooters go, Outriders has a ton of promise that will hopefully be expanded upon as time wears on. 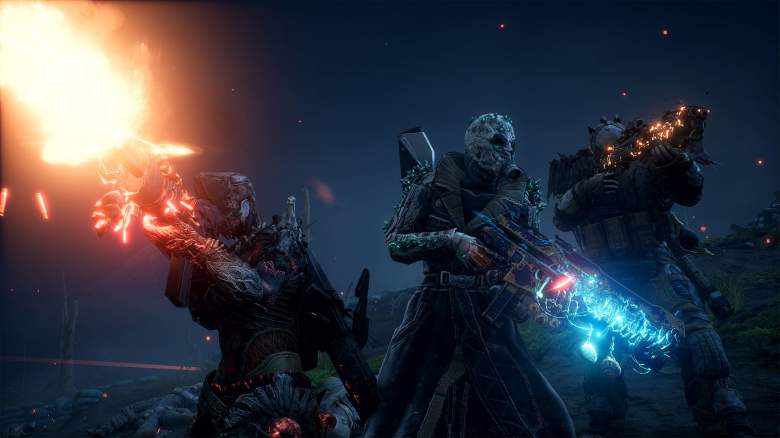 Plot-wise, Outriders offers an intriguing premise of the human race leaving Earth to travel through the annals of space to find a new home. You take the role of a highly feared and respected soldier known as an Outrider, who steps foot onto the planet of Enoch in hopes of restarting civilization. However, things take a turn for the worst when a mysterious anomaly storm causes you and the first settlers on Enoch to endure some unfortunate events. Your Outrider ends up getting stuffed into a cryo tank in order to deal with a near-fatal injury and ends up frozen asleep for a shockingly long time. Upon being freed, you enter a war-torn planet and come to discover that your allies have dealt with quite the tumultuous way of life since you’ve been put on ice. After encountering another anomaly storm firsthand, you find out that you have the ability to endure it and emerge with otherworldly powers to boot. That hot intro then leads into a surprisingly solid story that plays out over Enoch’s dark and foreboding expanse.

What keeps Outriders’ plot from feeling rote and boring are the characters themselves. Your soldier of fortune has quite the mouth on them and usually delivers some funny quips when it comes time to take on another mission. The many individuals you come across are either hardasses that like to vocalize their self-proclaimed superiority to you, quirky personalities, or smartasses that have a few one-liners of their own that are way funnier than you’d think. The planet of Enoch itself treats you to a bunch of different environments and there’s a ton of lore to soak in as you move from place to place. Getting to the mysterious signal at the heart of Outriders’ main conflict pushes you to get to the bottom of what it entails. Thankfully, the myriad of wild characters you encounter and the side struggles you embroil yourself in offer a wealth of worthwhile diversions. 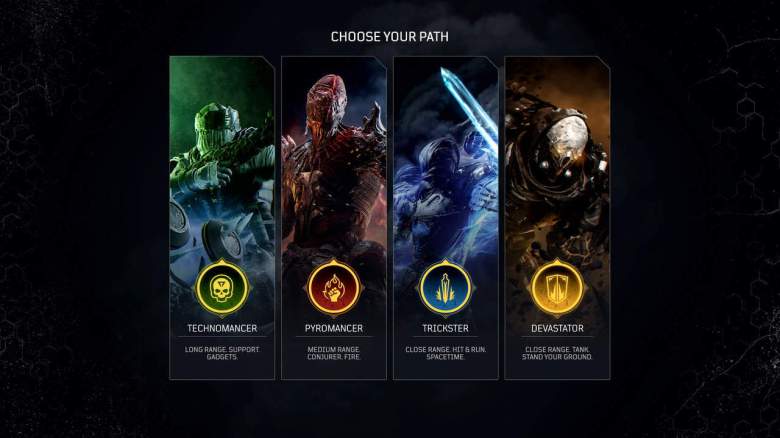 The main attraction of this new looter shooter is (well, obviously) the looting and shooting. But what sets this game apart from its contemporaries is a focus on making good use of unique superpowers. You have the opportunity to master the abilities of one of four classes – Trickster, Pyromancer, Devastator, or Technomancer. Blasting apart rabid gunmen and alien beasts is cool and all, but putting your class abilities to work provides the most fun of all. Trapping a flood of enemies within a shield that slows them to a crawl, cooking a foe until they burn to a crisp, causing the ground beneath you to trip up your foes, or sending out a missile launching turret are just a few of the dope specials you can pull off via your chosen class. And thanks to the deep leveling system and unlockable abilities you’ll earn over time, Outriders’ commendable fun factor maintains from start to finish.

Getting into the heat of battle showcases Outriders best and worst traits. Tagging enemy hordes alongside your two fellow soldiers, while you’re all syncing up your abilities, is always a blast. Unfortunately, the game’s cover system isn’t as refined as it should be. Running between cover can sometimes feel a bit unwieldy and it’s easy to get overwhelmed when the game throws an army of baddies your way. Skirmishes can certainly get a bit hectic and they’re especially brutal when you’re on your own and run into an “Altered” being such as yourself. Thankfully, Outriders’ World Tier system lets you adjust the difficulty if things get a bit too challenging. If you have it in you to combat the ever-increasing challenge of this game, its World Tier system offers nice incentives when you go up another level and test your mettle. 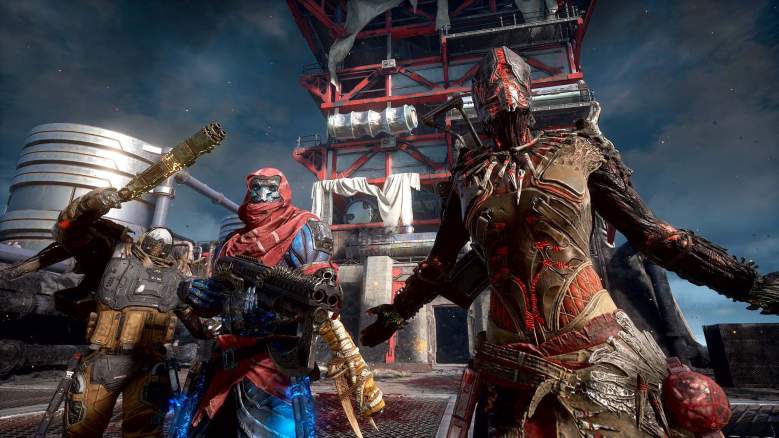 On the loot front, Outriders is certainly generous. Getting your hands on a new, sweet piece of gear or a powerful firearm is a regular occurrence. The lack of microtransactions is a welcome change of pace from the usual looter shooter, which means you can expect to get your hands on the game’s rarest and most devastating weapons without having to spend a dime. The presence of shops within various hubs lets you acquire even more delectable loot, plus you’ll find yourself getting even more involved in your gear loadout once you unlock the mod system. Upgrading your weapon and gear pieces in an effort to attach special boosters to them gets highly addicting – freezing a single foe with your improved double pistols and proceeding to flame them up soon after is just one example of the cool dual-actions you can take with your anomaly abilities and modded guns in tow. 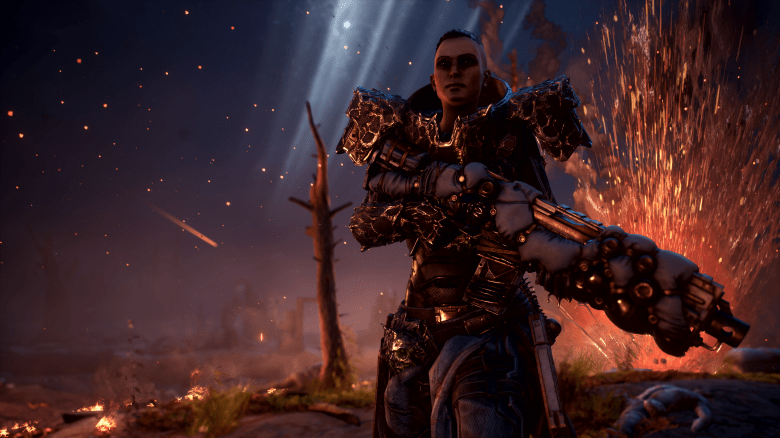 There’s certainly a lot to do during your time spent in the dark, war-torn world of Enoch. You’ll derive hours of fun out of the main campaign, a bevy of side missions, and wanted missions that put you on the heels of incredibly powerful foes. Doing them with a pair of equally adept Outriders is definitely worth the price of admission. But sadly, server issues have hampered that part of the experience at launch. Logging in just to play on your own is usually a long affair. And trying to get into a random party can regularly test your patience due to the long wait and frequently dropped connections. Once you finally hook up with a team, the action can get a bit choppy and come off a bit glitchy in the process. Couple that with the presence of visual bugs and it’s clear that Outriders needed a bit more time in the oven. Hopefully, the next set of updates from People Can Fly can apply some much-needed fixes to those rampant issues. 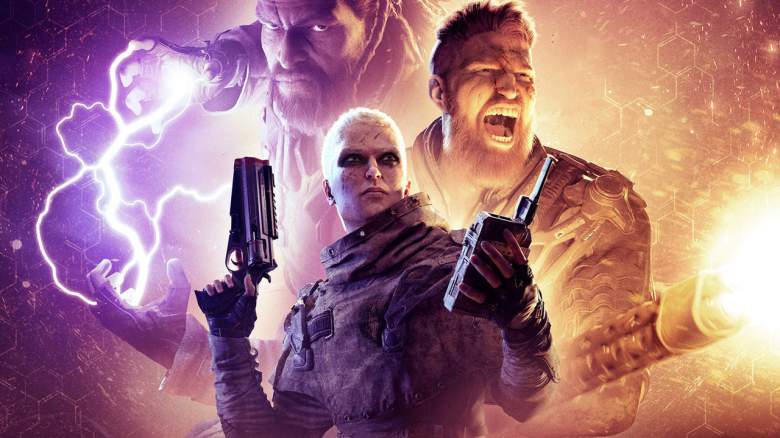 Outriders ends up being a surprisingly addictive experience that mixes in intense shootouts, a unique mix of class-based abilities, a healthy loot system, and a fun approach to upgrading your skills/gear. Exploring every nook and cranny of Enoch brings you to an assortment of different climates and locales, plus you’ll come to enjoy most of the personalities you’ll interact with within each one.

The bugs that take a hit to the visuals, a rough cover system, and rampant server issues at launch certainly keep Outriders from hitting that extra tier of high quality, however. Even still, Outriders provides an addictive looter shooter experience that emphasizes high-octane battles that are even more amazing when you and two other players take on enemy forces with your unique abilities. This is the type of game that offers a ton of goodness at launch and can only get better over time.