On Friday, Boston bombing suspect Dzhokhar Tsarnaev was captured by Boston authorities after he was found hiding inside a boat. On Sunday, the Massachusetts State Police released video footage of how they ultimately found out the location of Tsarnaev. Through the use of thermal imaging.

The following videos offer some more insight into last week’s tragic events. The first video is a video diary of what took place, while the second video is an interview with Anwar Kazmi and his comments on the bombing suspects:

And finally, this video offers some comments on the deadly gun battle that went down between police officers and the Boston bombing suspects: 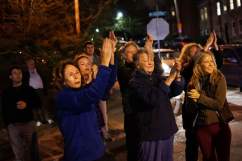 What Does Dzhokhar Tsarnaev’s Arrest Mean?: 5 Fast Facts You Need to Know

Loading more stories
wpDiscuz
0
0
Would love your thoughts, please comment.x
()
x
| Reply
This thermal image led to the discovery and capture of the Boston Bomber.