Australia’s Dante Exum was taken as the No. 5 pick overall by the Utah Jazz in the 2014 NBA Draft.

NBADraft.net and DraftExpress.com both project Exum as the fourth overall pick, and the top international player taken. The video above breaks down the 18-year-old.

Kentucky, Indiana and several other top college programs had recruited Exum, but he announced in January that he was going to skip college and enter the draft.

1. He Was the No. 5 Pick Overall Pick in the Draft By the Utah Jazz

Exum was chosen 5th in the 2014 NBA Draft by the Utah Jazz. The Australian talent was expected to be a top pick, but it was uncertain because teams were questioning his experience against tough competition since he is coming out of high school.

2. His Father Played at North Carolina With Michael Jordan

Exum’s father, Cecil Exum, played at the University of North Carolina in the early 1980s alongside Hall of Famers Michael Jordan and James Worthy.

At UNC, Exum was a member of the 1982 Tar Heels’ NCAA championship, when he was a sophomore and Jordan was a freshman.

Exum did not play in the Heels’ 63-62 win over Georgetown in the national championship game. Worthy scored 28 points in the game and was named the tournament’s Most Outstanding Player. Jordan scored 16 and hit the go-ahead jumper in the final minute against a Hoyas team that included Patrick Ewing.

But he played well enough as an upperclassman to be drafted by the Denver Nuggets in the ninth round of the 1984 NBA Draft as the 194th pick.

The elder Exum never made an NBA roster, but he played professionally for seven seasons in Australia, for the National Basketball League’s North Melbourne Giants, Melbourne Tigers and Geelong Supercats, and eventually settled Down Under.

3. He Was Trained at a Special Sports Institution (AIS)

A specialized sports psychologist speaks to students at the Australian Institute of Sports. (Getty)

Dante Exum was trained in a sports training institution in Australia called the Australia Institute of Sports (AIS) which is run by the Australian government.

4. His Father Told Him to Go Straight to the NBA

At the age of 18, Dante had a choice to make: Should he go to college or go straight to the NBA? He could have been an elite college player, following the path of players like Andrew Wiggins, Jabari Parker and Julius Randle, all of whom are likely to be top picks in this year’s draft after playing a single season in college.

But Cecil Exum’s advice was clear: Rather than go to college and risk a career-threatening injury before ever cashing an NBA check, the best move was to go straight to the NBA.

Watch the video above for an Australian TV interview with both Exums.

5. Teams Had Concerns About Exum Adjusting to the NBA

It’s not clear how much of an adjustment Exum will have playing against the elite competition in the United States.

His work ethic has been admired by NBA coaches already, but the competitors and nature of the game are different than in Australia.

Because Exum never played in college, teams are wondering how he will perform against the best players in the world and in comparison to top prospective draft picks such as Parker (Duke), Wiggins (Kansas) and Joel Embiid (Kansas). 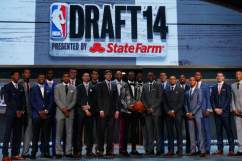 Loading more stories
wpDiscuz
0
0
Would love your thoughts, please comment.x
()
x
| Reply
Australia's Dante Exum was taken as the No. 5 pick overall by the Utah Jazz in the 2014 NBA Draft.