The Navy SEALS sniper who killed Osama bin Laden wasn’t always an elite physical specimen capable of carrying out one of the biggest missions in American history. In fact, before Rob O’Neill joined the SEALs, he barely knew how to swim.

O’Neill, recently named as the man who pulled the trigger on the shot that killed the most wanted terrorist in history, spoke out in an interview with Fox News’ Peter Doocy on a two-part special titled The Man Who Killed Usama bin Laden.

Part 1 of the special aired Tuesday night, with Part 2 scheduled to air Wednesday night at 10 p.m. Eastern. You can watch a clip from the special in the video at the top of this post.

Read on to find out what O’Neill revealed about his background and his thought process leading up to a mission that he said was the biggest for the United States “since Washington crossed the Delaware.”

1.Before Joining the SEALS, O’Neill Could Barely Swim

behind the scenes in Butte, MT with Rob O'Neill: the man who killed Usama bin Laden pic.twitter.com/nrWOT5nyxW

After graduating from high school, O’Neill said he worked a series of odd jobs, including a stint at McDonald’s and one as a delivery man for a restaurant that sold taco pizzas in his hometown of Butte, Montana. After a relationship with a girl he was dating “went sideways,” he decided to walk into a local military recruiting office.

Becoming a SEAL, though, wasn’t his initial goal. O’Neill said he showed up looking for the representative of the Marines, who he said are good recruiters in part because they have the coolest uniforms.

O’Neill made it into the SEALS — and eventually, SEAL Team 6, the elite unit that took out bin Laden — despite entering training with virtually no experience as a swimmer.

In fact, O’Neill said he was such a novice that the best thing he could say about his swimming ability was that he could “stay alive” if he were in a pool. But O’Neill vigorously trained at a local pool before entering SEALs training and got through training, which includes extensive ocean swimming at long distances.

During boot camp, instructors once ordered O’Neill and his fellow recruits to complete a 5 1/2-mile ocean swim twice — an unusual order that he said was “the meanest thing anyone’s ever done to me.”

“It was just a miserable experience,” he said of training.

2. O’Neill Was Thinking of a Quote From George W. Bush Before He Killed bin Laden

O’Neill said when he was on his way to kill bin Laden, a quote popped into his head from President George W. Bush, who vowed after the September 11 terrorist attacks that the United States would track down the “faceless coward” who attacked the United States.

He also recalled watching TV reports of the planes hitting the World Trade Center on September 11 and knowing within seconds that bin Laden was involved.

“We said the words Usama bin Laden within 30 seconds. We knew everything had just changed." –Rob O’Neill tells @pdoocy about Sept 11 attacks

3. O’Neill Talked His Way Into an Assignment That Put Him in Position to Kill bin Laden

“We accomplished our mission and I was a big part of it, ” he said. “I was a part of it. But, he added “I don’t know what’s going to happen. I did something I have to live with every day.”

In the lead-up to the mission, though, O’Neill was intent on giving himself a chance to kill bin Laden. In fact, he was initially assigned to be a team leader on an external security team stationed outside the house where the CIA correctly thought bin Laden was hiding. But he talked his way out of the team leader post in favor of an assignment that gave him access to the third floor of the house, where a CIA analyst had told him bin Laden would be.

4. O’Neill Wrote Letters to His Kids to Be Given to Them in Case He Died

O’Neill and his fellow SEALS knew they were undertaking an extremely dangerous mission and that death was a real possibility.

“The more we trained on it, the more we realized this is going to be a one-way mission.” -Rob O'Neill on Usama bin Laden mission

With that in mind, he wrote letters to his children to be given to them in the event of his death.

Thankfully, the letters weren’t needed. O’Neill said he shredded them when he got home to make sure no one read them. Something horrible could have happened that day, O’Neill said, but instead, something great happened.

He said the letters apologized for not being around, but said that he died in the right place, with the right people, on the most important American military mission “since Washington crossed the Delaware.”

O’Neill said the last person he called before the mission was his dad, who was trying to park in a Walmart parking lot at the time of the call.

“I called him to say goodbye and thanks for everything.” –Navy SEAL Rob O’Neill on the phone call to his dad before going on bin Laden raid

5. O’Neill Was Also Part of the Team That Rescued Captain Richard Phillips

The Maersk Alabama that Capt. Phillips was on when it was hijacked by Somali pirates.

The mission to kill bin Laden was probably the most dangerous O’Neill has ever been on, and certainly the most high profile. But it was far from the first high-profile rescue mission of which he was part.

O’Neill was also part of the team of SEALS that rescued Captain Richard Phillips, whose ship had been highjacked by Somali pirates in the Indian Ocean in 2009 and whose dramatic rescue was turned into a movie starring Tom Hanks.

O’Neill said he learned he’d be deployed on the mission when he was at a tea party at the preschool with one of his children on Good Friday, which also happened to be his birthday.

He stopped at a 7-Eleven before leaving on the mission, but he got hung up at the convenience store by a customer in front of him who was taking his sweet time.

O’Neill said the man picked up the day’s copy of USA Today, which had news of the highjacking on its front page, slammed the paper down on the counter and said he wished that someone would do something about the situation.

Little did the man know that O’Neill was about to do something about it himself, but that he was being delayed by the customer’s lollygagging. 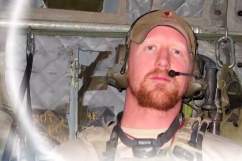