The New York City supermarket heiress who posed with Bill Clinton in a photo that has since gone viral has filed for divorce from her husband after just three years of marriage.

Andrea Catsimatidis filed for divorce Wednesday from husband Christopher Nixon Cox just as the photo of Catsimatidis and Clinton was making its way around Twitter.

Here’s what you need to know about Catsimatidis and her politically connected family and in-laws: 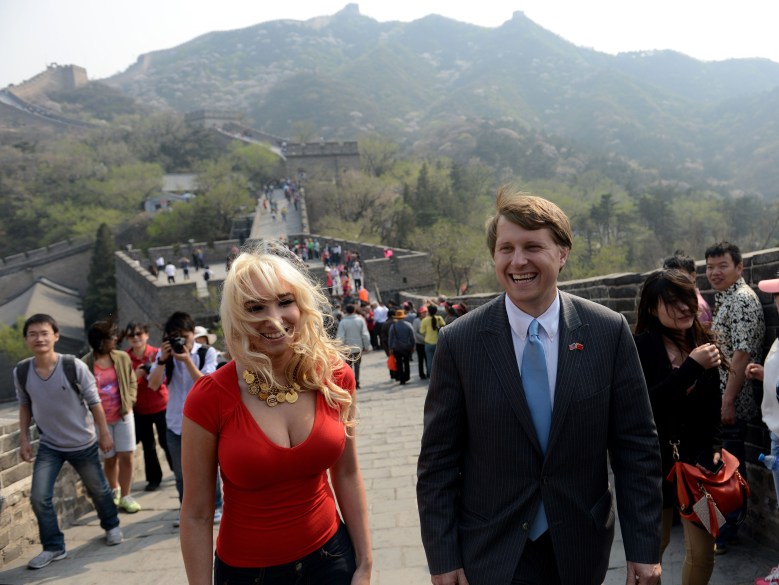 Christopher Nixon Cox and Andrea Catsimatidis on a trip to Beijing, China, in 2013. (Getty)

Though the Catsimatidis family is active in Democratic politics and is close with Bill and Hillary Clinton, Andrea married into one of the most prominent families on the other side of the political aisle.

Cox is the grandson of former president Richard Nixon and the only son of Tricia Nixon Cox and Ed Cox, the New York state Republican Party chairman. 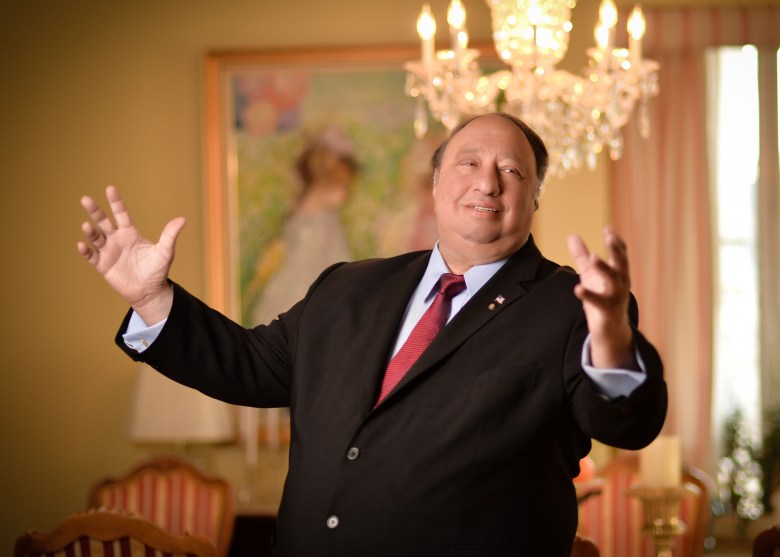 John Catsimatidis, a longtime Democrat and Clinton ally, opted to run for mayor of New York in 2013 as a Republican, but lost the primary to former Metropolitan Transit Authority chairman Joe Lhota, who went on to get crushed by Bill de Blasio in the general election.

When announcing his candidacy in 2013 from the steps of City Hall, Catsimatidis talked up his humble roots and said he wasn’t a “Michael Bloomberg billionaire.”

Bombastic billionaire business man John Catsimatidis officially announced his candidacy for mayor as a Republican on the steps of City Hall today in a freewheeling press conference that touched on his philosophies on life, business and his positions on many of the major issues of the day. Though Mr. Catsimatidis deviated substantially from the prepared remarks distributed by his staff prior to the event, he did focus on his background as a native New Yorker and his experience as a businessman.

“It’s not that I’m only a business person, I came from 135th Street. I never forgot where I come from. I’m not a Mike Bloomberg billionaire, I’m not wearing a $5,000 suit. I think my wife paid $100 for this,” said Mr. Castimatidis, grabbing the lapel of the wrinkled black suit that covered his ample frame.

Catsimatidis also flirted with a mayoral bid in 2009 but dropped out when Bloomberg announced he was seeking a third term.

3. Catsimatidis Was Pictured With Her Mom & Bill Clinton

The photo that went viral earlier this week featured Catsimatidis in a low-cut, bright red dress, posing between Bill Clinton and Catsimatidis’ mom, Margo. Bill and Hillary Clinton were both in New York for a Clinton Foundation dinner at the Rainbow Room in midtown Manhattan. John Catsimatidis tweeted out a photo of Bill and Hillary addressing the crowd.

The full photo of Clinton with Andrea and Margon is pictured above. But a version of the photo with Margo Catsimatidis cropped out went viral on Twitter and Facebook after it surfaced December 16. It shows the former president standing behind Catsimatidis with a hand placed on her arm.

Critics of Bill Clinton seized on the photo, deeming it “creepy.”

4. Catsimatidis Met Cox When She Was 17 & He Was Working for John McCain 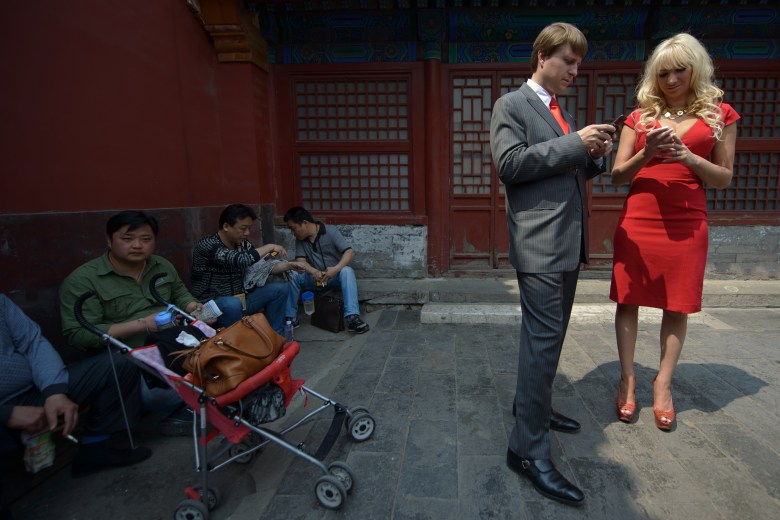 Christopher Cox and Andrea Catsimatidis during a trip to Beijing, China in 2013. (Getty)

Catsimatidis met Cox in 2008, when Cox was working for Senator John McCain’s presidential campaign and was appearing on a debate panel representing the GOP position against Democratic Congresswoman Carolyn Maloney of New York.

The New York Times notes that Catsimatidis, 11 years Cox’s junior, was five days shy of her 18th birthday at the time they met.

Mr. Cox appeared on a debating panel at the Hewitt School on the Upper East Side, arguing the Republican position against Representative Carolyn B. Maloney, the New York Democrat. Later, Ms. Maloney had a Hewitt senior that she knew, Andrea Catsimatidis, ushered to the stage.

Ms. Maloney and Mr. Cox were chatting when Ms. Catsimatidis arrived, so Ms. Maloney introduced them. “Chris went on talking to Andrea,” Ms. Maloney recalled. “And he hasn’t stopped.”

Mr. Cox found Ms. Catsimatidis poised and engaging. “She was the only person I remembered meeting that day,” he said. Ms. Catsimatidis, who at the time was five days shy of her 18th birthday, found herself taken by Mr. Cox’s political convictions, as well as his boyish looks. 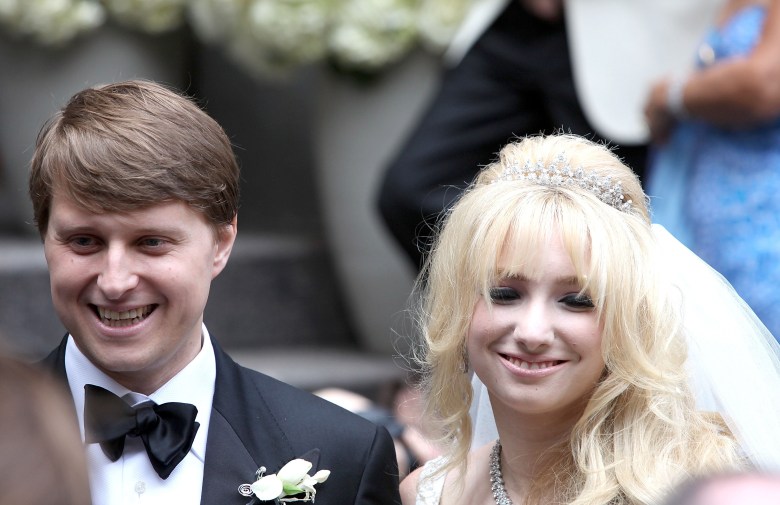 Christopher Nixon Cox and Andrea Catsimatidis at their wedding on June 4, 2011, in New York City. (Getty)

Catsimatidis and Cox were married in 2011 at the Greek Orthodox Cathedral of the Holy Trinity in New York City. They held their reception at the famous Waldorf Astoria hotel.

Among the guests were Hillary Clinton — a guest of the bride — and legendary former Secretary of State Henry Kissinger, who was a guest of the groom and who served in the groom’s grandfather’s administration.

The lavish ceremony included a whopping 700 guests, according to the Times. Also among the guests were former Pennsylvania Governor Ed Rendell, a prominent Democrat, and Carolyn Maloney, the Democratic congresswoman who introduced the bride and groom three years before the wedding.