A 5-year-old girl is dead after being thrown off a 60-foot bridge in Florida. Her father, John Nicholas Jonchuck Jr., 25, has been arrested and charged with her murder.

Here’s what you need to know about Jonchuck and his daughter’s tragic death:

1. Jonchuck Was Being Chased by a Cop at 100 MPH When He Stopped & Allegedly Hurled His Daughter Off the Bridge

WFTS reports that a patrol car first starting trailing Jonchuck when he was allegedly seen driving his P.T. Cruiser at 100 miles per hour on the night of January 7 in St. Petersburg, Florida. As the chase continued across the Dick Misener bridge, the pursuing officer says, Jonchuck suddenly stopped, got out, pulled a little girl out of the car and threw her off the side of the bridge.

The cop who witnessed this horror immediately climbed down a service ladder on the bridge to search for the girl. Jonchuck allegedly drove off again. He was finally arrested by the St. Petersburg cops and Manatee County Sheriff’s deputies after a 30-minute pursuit. That pursuit included Jonchuck allegedly driving the wrong way down an interstate toward police cars.

The body of 5-year-old Phoebe Jonchuck was later found by divers in the water about a mile from the bridge.

2. Cops Don’t Know if Phoebe Was Still Alive When She Was Thrown From the Bridge

Speaking to the media, St. Petersburg Police Chief Tony Holloway said, “We don’t know if the child was alive at the time the child was thrown into the water. The officer said he thought he heard the child scream, but he is not sure. We’re just waiting for the report to come back from the ME’s Office.”

John Nicolas Jonchuck Jr. has been charged with first-degree murder, aggravated assault, fleeing and eluding and aggravated assault with a motor vehicle on a law enforcement officer. In his first appearance in court on January 8, Jonchuck was asked if he had a lawyer, to which the accused killer replied, “I want to leave it in God’s hands.”

The judge replied, “I’m pretty sure God is not representing you.” Jonchuck has been held without bail and will appear in court again on January 12.

3. Jonchuck Had Full Custody of His Daughter

At the time of his last arrest, in 2013, Jonchuck was living here, along Summer Driver in Greater Carrollwood, Florida. (Google Street View)

Jonchuck has a lengthy criminal record with arrests for domestic violence and DUIs, reports WFTS. A friend of Jonchuck’s, Melody Dishman, told the station that she lived with Jonchuck and his daughter, Phoebe. She said that in 2013 she had to call the police because Jonchuck was sending her threatening text messages. Dishman speculated as to what might have made Jonchuck snap:

Maybe financial issues, maybe he had nowhere to go. Maybe it was the drugs. I think the drugs made him snap.

In an interview with WFTS, Phoebe Jonchuck’s mother, Michelle Kerr, said that Jonchuck had custody of their daughter because she has MS. She says her condition made it difficult for her to care for a child.

Michelle Kerr says that her engagement to this man, Guy Kisset, had caused a strain on her relationship with John Jonchuck. (Facebook)

She also said she hadn’t seen Phoebe since Christmas Eve. The Associated Press reports that Kerr and Jonchuck were together for “six tumultuous years.” According to the agency, their relationship resulted in numerous calls about domestic violence.

In her interview, Kerr said that Jonchuck was a good father and she never expected him to do anything like this. She went on describe her daughter as “so lovable,” and added “I would do anything just have her for one more day.”

4. Jonchuck’s Lawyer Tried to Warn Cops About Him — on the Day Phoebe Died

Tampa-based lawyer Genevieve Torres told The Tampa Tribune that she represented Jonchuck in his paternity case. Her assistant, Krysten Malcolm, said that on January 7 she contacted the Hillsborough County Sheriff’s Office and the Department of Children and Families because she was worried about the safety of Phoebe Jonchuck. John Jonchuck had said something in a meeting that made her concerned. Malcolm said, “We definitely questioned his mental state of mind and the safety of the child.”

5. Phoebe’s Body Was Found by a Group of College Students

Ryan Dilkey, the coordinator of the search and rescue for Eckerd College, under the Misener Bridge. (Screengrab via TampaBay.com)

The Tampa Bay Times reports that Phoebe Jonchuck’s body was recovered by a group of college students from Eckerd College. The college runs a renowned Search and Rescue course. The school launched a boat, Rescue 6, to search for Phoebe. At around 3 a.m., the students discovered her lifeless body and handed it over to U.S. Coast Guard personnel. 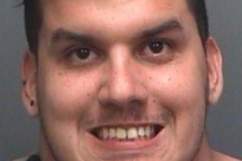 Loading more stories
wpDiscuz
13
0
Would love your thoughts, please comment.x
()
x
| Reply
A 5-year-old girl was killed when she was thrown off of a Florida bridge. Her father, John Nicholas Jonchuck Jr., is charged with her murder.