Authorities in Brazil said Saturday that they had caught pastor Victor Arden Barnard, an American cult leader and fugitive wanted on 59 counts of sexual assault, accused of molesting pre-teen girls in his congregation. Here’s what you need to know:

1. He’s Accused of Molesting Girls in His Church

Barnard was accused of molesting two young girls while he served as their pastor. Since 2000, Barnard’s religious compound was located at a large camp site near Finlayson, Minnesota.

Called the River Road Fellowship, Barnard convinced  followers to allow their young daughters to live with him on the camp site, lated allegedly creating a second separate housing area for these young girls, called his “maidens,” that he called Shepherd’s Camp.

The girls were required to be virgins, according to an affidavit.

As Barnard’s capture has not been yet confirmed by U.S. authorities, he is still listed on the U.S. Marshall’s 15 Most Wanted List.

“The malicious crimes allegedly committed by Victor Barnard make him a significant threat to the community. The women and men of the U.S. Marshals are committed to locating and apprehending this vile fugitive so that he can finally face justice.”

Barnard, 53, was charged in 2014 after a two-yea investigation that resulted in 59 counts of sexual misconduct, each carrying a possible 30-year prison sentence and a $40,000 fine.

An affidavit said that Barnard had told the two unnamed girls, 12 and 13 at the time, that having sex with him was “God’s word.”

According to reports, congregants were reluctant to cooperate with authorities, even after the congregation broke up in 2012 after allegations surfaced that Barnard had been having sex with married women among his flock.

4. His Church Has been Called a ‘Cult’

Barnard was affiliated in the 1980s with Dr. Victor Wierwille, the founder of The Way International, which was accused of promoting inappropriate sexual relationships with female congregants.

Followers of Barnard said that his own sect, Shepherd’s Camp, went beyond The Way International, with Barnard using excerpts from The Bible to justify his own sexual deviancy.

The U.S. Marshall’s Office issued a $25,000 reward for information leading to Barnard’s capture, with a note that the pastor is considered a “threat,” according to Sharon Lubinski, U.S. Marshal of the District of Minnesota:

“Given the nature of his charges, he poses a significant threat to the community.” 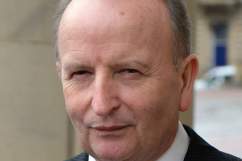