The 21-year-old white man who police say gunned down nine black churchgoers Wednesday night in Charleston, South Carolina is charged with nine counts of murder and could be executed if convicted.

Roof was captured Thursday morning in North Carolina after an exhaustive manhunt that lasted more than 12 hours.

Governor Nikki Haley said Friday morning she expects prosecutors to seek the death penalty if Wood is convicted and said South Carolinians would support that effort.

Witnesses say Roof reloaded five times as he killed six women and three men, including the eminent Reverend Clementa Pinckney, saying he “had to” do it because black people “rape our women” and are “taking over our country.” Among the three survivors were a child who played dead and a woman Roof deliberately spared to tell the world what he had done.

Roof was captured in Shelby, North Carolina, Thursday morning, more than 12 hours after the massacre.

Here’s what we know about Roof, his alleged crime, and his capture:

1. Roof Was Captured 4 Hours Away After an Extensive & Harrowing Manhunt 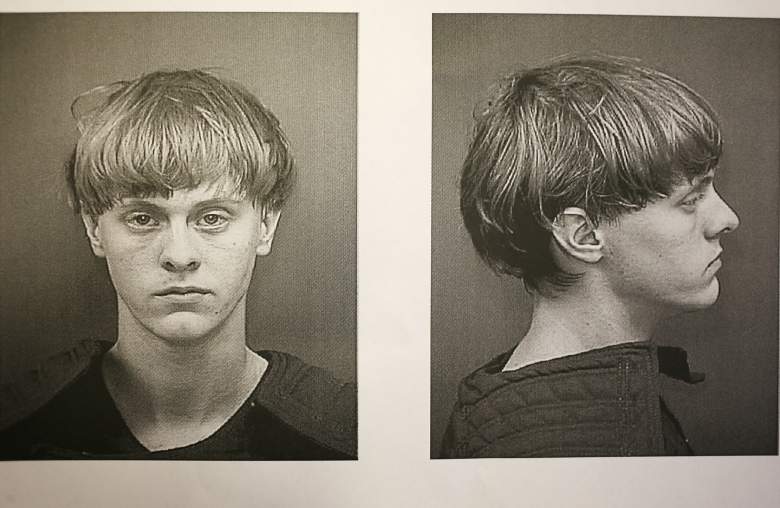 Roof was captured more than 12 hours after a collection of law enforcement agencies ranging from the Charleston Police Department to the FBI launched a massive manhunt.

He was apprehended after a traffic stop in Shelby, North Carolina, a four-hour drive from Charleston, and taken into custody while wearing a bullet-proof vest. (Watch the video below of him being escorted into a police vehicle.)

Roof’s arrest capped a harrowing stretch that brought bustling downtown Charleston to a crawl and included a bomb scare at the church shortly after the shooting.

Cops described Roof as extremely dangerous and pleaded with the public to come forward with information about the case.

After releasing a description of Roof on Wednesday night, police circulated a wanted poster with Roof’s name on it on Thursday morning. Hours after putting out the wanted poster, police acted on a tip and captured Roof in North Carolina.

WISTV showed footage Thursday afternoon of Roof’s car in an area blocked off by police tape.

The suspect’s car, seen after his capture in North Carolina. (Screenshot via WISTV live stream)

The patches on Roof’s jacket in his Facebook profile photo appear to match the flags for Apartheid-era South Africa (upper right) and Rhodesia.

The profile picture on Roof’s Facebook page shows him standing in the woods wearing a jacket with two flag patches: one representing Apartheid-era South Africa and one representing Rhodesia, an unrecognized African state in the 1960s and ’70s that, like South Africa, was characterized by white rule in a majority-black country.

The South African Apartheid, which lasted from 1948 to 1994, was a notorious system of institutionalized racism and segregation that prompted crippling sanctions imposed by the United States and others.

The collapse of Apartheid led to the election of Nelson Mandela in 1994 as the country’s first black president and the first president elected in democratic South Africa.

According to Roof’s Facebook page, he attended White Knoll High School and is from Columbia. The page lists 89 friends, many of them black.

This photo on Dylann Roof’s Facebook page shows Roof with an Apartheid-era South African flag on his jacket.

On May 21 he changed his profile picture. It shows a brooding young man with a bowl haircut and dark circles under his eyes, clenching his jaw and staring down the camera. He stands with his back to a wooded bog and wears a black jacket with an insignia on one breast and the aforementioned flag patches on the other.

A profile for a Dylann Roof of Columbia, South Carolina, on the site Couchsurfing.com describes him as a 22-year-old male, fluent in English and a member since 2001.

A MySpace page for a Dylann Roof in Lexington, South Carolina, shows little activity and a handful of “connections.” The profile picture is a dog sitting on a carpet with a Sunkist orange soda.

3. Roof’s Dad Gave Him a .45-Caliber Pistol for His Birthday

An undated photo of Roof sitting on the hood of his car with a “Confederate States of America” license plate. It’s the same black Hyundai seen at the crime scene and that he was driving when stopped in North Carolina. (Twitter/WLTX)

Roof’s uncle, Carson Cowles, said in an interview with Reuters that Roof’s dad gave the suspect a .45-caliber pistol for his 21st birthday in April.

It wasn’t immediately clear if the pistol was the gun used in the massacre.

Roof’s uncle also told Reuters that police were at the home of Roof’s mother Thursday morning as the manhunt for Roof continued.

President Obama raised the issue of gun control when addressing the massacre on Thursday.

“Someone who wanted to inflict harm had no trouble getting their hands on a gun,” the president said. … “At some point we as a country will have to reckon with the fact that this type of mass violence does not happen in other advanced countries. … It is in our power to do something about it.”

It was the 14th time in Obama’s presidency that he was speaking out about a mass shooting.

4. He Was Busted on Felony Drug Charges Earlier This Year

RadarOnline obtained court documents showing that Roof was arrested on February 28 on felony drug charges. He was arrested again on April 26, charged with misdemeanor trespassing for returning to the scene of the alleged crime.

WYFF has details of the arrest, reporting that Roof was arrested at the Columbiana Centre mall for possession of Suboxone, a schedule III prescription narcotic:

Mall security contacted a police officer patrolling the mall … about a man wearing all black who was asking store employees “out of the ordinary” questions. Workers at “The Shoe Dept.” and “Bath and Body Works” told security that Roof was asking them how many associates were working, what time they closed and what time they leave. The officer approached Roof and asked him why he was questioning store employees. According to the report, Roof told the officer “his parents were pressuring him to get a job.” … Roof, according to the officer, appeared nervous during their conversation. When asked whether or not he had anything illegal in his possession, Roof said “no.” The officer then searched Roof and found an unlabeled white bottle and orange strips, which Roof identified as Listerine Strips. The officer, however, did not believe him and asked again. Roof said the strips were actually Suboxone …

Mother Jones reports that Roof’s lawyer in the drug matter, Ken Matthews, said Roof was “just a normal kid” and he saw “nothing that would indicate that he would take this type of action”:

Mathews has known the Roof family for years, dating back to a custody dispute between Dylann’s father Ben and mother Amy over visitation rights concerning Dylann. Mathews says he spoke to Dylann’s father this morning, and “it’s very, very difficult.”

5. A Survivor Said Roof Told Victims ‘I Have to Do It. You Rape Our Women & You’re Taking Over the Country’

A shooting survivor reported that the gunman reloaded five times and said “I have to do it. You rape our women and you’re taking over the country.”

That quote emerged after Charleston police chief Greg Mullen said at a Wednesday night news conference that authorities were treating the massacre as a hate crime.

“This is a tragedy that no community should have to experience… It is senseless, unfathomable …” Mullen said. “We are going to do everything in our power to find this individual, to lock him up, to make sure he does not hurt anyone else.”

Mayor Joseph Riley Jr., who’s been in office since 1975 and is one of the longest-serving municipal leaders in the country, was emotional Wednesday night as he stood next to Mullen at the news conference.

This is the most unspeakable and heartbreaking tragedy in historic Emanuel AME church, the mother church of the AME churches. People in prayer Wednesday evening, a ritual coming together, praying and worshiping God. To have an awful person come in and shoot them is inexplicable. Obviously the most intolerable and unbelievable act possible.

According to Dot Scott, president of the Charleston NAACP, a female survivor told her family members the gunman initially sat down in the church before opening fire.

Scott told the Post and Courier in Charleston that the gunman told the woman she could escape and said he was letting her live so she could tell the world what he had done.

Nine people were killed in the attack, including Clementa Pinckney, who’s the church’s pastor and a state senator.

President Obama pauses as he makes a statement regarding the church shooting in Charleston. (Alex Wong/Getty)

President Obama, delivering his remarks on the shooting, said he and First Lady Michelle were friends with Pastor Pinckney. “To say our thoughts and prayers are with them … doesn’t say enough to convey the heartache and the sadness and the anger that we feel,” he said.

A 5-year-old girl escaped the race hate massacre by playing dead, it was revealed early today.

A woman churchgoer was also freed by the shooter so she could “tell the world what had happened.”

Family members who were being briefed by chaplains after the shooting reportedly said that a 5-year-old girl survived the attack after she was told to play dead by her grandmother.

It has been suggested that the shooting was timed to coincide with two large political rallies in the city, as just hours before Reverend Pinckney met with Hillary Clinton as part of her presidential campaign, and Jeb Bush was also due to visit Charleston on Thursday before canceling his appearance in the wake of the massacre.