A teen has been arrested in the rape and murder of a pregnant pastor’s wife in Indiana during a home invasion, police say.

Amanda Blackburn, 28, was shot November 10 while she was trying to protect her 1-year-old son, who was sleeping in her home when the break-in occurred. Blackburn was found by her husband, Davey Blackburn, and died two days later.

Police say 18-year-old Larry Taylor was arrested November 23 on a preliminary charge of murder. Two other suspects, Jalen Watson and Diano Gordon, are also in custody, but have not yet been charged, Fox 59 reports.

1. The Suspects Entered the Home Through an Unlocked Door

Davey Blackburn found his wife unconscious in their Indianapolis home when he returned home from the gym at about 8 a.m.

Police believe the intruders broke into their house at about 6 a.m., when Davey left to go to the gym, possibly thinking the house was empty, Fox 59 reports.

Amanda Blackburn was raped by Larry Taylor and then shot in the head, police sources told the news station. The other two men believed to be involved in the break-in had left the home with Blackburn’s ATM card to withdraw money when she was raped and killed, sources told Fox 59.

According to the news station, police have recovered the gun used in the shooting, along with ATM receipts and other evidence. One of the suspects is cooperating with detectives, Fox 59 reports.

“Though it does not undo the pain we are feeling, I was extremely relieved to get the news of the arrest made last night of Amanda’s killer,” Davey Blackburn said in a statement. “The investigators have assured me they have a solidly-built case to ensure justice is levied and the process is expedited. The family and I couldn’t be more thankful for the level of compassion and professionalism the IMPD and investigators have shown us through the last couple of weeks.” 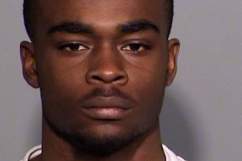 2. Blackburn’s Grieving Husband Spoke Out to Ask for Help Finding Her Killers

Davey Blackburn spoke out on national TV about his wife, in hopes that someone would come forward about the killings.

“She loved the people who were unlovable, gave hope to people who didn’t have hope, didn’t think they had a future,” Davey Blackburn told Good Morning America. “Amanda didn’t have an enemy in the world.”

In a series of videos posted to YouTube just days before Amanda was killed, the couple talks about their marriage and their faith:

Blackburn said in a statement, “Amanda made it her life’s calling to love and serve everyone she knew. Even more, she has made it her life’s mission to see as many people as possible come to know Jesus as their personal Savior. I know that in her death and legacy even more people will come to a saving faith in Christ. I know beyond a shadow of a doubt her desire for me would be to continue what we’ve started here in Indy. I hold firm to the belief that God is still good, that He takes our tragedy and turns it into triumph, and that the best truly is yet to come.”

3. She & Her Husband Founded a Church After Moving to Indianapolis

Amanda and Davey Blackburn, both the children of pastors, moved from South Carolina to Indianapolis in 2012 and founded Resonate Church, according to its website.

They said the moved “with a dream and a calling to start a life-giving church that would connect with people who normally wouldn’t connect with church. Resonate’s vision is to connect people to life-change and see a contagious movement of God spread throughout Indianapolis.”

Davey Blackburn was previously on the staff at NewSpring Church in Anderson, South Carolina, for four years. Amanda Blackburn was the daughter of Phil Byars, the lead pastor at First Baptist Church in Elkhart, Indiana, according to the Elkhart Truth.

Amanda Blackburn graduated from Elkhart Christian Academy in 2006 and the Pensacola Christian College in 2008. She married her husband in 2008 and they had their first son, Weston, in 2014, according to her obituary.

4. She Created #ForIndy to Inspire Acts of Kindness in Indianapolis

Amanda Blackburn and her husband created a hashtag campaign, #ForIndy, to inspire acts of kindness in Indianapolis.

Making someone's Thursday morning better by paying for their donuts! But we had to get some too! #ForIndy pic.twitter.com/pXMr3k4jVY

Amanda Blackburn’s Twitter feed is filled with posts about the acts of kindness she and her husband made as part of the campaign.

5. The Suspects Reportedly Called Themselves ‘The Kill Gang’

Gordan and Watson are being held on parole violations.

The news station reports that detectives have possibly linked the trio to a previous rape and robbery at another apartment building in Indianapolis, where they were living. Two of the suspects are also believed to be responsible for a third burglary and car theft.