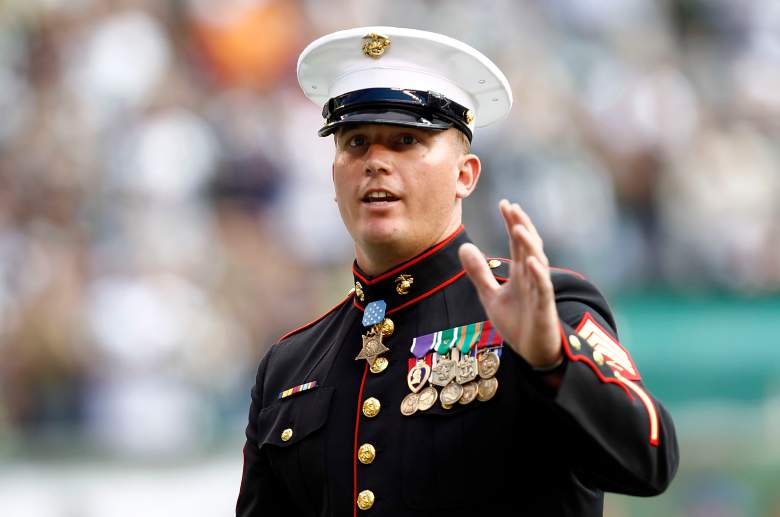 Dakota Meyer confirmed he is the father of Bristol Palin’s newborn daughter with a Facebook post. (Getty)

Meyer, 27, took to Facebook on Christmas Eve and posted a photo of his new daughter, Sailor Grace:

Palin, 25, had cancelled her wedding to Meyer in May 2015 and her mother, Sarah, was the first to announce the decision, releasing a statement from her daughter:

Regarding salacious headlines in recent days about ‘secret wives,’ Dakota and I discussed our past relationships prior to our engagement. Dakota was legally divorced years ago, as any good reporter could and should have disclosed to readers. As usual, false stories and dramatically written headlines begging controversy should be disregarded, and we have faith that our privacy will be respected at this time by those with decency. Thank you! – Bristol

According to Radar Online, Meyer was previously married to Cassandra Wain in 2008. The court documents show Meyer and Wain were married in Campbellsville, Kentucky on May 20, 2008 and reports questioned whether or not the two ever officially divorced.

Meyer, who was born and raised in Columbia, Kentucky, has previously made headlines for his military service as well – and just his relationship with Palin.

After completing basic training at the Marine Corps Recruit Depot Parris Island, Meyer was deployed to Fallujah, Iraq in 2007 as a scout sniper with the 3rd Battalion, 3rd Marines. He was later stationed in Afgahnistan in the Kunar Province during his second deployment and, on September 8, 2009, Meyer learned that three Marines and a Navy corpsman were missing.

Despite being bombarded by enemy fire, Meyer entered an area known to be inhabited by insurgents and found the four missing servicemen dead. He moved the bodies to a safer area, with the help of Afghan soldiers, and was awarded the Medal of Honor for his actions in a ceremony at the White House on September 15, 2011.

In September 2012, Meyer, with the help of co-writer Bing West, published the book Into the Fire: A Firsthand Account of the Most Extraordinary Battle in the Afghan War, detailing his experiences overseas.