On March 16, Google has chosen to celebrate the life of the world’s first professional female scientist. German scientist Caroline Herschel is on the front page of the search engine as the doodle on March 16. In the late 18th century her work, along with her equally celebrated astronomer brother William Herschel, became patronized by the British government, thus making her the first woman to paid for scientific work.

The next opportunity to celebrate her life won’t arrive until 2092, that’s the year when the comet named after her is expected to be visible from earth.

Here’s everything else you need to know about this incredible woman:

1. She Lived to Until the Age of 97 When the Average Life Expectancy Was 55

Herschel’s doodle celebration comes on what would have been her 266 birthday. She didn’t quite make it to that age, but the astronomer did live to be 97 years old. That’s at a time when the life expectancy in the world was just 55.

Her father, Issac, was a member of the Hanover Foot Guards, a defense army in her home city of Hanover in Germany. He was the bandmaster for the unit. In 1743, seven years before his daughter’s birth, Issac Herschel was severely injured in the Battle of Dettingen.

Along with her four brothers, Herschel was trained in music, something her mother, Anna, objected to. Anna Herschel believed that women should only be trained in household chores.

2. Originally, She Trained as a Singer Before Following Her Brother Into Astronomy

In August 1772, at the age of 22, Herschel followed her brother William to Bath in England where he was pursuing a career in music as an organist. Their father had passed away earlier in 1772. The Herschel duo was successful as William trained his sister in singing. Though she struggled to mix socially with people and had few friends in her new homeland.

As a way to pass the time at night, Herschel’s brother began to take up astronomy. She would assist him before he encouraged her to take it up in her own right and to start making her own observations. In the meantime, William Herschel had become King George III’s official astronomer. The position was not as lucrative as music had been for either sibling. For her part as William’s assistant, Herschel was paid the equivalent of $8,000 per year.

The time she spent as her brother’s assistant allowed her to make her mark on astronomy, between 1786–97, Herschel discovered eight comets. In 1783, she wrote in her diary:

I knew too little of the real heavens to be able to point out every object so as to find it again without losing too much time by consulting the Atlas.

But all these troubles were removed when I knew my brother to be at no great distance making observations with his various instruments on double stars, planets, and I could have his assistance immediately when I found a nebula, or cluster of stars, of which I intended to give a catalogue; but at the end of 1783 I had only marked fourteen, when my sweeping was interrupted by being employed to write down my brother’s observations with the twenty-foot.

Then, in 1797, Herschel rediscovered the Comet Encke. One biography says her telescope of choice was a 27-inch focal length Newtonian ‘sweeper.’

3. Herschel Never Married, But Was Very Close to Her Nephew

At the age of 10, Herschel suffered from a bout of typhus, meaning her growth was stunted. She only grew to just over 4 feet. Her father had apparently decided that his daughter would never marry and prompted his teaching her in music and other things. Herschel was also trained in numerous other household skills.

While she lived in England with her brother, he married wealthy widow Mary Pitt. This strained their sibling relationship slightly but in later years, Herschel would become close with her nephew, John. After William’s death, in 1822, she moved back to her home city and lived next door to John Herschel in a “simple house,” despite being one of the world’s most important scientists, according to this biography.

John Herschel wrote in his diary in 1823:

She runs about the town with me and skips up her two flights of stairs. In the morning, till eleven or twelve, she is dull and weary, but as the day advances she gains life, and is quite ‘fresh and funny’ at ten p.m., and sings old rhymes, nay, even dances.

Just prior to her death, she produced a nebulae of work so that her nephew could continue her efforts in astronomy.

4. There’s a Crater on the Moon Named for Her

Herschel had no shortage of honors, both during her life and posthumously. In 1828 the Royal Astronomical Society awarded her a gold medal, she was the first woman to receive this honor. It wasn’t until 1996 when Vera Rubin received the medal that another woman was afforded the medal.

She was a member of both the Royal Astronomical Society and the Royal Irish Academy, she was made a member of the latter along with Mary Somerville in 1836. One year before her death, she was given a gold medal by the Prussian Academy of Sciences which was presented to her by the King of Prussia.

Herschel has crater C on the moon named for her, as well as asteroid 281 Lucretia, which won’t be visible on earth until 2092. She was celebrated in Adrienne Rich’s 1968 poem “Planetarium.” Herschel is also one of the featured vaginas in Judy Chicago’s The Dinner Party art installation at the Brooklyn museum.

Herschel pictured at the age of 92. (Wikipedia)

Herschel was an extremely intelligent and insightful person. Her quotes are celebrated, her are some of the most poignant that celebrate her birthday, via 10 Best Quotes:

We do not judge great art. It judges us.

If men had to do their vile work without the assistance of woman and the stimulant of strong drink they would be obliged to be more divine and less brutal.

Femininity appears to be one of those pivotal qualities that is so important no one can define it.

One of the greatest gifts my brother and I received from my mother was her love of literature and language. With their boundless energy, libraries open the door to these worlds and so many others. I urge young and old alike to embrace all that libraries have to offer. 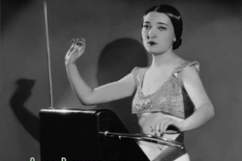