Father Rene Robert, a priest in Florida’s Diocese of St. Augustine, was found dead in Georgia. A suspect has been charged with his murder. (Getty)

Father Rene Robert, a priest in Florida’s Diocese of St. Augustine, was found dead at the age of 71 in central Georgia April 19. Robert, who has been missing for nearly a week, had served in the area for more than 35 years after being recruited while a Franciscan monk to teach at St. Augustine’s Florida School for the Deaf and Blind. Authorities were led to Robert’s body by the lead suspect in the case, Steven Murray.

Father Rene was remembered by the diocese as a “Servant. Faithful. Teacher. Franciscan. Advocate. A unique gift.” At first a Franciscan brother, Robert entered the priesthood to continue with his ministry for the deaf and eventually became a senior priest within the diocese. Police believe Murray, who was receiving counseling from Robert, killed him locally and abandoned the body in Georgia.

1. He Served in North Florida But Was Found in Central Georgia

Location of Waynesboro, Georgia, where Robert’s body was found, and Jacksonville, Florida, headquarters of the Diocese of St. Augustine. (Google Maps)

Father Rene served in the Diocese of St. Augustine, whose coverage area extends southwest from its Jacksonville headquarters to the northeast tip of the Gulf of Mexico, south to Daytona Beach, and north to the Georgia state line. Waynesboro, Georgia, where Robert’s remains were found, is nearly 200 miles from the diocesan borders.

Officials believe that Steven Murray kidnapped Robert near Jacksonville and drove the priest’s vehicle to Georgia, where he killed him and abandoned the car. He then made several trips from the Jacksonville area to South Carolina before being arrested and leading authorities to the body. While Murray has been charged with murder, a positive ID has not yet been made and authorities have not determined a cause of death.

2. He Met His Alleged Murderer Through Prison Ministry

Father Rene’s last living known whereabouts came from a Facebook check-in at Orange Park Medical Center in Orange Park, Florida, where he was visiting a patient. After this, according to investigators, Robert, who had a “very active prison ministry,” went to counsel Murray, who he had met through another woman he had been counseling, and attempted to help him despite being “warned” by the woman.

Speaking with the Washington Post following the discovery of Robert’s remains, Sheriff David Shoar of St Johns County, a personal friend of Robert, described this as typical for Robert:

Father was a gentle soul..a Franciscan, he always wore sandals no matter how cold it was out…Father Rene was certainly one of our better angels…he’d go out in the middle of the night and help people and give them money. People who had just gotten out of jail.

3. He Was Originally from New York but Moved to Florida to Work with the Deaf

A childhood photo of then Richard Wayne Robert, who would take the consecrated name Rene Robert. (Facebook)

Robert was born in New York City, adopted by the Robert family of Waterford, New York, and given the name Richard Wayne Robert. At three years old, his sister remembers, he went to church for the first time with his mother and, upon seeing the priest, ran up the aisle and remarked, “I want to go with him.” He took Franciscan vows in 1962, becoming Brother Rene Robert.

Family members describe then-Brother Robert as extremely generous despite being “a man who took a vow of poverty seriously.” His sister recalled to the diocese that he would frequently take his nieces and nephews to the movies, paying for their tickets, popcorn and candy. She also remembered his “tender spirit” during the loss of their mother:

I gave up on the Lord for a short time because I was angry that my mother suffered with cancer. But he helped me realize it wasn’t God’s fault that she died; it was the darn sickness, it was cancer. He said, ‘You will see her again someday,’ and I know I will because he made me believe. And that is why I know I will see him again, too.

4. He Became a Priest to Continue Work for the Deaf Community

Rene Robert soon after his consecration as a Franciscan brother. (Facebook)

Robert left New York in 1980 to begin teaching at the Florida School for the Deaf and Blind, a state-run day and boarding institution for audially and visually handicapped students. At the time, the school housed 600 Catholic students, and Rene, who was consecrated but not ordained, was having trouble finding a priest who could hear their confessions. This inspired him to attend seminary, and in 1989 he became Father Rene Robert, dividing his time between a typical parish and the deaf community.

6. He Was Popular for His “Energy” within Northeast Florida’s Catholic Community

Father Rene at a local blood donation event in 2015. (Facebook)

Rene was described by a fellow priest and the Diocese of St. Augustine as having the “energy of the Energizer bunny:”

In a couple of days’ time, he might show up at five, six or seven different events, such as gatherings for prison reform, hospital and nursing home visits, serving as a teacher or translator for the deaf. And he would perform his tasks quietly, without making noise about himself, the priest added.

A local parishioner remembered his continuing work with the deaf in a Facebook remembrance:

The diocese reported that without Father Rene, they would be forced to end several deaf Masses and deaf Catholic social events. 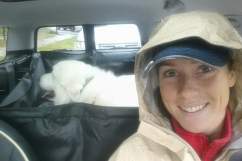