The Cascade Mall shooter has now been officially named by police as Arcan Cetin. This photo is from Arcan Cetin’s Facebook profile page. (Facebook/Arcan Cetin)

Arcan Cetin, identified by police as the Cascade Mall mass shooter, tweeted about voting for Hillary Clinton, and his blog contains praise for the ISIS leader.

Now it comes out that Cetin may face an investigation over accusations he voted illegally because he’s not a citizen.

Cetin was arrested on September 24 and is accused in the mass murder of five people in the Macy’s store at Cascade Mall in Burlington, Washington. Although Cetin was widely described as Hispanic in the media when he was not yet identified by name, his Facebook page says he is from Turkey. The Seattle Times newspaper says police first misidentified Cetin, a Turkish immigrant, as Hispanic, adding that police said they identified him as Hispanic based on surveillance photos and his dark hair.

However, it’s now emerged that Cetin was not a U.S. citizen, “meaning legally he cannot vote. However, state records show Cetin registered to vote in 2014 and participated in three election cycles, including the May presidential primary,” according to King5, which says he may face a separate investigation into his voting record.

What’s the evidence that he took a side in the presidential election, though?

A Twitter page in Cetin’s name (identified as his page by the New York Times) contains this 2015 post:

A Tumblr page in his name contains references to the phrase “Subhan Allah,” which means Glory be to God, as well as comments about serial killers. It links to a page, also identified as his by the Associated Press, that praises the ISIS leader and an Iranian Ayatollah. Police have not yet determined the shooter’s motive in the mall attack, according to The Seattle Times, and Cetin has a troubled past that includes domestic violence allegations. By one account, he called out a woman’s name while allegedly firing.

However, a woman has tweeted that the Hillary voting comment was a sarcastic response to a football game.

She claims he was actually a conservative and a member of a rifle club and ROTC. She writes that the Hillary Clinton comment related to a Green Bay Packers/Seattle Seahawks game. She has also posted political commentary of her own, though, as well as a post that Cetin made wishing people a Merry Christmas. Asked whether she actually knew Cetin, she responded “not at all.” Thus, it’s far from clear that her theory about Cetin’s tweet was accurate. However, it’s a theory.

@ArcanCetin was a conservative in rifle club &ROTC. This tweet is in response to the Seahawks beating Packers on Jan 18 2015 pic.twitter.com/9eVU9dspkZ

The Tumblr page is in the name of Arcan Cetin. It contains the exact same photo of Cetin that appears on the Twitter page in Cetin’s name; the latter Twitter page was identified by the New York Times as the alleged mall gunman’s Twitter page. The URL of the Tumblr site contains the words “arcanmotherrussiavodkaak47.” The Facebook page of the alleged gunman, identified as his by the Times and many other media outlets, contains numerous references by friends to his purported fascination with guns and Russia. The Associated Press has reported that the two Tumblr pages and the Twitter page were the 20-year-old Cetin’s.

On the Tumblr page, a post contains a reference to Allah and a person who responds uses the word Jannah, which is the term for the Muslim paradise.

A screenshot of a post on the Tumblr page in the name of Arcan Cetin.

This is the photo that was posted both on the Twitter page and the Tumblr page. It’s the one on the top right, and it appears to be from a set of photos. Cetin’s post on Twitter indicates that it was taken in 2014:

Here’s the same photo as it appeared on the Tumblr page (middle picture):

Under the photo on Tumblr, there is this comment, “meowfraulein I’m cute plez say yez jk.” Meowfraulein is the other Tumblr page that the AP says was Cetin’s. It bears this photo, as well as one of a Supreme Leader of Iran and a Julian Assange book cover with the words “Mein Kampf” added:

The above photo is of the leader of ISIS, Abu Bakr al-Baghdadi. The comment under it says, “My main dude, Abu bakr al big daddy. #al qaeda.”

The comment under the post links back to the first Tumblr page bearing Cetin’s photo and his name. In addition, the profile picture on the meowfraulein Tumblr page appears in the set of photos on the Arcan Cetin Tumblr page – in the same set as the photo that also appears on the Twitter page that the Times has identified as the alleged gunman’s.

The profile picture on the meowfraulein Tumblr page.

Country is for Republicans and confused Democrats.

He did give a shout-out to ROTC friends on Twitter:

Shout out to the ROTC peeps. Just realized Columbus Day and Navy's Bday are on the same day

His Facebook page makes it clear he is from Turkey:

A screenshot of the alleged gunman’s Facebook page. Although media reports described him as Hispanic, his page says he is originally from Turkey. (Facebook/Arcan Cetin)

A friend on Facebook wrote, “TBH: Cetin, you are hilarious bro :D It’s guys like you that make me love rotc.” Another friend wrote, “Truth is you are pretty good at rifle team but I think if I join I could do better Jk. Haha.”

Police released this photo on Twitter after capturing the alleged gunman. They wrote: “OFFICIAL: Here is a DOL photo of the suspect: Arcan Cetin, 20-yr-old Oak Harbor resident.” (Facebook/Arcan Cetin)

Another friend wrote on Cetin’s Facebook page in 2012, “You remind me of Wrath, cuz you know a lot about weapons and stuff, and I can imagine you taking out a lot of soldiers by yourself. :o”

Another friend mentioned black ops conversations in math class: “Truth is…You are hilarious! I miss having math class with you and we would talk about black ops! :)”

Most of Cetin’s public posts on Facebook and Twitter, though, don’t appear to be political in nature outside the above, although friends wrote that he had a strange affection for Russia.

He wrote a comment under a man’s letter to a local newspaper. The letter writer was supporting President Obama and the Democratic agenda, and Cetin wrote in response, “Sounds like communism to me.”

In one Facebook message on his page, though, a friend wrote, “Truth is: You are a very odd character. You were always going on about being Russain and stuff like that, but under that you really supported America (or so it seemed to me) and I always thought that was really cool. Maybe we will have ROTC together again next year! :D even if we don’t, try to keep up with the Mother Russia thing!”

Cetin responded: “haha thx im still goin at it. I have 1st period rotc.” Cetin even wrote a comment in Russian on his page.

The New York Daily News reported that Cetin “is a legal, permanent resident that lives in Oak Harbor.” However, he was not a U.S. citizen and thus not able to vote, said King5. 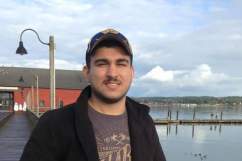 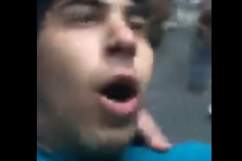