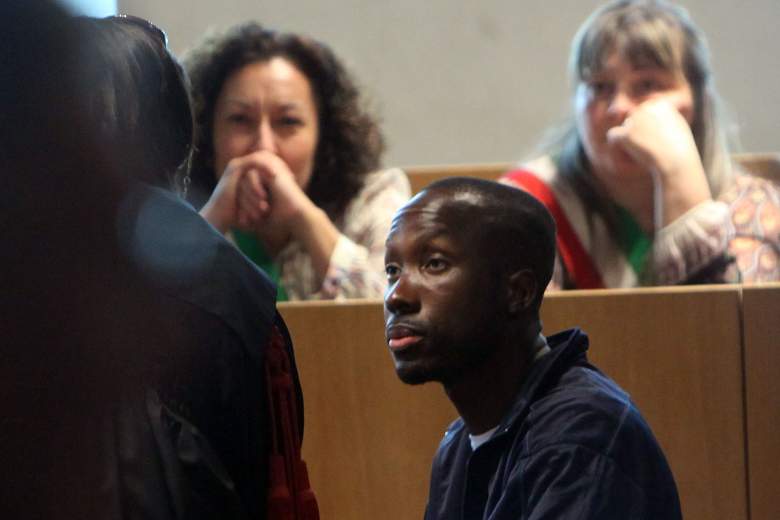 Rudy Guede testifies during the appeal hearing of Amanda Knox over the guilty verdict in the murder of Meredith Kercher in Perugia’s court of Appeal on June 27, 2011 in Perugia, Italy. (Getty)

Rudy Guede was born on December 26, 1986, in the Ivory Coast. He was 20-years-old at the time of Meredith Kercher’s death, and is currently serving a 16-year prison sentence for her murder.

Guede lived in Perugia since he was five-years-old. He had a difficult relationship with his father, who decided to eventually return to the Ivory Coast, forcing Guede into social services.

Guede has testified that on the night of the murder, he and Kercher arranged to meet at her house around 8:30 pm. The two were intimate that evening, but did not have sex, since neither had a condom. Guede claims that Meredith grew angry after discovering that her rent money was missing, and blamed Knox for stealing it. Guede then used the bathroom with his iPhone headphones on, at which point he heard Meredith scream, and ran back to the bedroom, to find that a man had stabbed her and run away, saying, “Black man found, black man guilty” as he exited the apartment.

After the incident, Guede claims he tried to clean up Meredith’s blood with a towel. He eventually gave up, and went to a friend’s house around 11:30 pm. He then made his way to a nightclub, where he stayed until approximately 4:30 am.

1. He and Kercher Kissed the Night Before She Was Killed

Amanda Knox Documentary – Sex, Lies and the Murder of Meredith Kercher (2008)Meredith Kercher was murdered by Rudy Guede in early November 2007. Before catching Guede, Italian police falsely implicated Amanda Knox, Raffaele Sollecito, and Patrick Lumumba in the murder. Mr. Lumumba was released when he was proven to have an alibi. Rudy Guede was convicted in a fast-track trial and sentenced to thirty years in prison, which was reduced to sixteen years on appeal. Amanda Knox and Raffaele Sollecito were convicted, then exonerated in a second trial, then convicted in a third trial. But after an appeal, Knox and Sollecito were fully exonerated on March 27, 2015 by Italy's highest court. Here is a bizarre and creepy video of the killer, Rudy Guede, saying things like "I'm a vampire, I'm going to suck your blood," less than nine months before he killed Meredith: https://www.youtube.com/watch?v=iqI5_hOrUFA Amanda and Raffaele are innocent! One day the truth will set them free. ___ Information about this Amanda Knox documentary: this episode of the British TV series "Cutting Edge" examined the murder of Meredith Kercher in Perugia, Italy. The episode aired April 17, 2008. The episode has also been previously posted on YouTube under the title "The Story of Amanda Knox."2013-10-26T06:33:31.000Z

Four men lived in the basement flat below Knox and Kercher’s Via della Pergola 7 apartment. One of these men, Giacomo Silenzi, had known Rudy Guede since the year before Kercher’s death– he had met Guede while playing basketball on the court above the Via della Pergola residence. According to a document obtained from Criminal Law and Justice Weekly, Guede had been to Silenzi’s apartment on “several occasions” when both Knox and Meredith were present. The document reads, “It appears that Guede was attracted to Knox, who on their first meeting was single and unattached.” Guede had reportedly met Kercher about three or four times before her death.

The night before the murder– October 31, 2007– Kercher and Guede kissed on the dance floor of what the Daily Beast reports Guede describing as a “college scene.” The next night, Kercher invited Guede over. He happily agreed to come to her apartment.

2. He Was a Drug Dealer and Well Known by Police

According to an article written by the New York Daily News in January, “Guede was well known to police as a local drug dealer and was arrested after cops found his bloody fingerprint at the scene.”

On January 21, Rudy spoke publicly for the first time outside a court of law since Knox and Sollecito were acquitted (March 27, 2015). In the two hour long interview, which was with Italy’s RAI TV3, Guede argued that he had never tried hard drugs, and that “his record shows that despite reports to the contrary, he had no previous convictions for any crimes.”

Guede then went on to say that Knox was “101%” at the scene of the murder– he failed, however, to name Sollecito. According to The Daily Beast, Sollecito spent the week before the interviewed aired threatening to sue Guede if he did point the finger at him.

3. He Was Arrested Just Days Before Kercher’s Murder 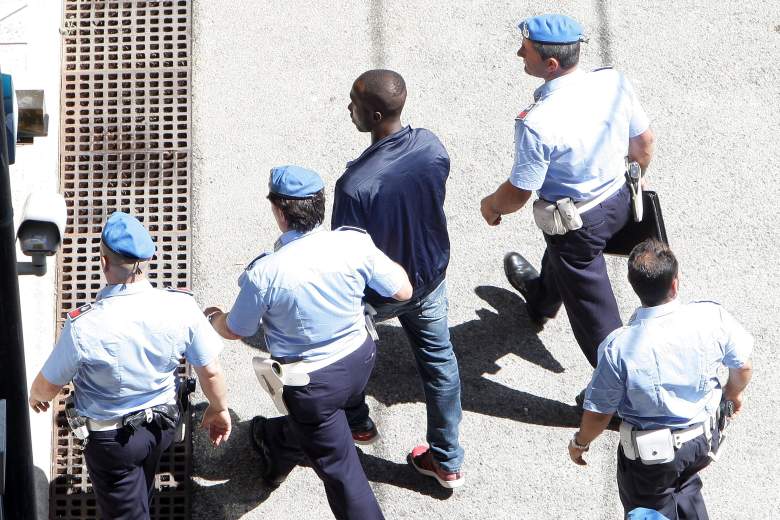 On October 27, 2007, a principal at a nursery school in Milan said she found a strange figure coming out of her office– the man was identified as Rudy Guede. When police arrived at the scene and asked him to open his backpack, they found a 40 cm kitchen knife, which was taken from the kitchen nursery, according to The Murder of Meredith Kercher. They also found a small hammer, keys, and a watch.

By the time Guede was charged with possession of stolen goods, he was in custody for Meredith’s murder.

4. He Fled to Germany After the Murder 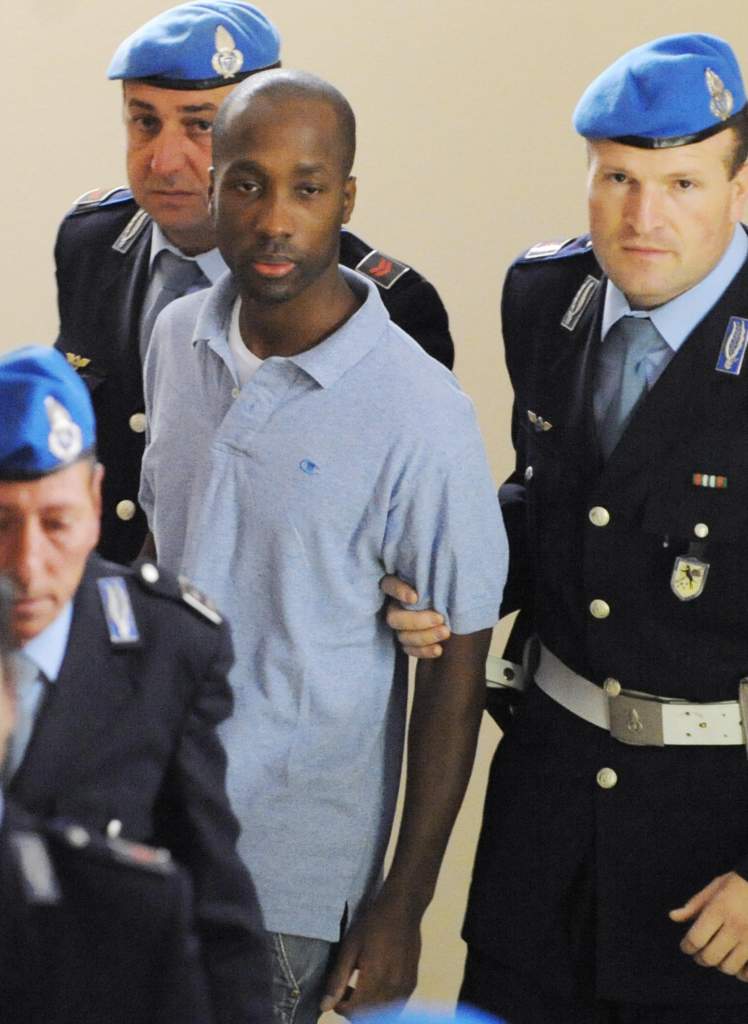 One of the three suspects in the murder of British student Meredith Kercher, Rudy Guede from the Ivory Coast, arrives at a court hearing in Perugia on September 27, 2008. (Getty)

When police identified Guede’s DNA at the crime scene, they tried to contact him. Guede had fled to Germany, though, and was stopped trying to board a train without a ticket, at which point he was extradited to Germany.

According to The Daily Beast, Guede claims he fled the scene (Kercher’s apartment) “out of a combination of fear and paranoia that he conveniently regrets.” He then left the country merely because that was “where the next train was going, adding that he might have just as easily ended up in Russia.”

5. His DNA Was Found All Over the Crime Scene 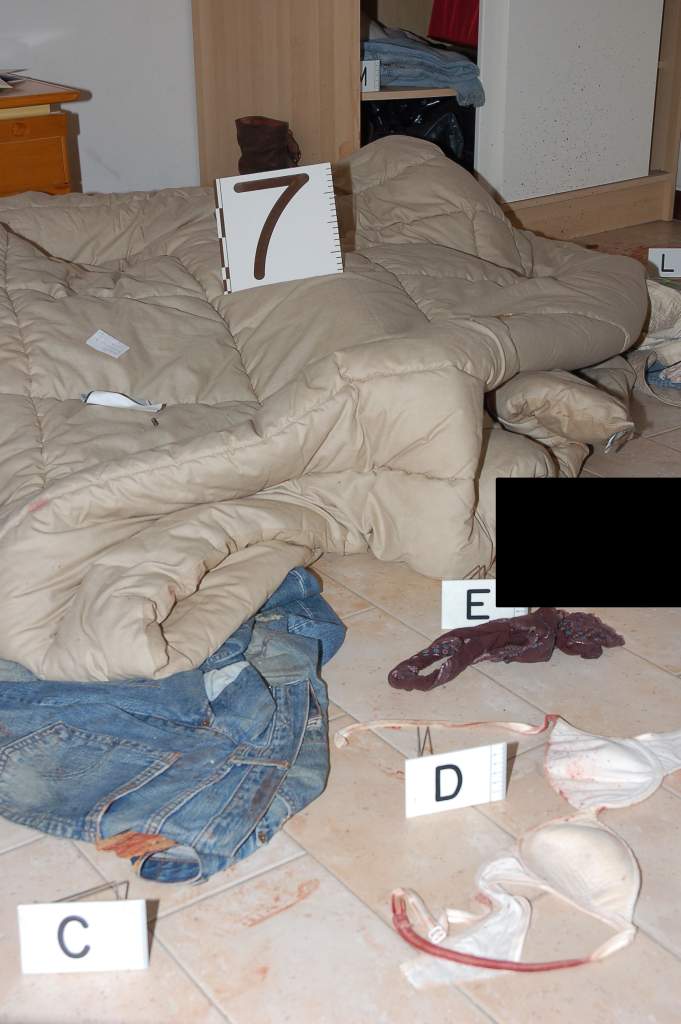 (Italian Police via Injustice in Perguia)

Guede’s DNA was also found inside Kercher– although according to CNN, it still isn’t clear if Kercher was sexually assaulted. The news outlet added on that Guede’s prison writings have described how difficult it has been for him to “get the image of the blood that flowed from Meredith out of his head.”

According to The Daily Beast, Guede has been eligible for work release for the past two years. He has chosen, however, to stay in prison and focus on his studies. He will be eligible for parole in 2018.

Amanda Knox Today: The Photos You Need to See

Read More
Documentary, Netflix
Rudy Guede is serving time for the 2007 murder of Meredith Kercher. He still claims that Amanda Knox was involved in Kercher's death.