Parker’s Real Maple entered the Shark Tank in Season 8 with its syrup, cotton candy and butter made from real maple.

We interviewed its 18-year-old owner, Joshua Parker, whose interest in working with maple was sparked after an elementary school field trip. He told us that his products can be found in mom-and-pop stores throughout the Northeast and will be soon be launching in Costco. His future plans include markets like Whole Foods, Sprouts, World Market and Wegman’s.

When I went on a school field trip as an 11 year old in 2009, I was just captivated by the idea that I could go into my backyard, hang a bucket from a tree, collect the sap, and end up making a delicious syrup. It was something that I enjoyed doing, and really the first thing I could do totally on my own. I felt free when I was making syrup. I still do.

Making it Onto ‘Shark Tank’

Listen to Joshua on @theblazeradio tomorrow!

I applied to Shark Tank through an online application after years of dreaming to do so. I had never felt like I, nor the business, was ready. But with some strong sales in Q4 of 2015, my decision to take time off from school, and my development of proprietary production techniques, I knew I had to apply. I certainly do not regret it.

An advisor of mine that I met through the industry is closely connected with the Beck family and thus connected me with Glenn. Going on the Glenn Beck Program for a live, one-on-one interview was really a turning point for the company. The resulting sales allowed me to invest in production capacity and gave me the confidence to approach large, national accounts. By the end of 2015, Parker’s could be found in 550 stores from Massachusetts to California.

Balancing School With Running a Business

Parker's Real Maple is a company built on big dreams, hard work, and an unwavering dedication to creating the best real maple products in the world. I am so excited to introduce you to our new look that captures the entrepreneurialism and innovation at the heart of our all-American Story. Thank you for sharing in our journey! Joshua Parker CEO / Founder Parker's Real Maple www.parkersmaple.com

Time has always been the most scarce commodity in growing Parker’s Maple. Starting the company as a freshman in high school meant balancing it with sports, school, and what could be salvaged of a social life. I did it in the only way I knew how, not sleeping very much, often staying up for 40 to 50 hours at a time, and missing school often.

Plans for a Sweet and Maple-y Future

Shark Tank is a platform from which companies grow and people achieve their dreams. My plan going forward is to work night and day to make the most of what Shark Tank will do for the company- that is, create unique and nearly ubiquitous consumer demand. I will continue to bring our current products into the national space and over coming months and years, introduce new innovative products to continue our mission of making real maple an everyday item! 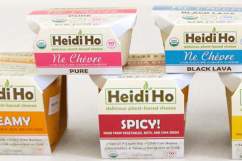 Heidi Ho After ‘Shark Tank’: Interview With the Owner